Disney Animation’s Moana will sail into theaters in late 2016 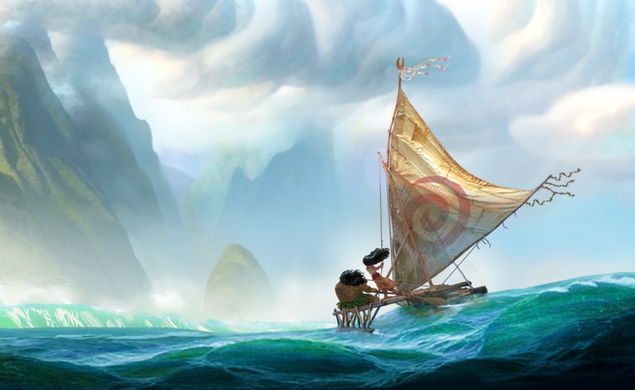 Following a creatively fallow period in the early aughts, Walt Disney Animation Studios has been resurgent in recent years, with critically and commercially successful features like Tangled, Wreck-It Ralph, and especially last year’s unstoppable Frozen. It remains to be seen whether the trend continues with the upcoming Big Hero 6, which invites the Marvel universe into the Mouse House for the first time; but if momentum is any indicator, Disney appears to be on a roll. Just today, the company announced that its upcoming feature Moana, originally slated for 2018, is now scheduled for late 2016 instead. What that means for Zootopia, the Disney feature currently slated for March 2016, remains to be seen; given that Disney has no films currently lined up for next year, it could get bumped up, or perhaps 2016 will just be a really big year for Disney feature animation.

Along with the release date, Disney released some more tidbits of information about Moana, including an official plot synopsis and some concept art (seen above). Heading up the project are Ron Clements and John Musker, the team responsible for second-golden-age Disney films The Little Mermaid and Aladdin, as well as the underappreciated Princess And The Frog. Given that those movies are all partly responsible for expanding (and diversifying) the Disney Princess canon, Moana’s synopsis bodes well for a strong, interesting new female character, something Disney seems to have been focusing more and more on in recent years. Here’s the official word:

In the ancient South Pacific world of Oceania, Moana, a born navigator, sets sail in search of a fabled island. During her incredible journey, she teams up with her hero, the legendary demi-god Maui, to traverse the open ocean on an action-packed voyage, encountering enormous sea creatures, breathtaking underworlds and ancient folklore.

“Breathtaking underworlds” and “ancient folklore” certainly sounds like the sort of material Clements and Musker could have a lot of fun with, given their history with Disney. Like most recent Disney features, Moana will be CG-animated, though earlier reports on the film suggested that it would have a hand-drawn style akin to the fabulous, Oscar-winning Disney short “Paperman.” The image above doesn’t bear that out, but it is just concept art, so who knows? What we do know is that Moana is apparently promising enough for Disney to bump it up two full years. If that’s not reason to be cautiously optimistic, I don’t know what is.