Our next Movie Of The Week: Judd Apatow’s The 40-Year-Old Virgin 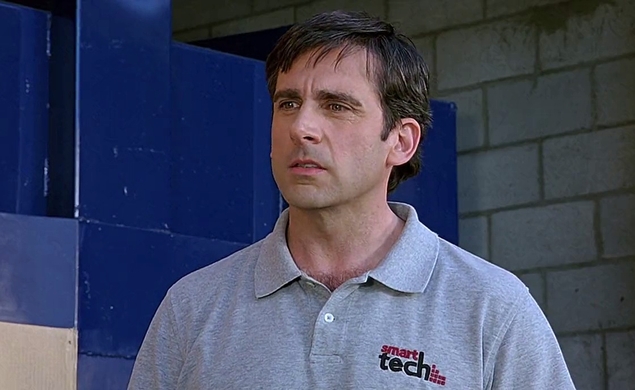 Judd Apatow’s The 40-Year-Old Virgin, a buddy comedy about one man’s righteous quest to get laid, was only released nine years ago, but it already feels like the product of a far off time and place, a curious era where DVD/VCR combos still had a place in civilized society, Judd Apatow was a first-time director and not a one-man film industry, and Mindy Kaling, Kevin Hart, and Jonah Hill were readily available for bit parts in low-budget movies. It’s hard to overstate the impact Apatow’s deceptively sleepy-looking effort had on film and comedy as a whole. The 40-Year-Old Virgin marked the beginning of what can be deemed “the Judd Apatow era of comedy,” and helped popularize improvisation as a central tool in the creation of cinematic laughs. It also helped transform cast members like Steve Carell (who also co-wrote the screenplay with Apatow), Seth Rogen, Paul Rudd, Elizabeth Banks, Jane Lynch, and Leslie Mann into bonafide movie stars.

Yes, The 40-Year-Old Virgin was the little sex comedy that could, a modest sleeper that has become one of the best loved and most influential American comedies of the past 50 years. It’s an appealing exploration of a couple finding love in middle-age, as well as a hilarious romp that reminds us that life is not just about butt-hole pleasures; it’s also about connection, family, and love. So please do hang out with us next week while we wind down a month of blockbusters and discuss this classic piece of raunchy Americana, with the usual Keynote and Forum on Tuesday and Wednesday, and an essay from Noel Murray about Judd Apatow’s pre-Virgin filmography on Thursday.

Upcoming Movies Of The Week
August 4: The Double Life Of Veronique
August 11: Phantom Of The Paradise
August 18: MacGruber
August 25: Out Of Sight