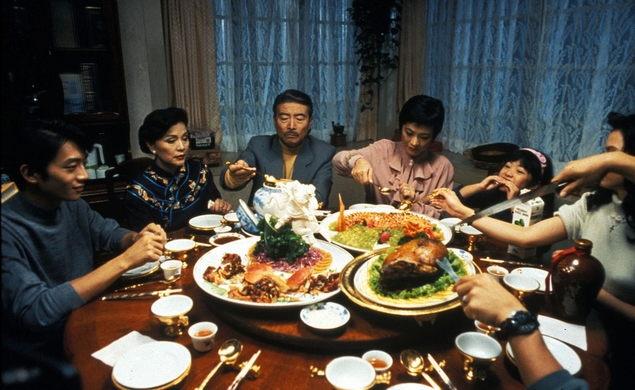 Ang Lee had some minor arthouse success with his first two movies Pushing Hands and The Wedding Banquet, but his first substantial hit—and first great film—was 1994’s Eat Drink Man Woman, a gentle melodrama about an aging patriarch  named Chu (played by Sihung Lung) who meddles in the lives of his bachelorette daughters in Taipei. One of the great food movies, Eat Drink Man Woman revolves around the weekly family dinners cooked by Chu, a former master-chef who’s been losing his sense of taste, but who still prepares gorgeous-looking meals, out of a grudging sense of obligation. Lee and his co-screenwriters James Schamus and Hui-Ling Wang don’t shy away from the metaphorical implications of an emotionally distant father with dulled senses, but while Eat Drink Man Woman is very open about its themes, it’s still sneakily powerful in the way it explores the secret desires of each of Chu’s girls, and how they have to defy their dad to grow up. These characters are all likable, and their interactions are subtle even when the plot is broad. Lee would soon bring his ability to evoke these kind of plausible performances to films as diverse as Sense And Sensibility, The Ice Storm, Crouching Tiger Hidden Dragon, and Brokeback Mountain. But it all springs from the style he first mastered with Eat Drink Man Woman, whicb airs tonight on TCM at 8 p.m. Eastern.