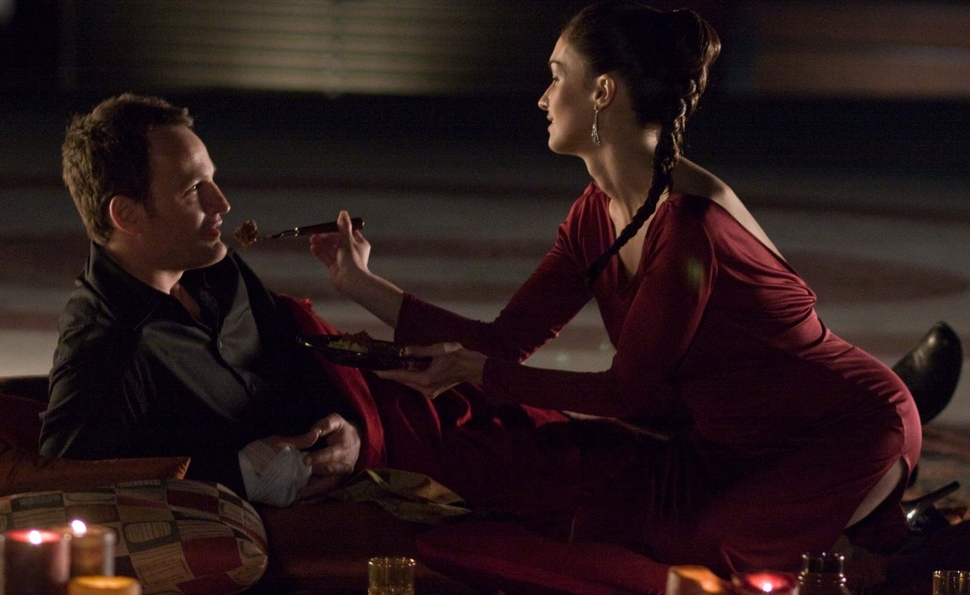 Welcome to You Might Also Like?, which uses the recommendation engines of online-streaming services to push brusquely past the ubiquitous studio movies everyone’s talking about, en route to weird, little-known detours and dead ends that are hopefully more compelling. Some of these connections are ephemeral, while others have clear, direct links to their starting points—such as 2008’s The Human Contract, a morbidly fascinating vanity project from writer/director/co-star Jada Pinkett Smith.

Netflix recommends The Human Contract for folks interested in Pacific Rim because it shares cast member Idris Elba with Guillermo Del Toro’s monsters-vs.-robots epic. Elba is a good starting point for this feature: He’s a great actor whose undiscriminating ways have led him to figure prominently in the popular choice for the best television show ever made (The Wire), some big movies (American Gangster, Prometheus, Thor, 28 Weeks Later), and some unwatchable dreck, from the Madea-free Tyler Perry movie Daddy’s Little Girls to the godawful Fatal Attraction knockoff Obsessed. In his Human Contract role as Larry, the chief legal consultant to Julian (Zero Dark Thirty’s Jason Clarke), Elba isn’t called upon to do much more than look good in a suit and express mild chagrin bordering on outright irritation when Julian does things like nearly beat a man to death. Meanwhile, the company Julian and Larry work for is on the verge of closing a $5 billion deal.

It’s rare to encounter a film that sets out to say so much, yet says so little. With The Human Contract, Pinkett Smith seemingly attempted to make a movie about everything: sex, class, ambition, conformity, philosophy, business, family, marriage, and the way sins ricochet through generations.  It’s as if she decided, in the interest of economy, to consolidate three separate scripts—an erotic thriller about a tormented man whose mind and libido are liberated by a sexy siren, a business drama about an ambitious branding genius on the verge of realizing his dreams, and a tortured family drama about a haunted man coming to terms with the sins of his past—into one ridiculously overstuffed extravaganza. The Human Contract is so overloaded with clumsily delivered exposition that it’s easy to imagine Pinkett Smith giving Clarke a 300-page rundown of his character’s backstory, with the caveat, “Only about 5 percent of this actually makes it into the film, but for instance, the fact that your character wouldn’t pay for his high-school girlfriend’s abortion informs several later scenes on a subliminal level.”

The film opens with Julian at a glamorous bar, confronting the full seductive force of the quirkily named Michael (Paz Vega), who suggestively fondles a thin cigar and drinks Shirley Temples. When Clarke expresses a desire for something “red” to drink, Michael leans over the bar in her skimpy little dress and fixes it for him herself, illustrating both her cavalier disregard for social propriety and her laissez-faire attitude toward flashing her genitalia at strangers in bars.

Vega’s character is half sexual cyclone destroying all in her path, half quirky life-lover lifting the spirits of the men she seduces. And she’s unconvincing on both counts. It doesn’t help that Michael speaks largely in fortune-cookie aphorisms like, “Goodness is only a requirement for acceptance, not greatness,” “We must always be who we really are, even in the chaos, for that is where we create,” and “There are blessings in pain… You just need the strength to open those locked doors, see what it is, know it and move on, otherwise it will steal what makes us beautiful, and feed our monster.” She’s a cross between Sharon Stone in Basic Instinct and Deepak Chopra.

The best time to consume erotic thrillers is around age 12. Twelve-year-olds understand on a primal, physiological level why protagonists are irresistibly attracted to femmes fatale: They’re sexy, they have boobs, and they are all about introducing hapless patsies to light bondage, voyeurism, public sex, and S&M. For adults, however, much of the erotic-thriller universe falls under the exceedingly broad heading of “Not really worth the trouble.” Sure, Michael is sexy and bold, and promises to shake up Julian’s ’s business-fixated existence, but she’s clearly a handful, and he has so much else to worry about that in the interest of efficiency, he should reject a sordid sexual fling out of hand.

During his first conversation with Michael, Julian stammers that he’s in the “brand-management business,” which initially sounds like the kind of generic business-person job that involves nothing more than wearing a suit regularly and having a nice apartment. But one of the film’s many idiosyncrasies is that it’s deeply invested in Julian’s job, company, coworkers, and professional future. Until the third act, when it completely loses interest in Julian’s business life right around the time it should ostensibly be climaxing with the winner-takes-all pitch meeting for that $5 billion account. By that point, however, the film has gotten so distracted by its leisurely journey through the wreckage of Julian’s family life and tortured affair with Michael that it seems to have forgotten that Julian is a businessman.

But before The Human Contract drops Julian’s all-important/unimportant business future, it provides various scenes where he and his sharp-suited (Elba and Ted Danson) sit at conference tables in offices with glass walls, spouting jargon-heavy prattle like, “The Praylis Group is looking to consolidate its creative premium by absorbing a boutique company, like ourselves, into the fold to manage all of their brands.” This early scene establishes Julian as a Don Draper-like super-genius who intuitively figures out that brands want to be associated with popular values and ideals. And also babies. And Jesus. To that end, Julian proclaims, “America has a new face, but no specific culture in which to experience it.” Like so much of Pinkett Smith’s script, that sounds vaguely smart, but is ultimately a strange combination of annoying and meaningless.

The next time Julian sees Michael—when he really should be focusing on winning that $5 billion account—she’s gallivanting about in a graveyard with her artsy bohemian friends, watching Frankenstein, her favorite film. This spurs her to discourse on the story’s metaphorical underpinnings in a scene that climaxes with Julian punching Michael’s French ex-boyfriend in one of many fits of rage. Michael is turned on by Julian’s mercurial temper and predilection for punching things/people, prompting her to show him her scars—of both the figurative and literal variety—and they launch into an explosive sexual affair.

In the grand tradition of erotic thrillers, Michael sexually ups the stakes by blindfolding Julian in the backseat of a limousine, then videotaping him canoodling with one of her hot friends. Julian is not amused, and is even less happy to learn Michael is in an open marriage, an inconvenient fact she neglected to share. Then again, the world never stops enraging Julian, who has a Hulk-like temper under the best of circumstances. In one of a number of plot threads begging to be relegated to the cutting-room floor, Julian is so enraged by his brother-in-law’s abusive behavior—Pinkett Smith plays his sister—that he pummels him, then smashes him in the face with a brick, sending him into a coma. (Julian’s rage also incongruously causes the character to slip into Clarke’s Australian accent.)

Julian doesn’t limit his violent outbursts to bullies or men, as seen later in the film, when he smacks the masochistic Michael to the ground. Julian isn’t just mercurial and violent; he’s deeply unhinged. Thankfully for him, it turns out his dysfunctional behavior can be traced back to when he was 10 years old and stumbled upon his mother’s failed suicide attempt, a flashback the film teases sadistically, then reveals as the Rosetta Stone that explains all Julian’s rage and confusion. The film’s deep immersion in bullshit psychology culminates with Julian finally confronting this formative trauma and emerging a changed man. 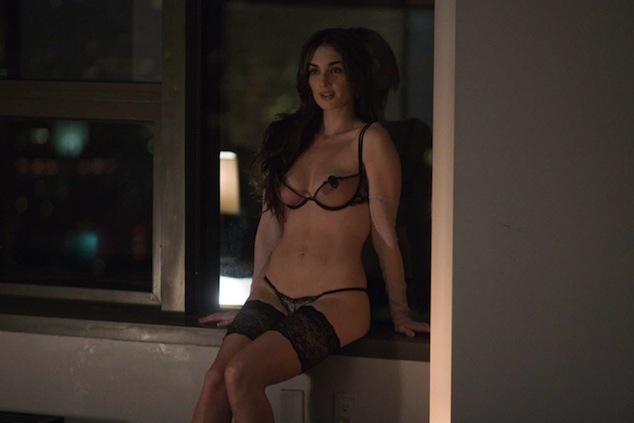 The Human Contract plays like an elaborate exercise in misdirection. Viewers are promised a sexy thriller about a man whose world is transformed by an affair with a dangerous stranger, and are instead saddled with a tortured, leaden, grotesquely overstuffed family melodrama about a troubled man finding the strength to overcome his past. At 107 minutes, The Human Contract feels endless, but there’s so much left undeveloped (what happened with that $5 billion account?) that it easily could have been half an hour longer and even more torturous. The film deserves credit for defying expectations and delivering a personal, distinctly bonkers vision, but this overloaded, overstuffed mess also ultimately falls under the heading of “not really worth the trouble.”

That should hold true even for folks who are absolutely crazy about Pacific Rim, and think they can’t get enough of the bulletproof, handsome Elba, who got them into this mess in the first place. At least Elba scores the film’s only laugh, when he asks Julian, with just the right note of deadpan matter-of-factness to capture the unacknowledged absurdity of the film, “Were you in a graveyard watching a movie recently?”