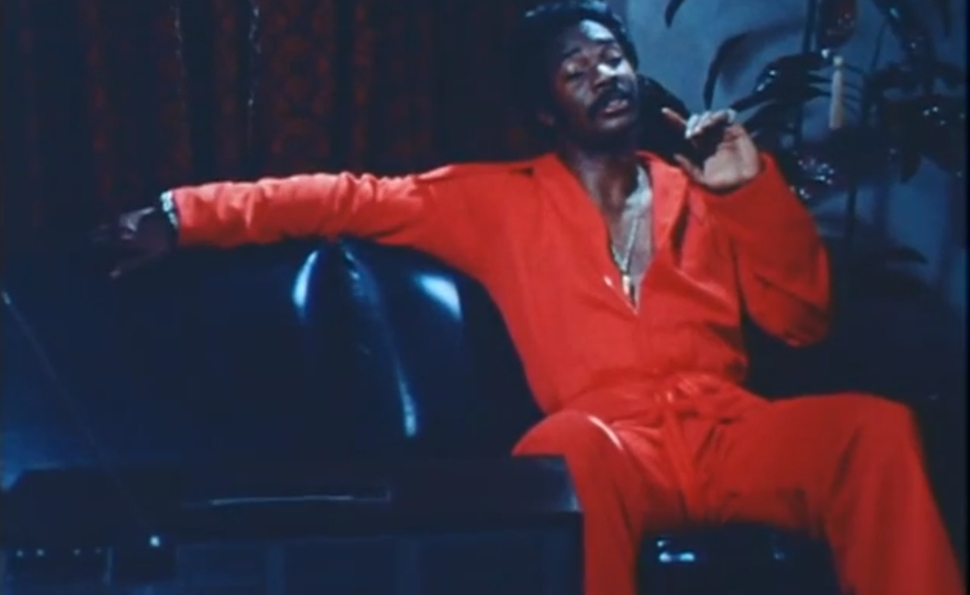 We begin this entry with About Last Night, the new remake of the 1986 Rob Lowe-Demi Moore vehicle of the same name, adapted from David Mamet’s play Sexual Perversity In Chicago. This in turn leads Netflix to recommend Never Die Alone, a grim neo-blaxploitation adaptation of a novel by pulp author Donald Goines. That film partnered DMX with Michael Ealy, a star of About Last Night. At this point, things get interesting. Through Never Die Alone and its cyber-pimp Netflix, I discovered a movie with a premise so insane and provocative, I was shocked I had never heard of it before: It’s about an ex-con who murders people with his giant, magical penis. (No, it’s not a documentary.) Netflix, the seemingly sane and rational purveyor of motion pictures of varying levels of quality, recommended 1975’s Soul Vengeance, a movie that might boast the single most outrageous hook in a subgenre that placed a premium on novelty.

Soul Vengeance set out to top the outrageousness of blaxploitation, the most flamboyant of 1970s subgenres, while simultaneously commenting on the insidious nature of racism in contemporary American society. The film’s bifurcated agenda and personality is reflected in its two titles: I purchased the film as Soul Vengeance from blaxploitation specialist Xenon, but on the IMDB, it’s listed as Welcome Home Brother Charles.

Welcome Home Brother Charles is an appropriate title for a sober-minded exploration of an ex-convict’s attempts to make something of himself in a white man’s racist world; it reflects the social consciousness of director Jamaa Fanaka. Fanaka was a member of the L.A. Rebellion movement, which set out to expand the parameters of African-American independent film in the 1970s, and included such illustrious, semi-obscure figures as Charles Burnett and Julie Dash. Soul Vengeance, on the other hand, is an appropriately vulgar title for a deranged, often amateurish B-movie about an ex-convict who hypnotizes women and strangles men with his freakishly oversized penis. These two films—the earnest, pain-filled exploration of the black man’s angst, and the nutty exploitation movie about a killer cock—co-exist uneasily, although at any given point, one movie is dominant.

This duality reflects the complicated nature of blaxploitation movies: Sometimes they managed to Trojan-horse insightful social commentary and genuine subversion inside pulpy, crowd-pleasing packages. More often than not, though, they used their low-budget indie freedom for prurient rather than political purposes. Blaxploitation movies could get away with just about anything. They were not subject to the same limitations of taste and professionalism that dictated studio movies; they were wild, raw, and appealingly homemade. As long as these films provided audiences with the expected quota of sex, drugs, violence, and cracker motherfuckers getting what’s coming to them, they could experiment as freely and extravagantly as they pleased.

At best, Welcome Home Brother Charles makes smart, inspired use of this freedom, as in this remarkable sequence, which does absolutely nothing to advance the plot, but instead offers two minutes of life as it was lived by everyday people in Watts and Compton in the mid-1970s. It feels more rooted in the documentary tradition than in narrative.

This sequence acquaints viewers with the grubby, grungy world that protagonist Charles Murray encounters upon leaving prison, but it’s powerful in and of itself. Again, the filmmakers are able to take advantage of blaxploitation’s freedom to deliver strong medicine, like the image of a junkie sticking a needle into a bloody vein while, on the soundtrack, a singer croons, “Momma’s got a whole lot of money, putting it up her nose / Daddy’s in the kitchen, working on an overdose.”

Marlo Monte stars as Charles, a small-time drug dealer who’s nearly castrated by corrupt, rage-filled police officer Harry Freeman (Ben Bigelow). In court, a prosecuting attorney with the single saddest mustache of the 1970s lays out the case against Charles in the most hilariously hyperbolic manner possible, droning, “Before you are cross-examined, Officer Freeman, I’d like to take this opportunity to commend you for your fine exhibition of unselfish and calm action to help your friend and fellow officer in a time of desperate peril. What this community needs is more Officer Freemans. More Officer Freemans who have the guts to stand up for what’s fine and decent in this country. This is the perfect case to cite for the bleeding hearts that would have us turn maniacs like the defendant loose to crack the collective skull of society with their devilish bricks, to shoot down innocent people in the streets with their diabolical guns!”

Charles is appropriately apoplectic upon being described as a maniac intent on cracking the collective skull of society, but his words of outrage fall on deaf ears. The judge isn’t about to let a black man like Charles free, especially since Charles knows first-hand that the judge is also a dedicated client of black prostitutes in Watts and Compton.

The first act of Welcome Home, Brother Charles/Soul Vengeance is technically crude even by the exceedingly lenient standards of blaxploitation. The sound is muffled, the dialogue is sometimes difficult to make out, and the performances are all over the place. But the film has a woozy intensity that’s hard to shake off, especially once Charles enters prison and the film’s style becomes moody and abstract. This hypnotic mood is aided by a haunting theme that combines percussion with what sounds like mocking, distorted laughter.

Welcome Home Brother Charles eventually builds into a horror movie that’s more about the scourge of racism than about the monster inside Charles’ trousers. In that respect, Charles’ penis—which may be the result of prison experiments, or may be supernatural in origin, it isn’t entirely clear—represents the return of the repressed: It is the monster created by a racist culture’s obsession with denying the masculinity of black men at any cost, including castration.

Writer-director Fanaka takes a page out of the Jaws playbook when it comes to the big reveal of the protagonist’s enormous penis, which is so incredibly huge and powerful that it can choke a grown man to death. Throughout the second half, the film teases that something very strange has happened to Charles in prison, without revealing precisely what it is. Even after Charles begins using his penis to hypnotize the wives of the men who put him in prison, we still don’t see the appendage; Fanaka uses the magic of editing and suggestion to imply its existence instead.

But he can’t hold the inevitable off forever. Audiences for a movie about a man with a murder-penis are eventually going to want to actually see it, because they’re only human, dammit. Fanaka was probably worried that if he included too many shots of people being strangled by an enormous cock, the whole film might begin to feel a little—I hesitate to even use this word, but—well—silly. But he knows he has to make the big reveal count, so he holds off until the very end, when Charles unleashes his trouser snake of righteous fury on the nerdy prosecutor who earlier accused him of trying to crack the collective skull of society with his devilish bricks. The entire film comes down to this one sequence, which is jaw-dropping for any number of reasons (and looks a bit like the uncredited work of the Jim Henson Creature Shop).

In the end, the Soul Vengeance side of the movie emerges victorious. This is a lurid B-movie with something on its mind, not an overlooked, socially conscious masterpiece. But Fanaka gives this movie a core of genuine pain. That’s not quite as impressive an achievement as strangling a man with your grotesquely oversized penis, but it’s remarkable in its own right.