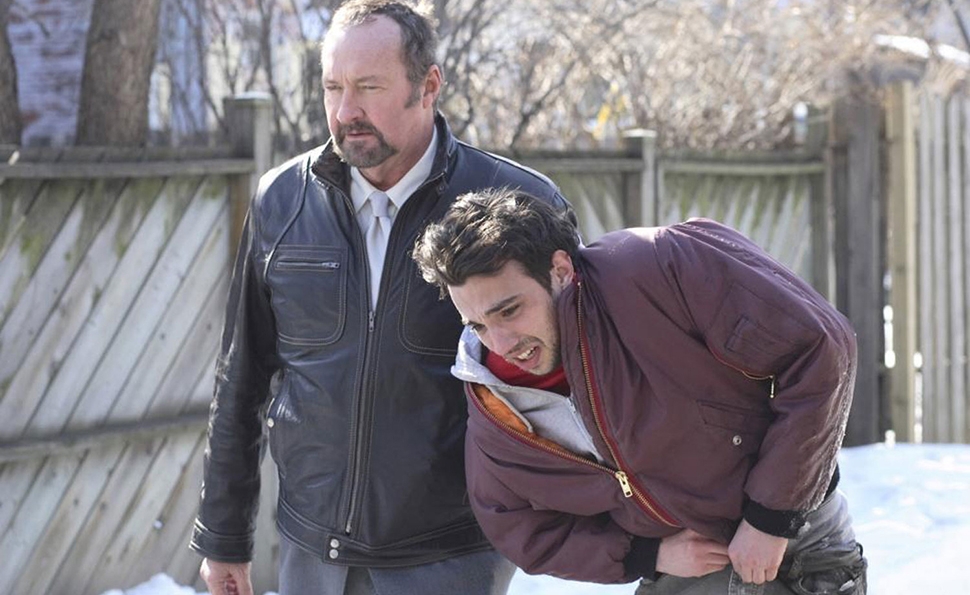 We begin this entry with The Starving Games, Jason Friedberg and Aaron Seltzer’s irreverent take on the Hunger Games franchise—plus, if previous Friedberg/Seltzer efforts are any indication, all of the top 20 most Googled subjects of the past 12 months. (Justin Bieber might be in for some manner of satirical drubbing, along with the Kanye West/Kim Kardashian partnership. It’s even possible that Lady Gaga will be given the business.) From there, Netflix’s recommendation engine segues from the comic black hole that is Friedberg and Seltzer’s oeuvre of the damned to a slightly less soul-crushing but still fairly dire bit of spoofery: Get Smart, the groaningly mediocre 2008 big-screen adaptation of Mel Brooks and Buck Henry’s spy spoof. These two exercises in subpar parody lead to a much more inspired riff on blockbuster formula: Ben Stiller’s smart-ass Hollywood satire Tropic Thunder, featuring a charming young Canadian named Jay Baruchel in a small but memorable supporting role. A couple of years later, Baruchel co-starred and co-wrote the critically acclaimed sleeper Canadian comedy Goon, which Netflix recommends for fans of Tropic Thunder.

Baruchel seems to be having parallel careers in the United States and his home country of Canada. In the U.S., Baruchel is in tight with the Judd Apatow gang, and appears in—or lends his voice to—big blockbusters like How To Train Your Dragon, Knocked Up, Tropic Thunder, This Is The End, and the upcoming RoboCop remake. In Canada, however, the spirit of 1970s New Hollywood seemingly lives on. There, Baruchel commits himself to quirky, low-key, adventurous projects, including the profane, Slap Shot-inspired character study Goon, and the previous You Might Also Like? entry The Trotsky, which smartly cast Baruchel as an impassioned young Marxist who thinks he’s Trotsky’s second coming. Then there’s Real Time, the film Netflix recommended for Goon fans. It’s a grubby 2008 two-hander comedy-drama whose gimmick is right there in its title: It takes place in real time. 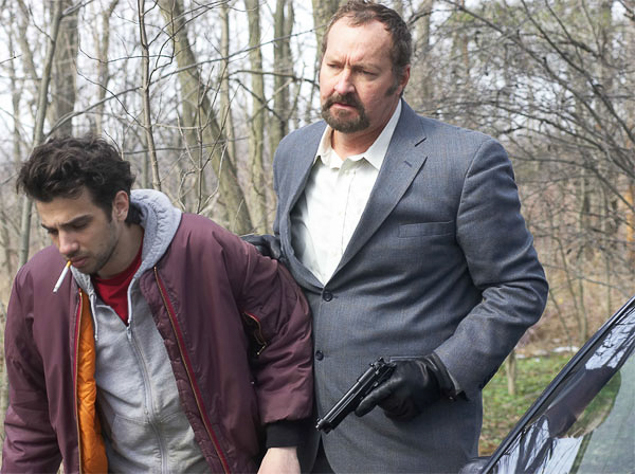 Real Time chronicles the strange relationship between Andy (Baruchel), a compulsive gambler who’s at least $68,000 in the hole, and Reuban (Randy Quaid), a beefy, quiet Australian hitman assigned to murder him. In the 1998 Mase single “24 Hours To Live,” the mealy-mouthed MC and some compatriots all confront the question, “If you had 24 hours to live, what would you do?” In Real Time, Andy confronts an even more dramatic, pressing question: Reuban only offers him one hour to redeem what has clearly been a wasted life, chockablock with compulsion, addiction, and failure.

Real Time opens in an unmistakably 1970s-style vein, with Andy smoking a cigarette and shuffling down an ugly, dirty street while profanity spills out of his mouth at such a rapid clip that he seems afflicted with at least a touch of Tourette’s syndrome. Andy utters the word “cocksucker” so insistently and with such frequency, it’s almost as if he’s trying to establish it as his catchphrase. He’s a Canuck Ratso Rizzo, marinating in the squalor of his rinky-dink existence.

Superstition is every gambling addict’s true religion, and Andy tries to live by a homemade code of symbols and omens understandable only to himself, and only intermittently. He’s a hard-luck hustler in the midst of a losing streak that seems to have started early in his adolescence and lasted at least until Reuban pulls up to him in a car with a stern expression that indicates a bleak personal reckoning is at hand.

Or at least it should be, but Reuban isn’t the average professional assassin. For starters, he isn’t keen on killing people. Secondly, he’s a hell of a sweetheart. You’d have to go back to Gigli to find a more kind-hearted career criminal, and to Crocodile Dundee to find such a nice Australian gentleman. In Hal Ashby’s wonderful 1973 drama The Last Detail, a pair of lifelong Navy men (Jack Nicholson and Otis Young) decide to show a young man (Randy Quaid) a good time before escorting him to a naval prison to serve an eight-year stint for petty theft. In Real Time, the dynamic is reversed, with Quaid offering the reprieve to a condemned man.

Real Time gets off to a promising start. Baruchel gives his character a panicked, self-pitying desperation that feels real. But any pretense of verisimilitude dissipates the moment Reuban tells Andy he’s definitely going to kill him, but he has 60 magical minutes to make peace with his destiny first. The first indication that Reuban is such a big-hearted samaritan comes when he thoughtfully brings Andy his beloved cat, to help make his final hour on earth a little less lonely.

From the beginning, Reuban seems less interested in ending Andy’s life than in enriching it. He seems suspiciously intent on imparting a movie’s worth of life lessons to a guy whose life is supposed to end before the day does. Early in the film, for example, he asks Andy to look around and describe the sad place where he has lived and gambled. Andy says he sees a shithole, so Reuban asks him to climb atop his car, like Robin Williams getting his students to stand on their desks in Dead Poets Society, to get a new perspective, if only physically, on a world that has lost its luster. True to form, Andy sarcastically quips that he now sees “a shithole from a slightly higher perspective.” It’s a funny line, expertly delivered, but Reuban is not easily discouraged.

It’s telling that Reuban isn’t angry with Andy, the way an enforcer would be with a degenerate gambler who owes his boss an insane amount of money—and who’s been adding insult to injury by bad-mouthing said boss all around town. Instead, he’s disappointed, the way a father would be with an extremely smart, talented, but self-destructive child. Reuban behaves so kindly and paternalistically towards the young man he’s supposed to murder that I began to suspect he was secretly Andy’s father—though if that were the case, he’d probably feel a little weird fulfilling Andy’s request to spend part of his final hour making sweet love to a prostitute whose calling card is her resemblance to Rosie Perez. 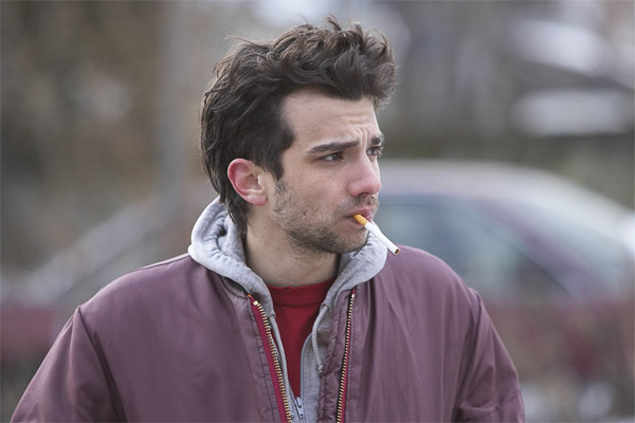 Andy’s last fling never materializes; instead, Reuban takes Andy on a tragical history tour through the wreckage of his life. They visit Andy’s old school. They stop by the home of Andy’s grandmother, who is puzzled by her unexpected visitors. They go to a fried-chicken restaurant that Andy may or may not have been fired from for sticking his penis in the macaroni salad. Andy periodically attempts to escape, but his efforts are invariably halfhearted, because Andy seems to understand that a hitman who gives his victims time to make peace with their deaths and then chauffeurs them around town is also probably too nice to actually kill them. And despite the clock ticking away in real time, Real Time is largely devoid of tension or suspense, because Andy’s life never seems to be in danger. When Reuban shoots Andy late in the film, it’s a shock because Reuban seems too nice to harm a fly, let alone wound another human being, especially one he’s so intent on teaching to value his squalid little life.

Reuban isn’t a killer. He’s a martyr, literally. When it comes time for him to stop dicking around giving heartfelt advice and actually murder somebody, Reuban literally dies for Andy’s sins by turning the gun on himself rather than killing his unwitting protégé. (First, though, he does allude to having a fatal tumor of some sort.) If that weren’t Christ-like enough, Andy then discovers that Reuban has left him a money order for $68,000, exactly enough to get him out of his bind and buy him a new life and a fresh start. This should register as a twist ending. Instead, it feels like the destination the film has been plodding toward all along, ever since Reuban gave Andy a final hour viewers implicitly know will actually stretch out into infinity, or at least as long as it will take for Andy to die a natural death.

Beyond the nervy magnetism of Baruchel’s ballsy, profane lead performance, Real Time has a sizable asset in its dispiritingly accurate view of the shittiness of small-town life in Canada. At its best, Real Time reminded me a little of Alexander Payne’s wonderful Nebraska in the way it depicts small-town life as so unrelentingly ugly, banal, and tacky that it comes back around to being strangely beautiful. But mainly, Real Time is a gimmicky movie where the gimmick simply doesn’t work, and the pretensions to realism are laughable. Baruchel deserves credit for choosing an offbeat project and going toe-to-toe throughout the entire film opposite a terrifying veteran like Quaid, who is both a great character actor and a famously insane human being. But Quaid’s presence and the film’s faint echoes of The Last Detail only underline how far the film falls short of its aspirations. It’s a New Hollywood-style exploration of life on the margins, and a reminder that the fabled filmmaking era of the late 1960s and early 1970s birthed plenty of non-starting movies as well. Real Time is definitely different, but different doesn’t necessarily mean good.