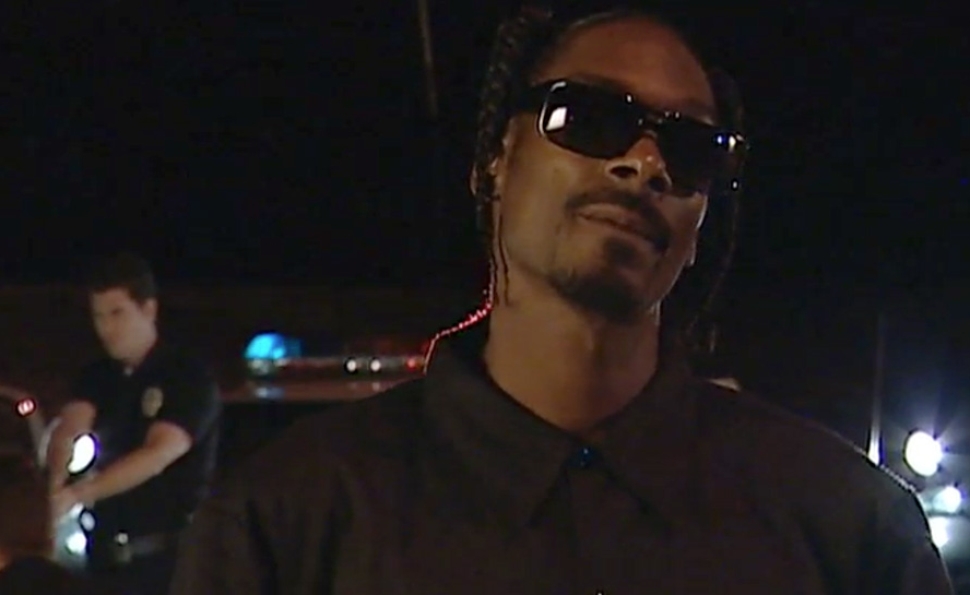 A recommendation trail leads to the curdled satire of The L.A. Riot Spectacular

We begin this entry with Machete Kills, a sequel to Robert Rodriguez’s grindhouse homage Machete that, at the very least, improves on a title that was universally criticized for being insufficiently violent. Netflix’s first Machete Kills-inspired recommendation is a lurid B-movie called Bad Ass—starring Machete Kills badass Danny Trejo and bullet-headed Roc star Charles S. Dutton—and from there, it recommends a little-seen comedy called The L.A. Riot Spectacular.

The L.A. Riot Spectacular’s packaging prominently features narrator Snoop Dogg holding in one hand a stolen television (we know it’s stolen, because Snoop has thoughtfully attached a “stolen” tag to it) displaying an image of Rodney King being viciously beaten by Los Angeles police officers. In his other hand: a newspaper called The Last Call (a twist on the Nation Of Islam newspaper The Final Call) with a headline screaming, “Ketchup, The White Conspiracy!” Meanwhile, a crudely photoshopped vision of Los Angeles burns in the background, the apparent victim not just of looting, but of an extinction-level event, or possibly an alien attack.

Whoever designed the DVD box is so enamored of the “Ketchup, The White Conspiracy” headline that it’s prominently featured on the back of the box as well, only this time, the newspaper is held by a repentant Daryl Gates, as played by distinguished veteran character actor Ronny Cox. The overcompensating back of the DVD box also contains the warning “This is not your parents’ PC Film!”, which is a self-congratulatory way of broadcasting that the filmmakers will be bold enough to make jokes about black people loving malt liquor, Jews being greedy lawyers, Asians being unable to pronounce “R” sounds, and other stereotypes sensitive souls might deem “lazy,” “racist,” “brutally unfunny,” and “a sad reminder of the ugly, narrow-minded thinking of bigots past.”

Like Machete, The L.A. Riot Spectacular delights in its own gleeful vulgarity and bad taste, and features a cast far more distinguished and impressive than it deserves. Both films are intent on force-feeding audiences outrageous comedy and profane wackiness with such ferocity that they’re liable to feel like they’re being waterboarded rather than entertained. Too much isn’t enough for Machete or The L.A. Riot Spectacular, but in the latter’s case, that didn’t hold true for audiences. The 2005 film’s ending teases an O.J.-themed sequel; eight years later, that film thankfully hasn’t come to pass. 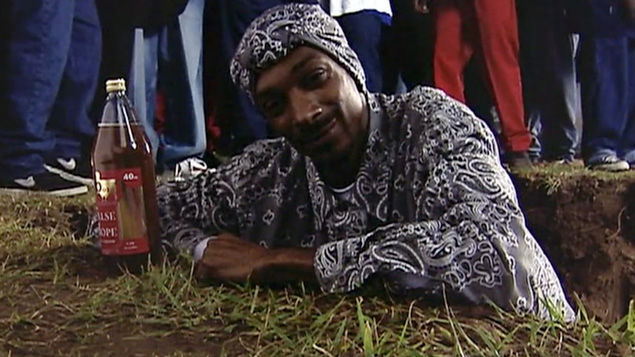 Before viewing The L.A. Riot Spectacular, I watched a behind-the-scenes featurette on its making, where the cast applauds themselves for their bravery in tackling such an audacious, important, sure-to-be popular project. Estevez claims the script for The L.A. Riot Spectacular is the most original he’s read since Repo Man, which reflects terribly on either Estevez’s judgment or the scripts he’s read. Though I did not laugh once during The L.A. Riot Spectacular, I can understand how someone like Estevez could have looked at the screenplay for the film and seen an audacious provocation that would make a pronounced cultural impact, rather than a regrettable exercise in bad taste that would barely get released in a handful of theaters in Los Angeles, then instantly forgotten.

The L.A. Riot Spectacular is audacious. It takes incredible chutzpah to make a ramshackle lowbrow comedy out of one of the late 20th century’s defining national tragedies, but not quite as much chutzpah as it would have taken to make a film called The L.A. Riot Spectacular centered on Snoop Dogg in 1994. That theoretical project would undoubtedly make headlines and attract attention, but in 2005, any element of timeliness was long gone. Scoring Snoop would have represented a hell of a coup back in 1994, but in the intervening years, the value of Snoop’s participation in any project nosedived due to the rapper’s apparent willingness to say yes to any gig, no matter how sleazy or mercenary. (In one of his many low points, he even got in bed with Joe Francis’ toxic Girls Gone Wild empire.)

Writer-director Marc Klasfeld shows his misplaced audacity from the start, with blurry, then-contemporary footage of jihadists preparing to chop off an infidel’s head. Then the film rewinds from 2005 backward through the toppling of the World Trade Center on 9/11, the Unabomber, David Koresh, and Saddam Hussein. The screen turns black and narrator Snoop Dogg mockingly asks, “Can’t we all just get along?” Cue the familiar thump of 2Pac and Dr. Dre’s “California Love,” accompanied by helicopter shots of the Los Angeles skyline circa 1991. Once it’s firmly situated in 1991, the film tips its hand with a series of one-liners delivered by unseen but sonorous voices representing media outlets that the film holds in the same withering contempt it holds everything and everyone.

The film takes a quantity-over-quality approach to comedy that quickly proves exhausting. There are few things in the world more tiresome than bad jokes (and I write that knowing I’m guilty of more than my share), and Riot opens with a deluge of gags that give a good indication of what audiences are in for. First up: a slick-talking radio DJ saying, “There is a 9-0 in our forecast. That’s right. 90 degrees… Hot as a motherfucker.” That’s the kind of juvenile joke that was endemic to skits on rap albums throughout the 1990s, like those made by Snoop Dogg. Nobody listened to gangsta-rap albums for the skits; they listened to gangsta rap despite the skits. But unfortunately, comedy is Riot’s sole attraction, and oh boy, is it in short supply.

That “gag” is followed by another in the same mold—“In the latest news, unemployment is at an all-time high in the city of Los Angeles. Mayor Bradley says if you’re out of work, you’re shit out of luck”—and then a bit of local comedy that would die at an open-mic in one of Los Angeles’ least discriminating comedy clubs: “In other news, carjacking turns deadly. But luckily, the man killed was only a struggling actor.” Carjacking! Struggling actors! That is so L.A.! The jokes get more abrasive and even less funny as they continue, ending with a newswoman saying, “In celebrity news, O.J. Simpson was arrested for beating his wife. That makes it the 53rd time the former football star has bitch-slapped his white ho.” The film has barely begun, and it already reeks of desperation.

The camera then zooms into the cop car of officers Powell (Estevez) and Koon (McDonald) as they approach the speeding car of Rodney King (Carter), a high-speed chase that takes the form of an automotive horse race, complete with a helicopter announcer doing the play-by-play as the officers compete for the honor of viciously beating an unarmed black man. Once he’s been caught, King appeals to the officers’ sense of compassion and humanity, and when that fails, he wearily concedes, “Let the beating commence, man.” Then he’s beaten to the tune of an ironically upbeat bluegrass ditty, before Snoop Dogg rolls up in a police car with hydraulics. Wearing a long-sleeve shirt with his name on the sleeves, Snoop addresses the camera directly, explaining, “Now, I know what you’re thinking. The L.A. Riot Spectacular? What is this, some sick joke? What’s next? The Columbine Jamboree? Or better yet, the 9-1-1 Extravaganza? No matter who was right or who was wrong, I’m here to tell you, the shit was fucked up. Remember. Snoop has eyes everywhere. I’m going to share with you a classic American tale.”

“The shit was fucked up.” That could double as the film’s confused mission statement. A great satire requires a point of view and an overarching philosophy, but the closest The L.A. Riot Spectacular comes to either is its strong contention that everyone is greedy, full of shit, and probably beyond redemption. The film is powered by sour rage that spills out in all directions: at violent gang-bangers destroying their own communities, at racist police officers, and above all, at media that shamelessly exploits human misery and racial and social unrest for profit.

In The L.A. Riot Spectacular, Koon and Powell become rock stars of the law-enforcement world, surrounded by screaming fans. George Holliday (Forsythe), the man who shot the video, snags a three-picture deal and directs a porn-star parody of the incident starring Ron Jeremy. And Rodney King and Reginald Denny are interviewed on the red carpet like preening starlets. As the title suggests, the film’s central gag is to treat the beating, the trial, and its aftermath as silly pop spectacles, ranging from the aforementioned horse race to an MMA match (the Reginald Denny beating) to a city-wide game of Family Feud hosted by Mayor Bradley and featuring representatives from all of the warring groups.

It’s an obvious gag that dies the first time around and never gets any funnier. The L.A. Riot Spectacular has two primary modes that prove equally unpalatable: juvenile scatology and vicious satire. Klasfeld seems equally interested in winning laughs and making points, and fails spectacularly at both. However, the film’s willingness, even eagerness, to go to dark places is both strangely admirable and jarring, as when Cox’s Daryl Gates chillingly tells Koon and Powell, “I remember when I beat my first nigger… the cold hard steel thrashing against his bones.”

The filmmakers barely even try to draw comedy from the ugliness of lines like that and “In culinary news, the roasted white skin of innocent bystanders is fast becoming a soul-food staple”—one of those wacky decontextualized news snippets that were clearly added in post-production, like far too many of the film’s gags. For a music-video director, Klasfeld is shockingly indifferent about matters of style, and as a first-time feature director, he makes the mistake of telling rather than showing.

Early in the film, for example, a Mexican man apparently meant to fill in for all the city’s Hispanics complains that even though Hispanics outnumber African-Americans three to one in Los Angeles, they’re invisible in the eyes of the media. Why dramatize this phenomenon when you can simply stick it in a character’s mouth? Later, the character takes dramatic action by putting on blackface so the media will finally pay attention to him, a joke that’s offensive partially because it involves a dude in blackface, but mostly because it’s so strident, pained, and desperately unfunny.

At best, The L.A. Riot Spectacular reminded me of two other trippy, transgressive satires of a world spinning madly out of control: Southland Tales and Uwe Boll’s Postal. But the film fatally lacks Southland Tales’ kaleidoscopic intensity and Postal’s vulgar energy. Klasfeld might have intended to make a live-action South Park, or a Dave Chappelle or Richard Pryor routine in cinematic form; instead, he made a gonzo, immersive social satire that left me nostalgic for Boll’s comparative wit. The L.A. Riot Spectacular is remarkable largely for its bitterness and ugliness, for its nihilistic take on the ugliest recesses of Los Angeles’ tortured past and its incoherent, contradictory politics. But the film’s rage isn’t righteous, so much as confused and abrasive. The time that passed between 1991 and 2005 robbed the film of its relevance without giving the filmmakers the gift of perspective; it’s a powerful rebuke to the popular notion that comedy equals tragedy plus time. In this case, the pain, anger, and confusion that characterized the era the film spoofs has remained, but no humor manages to escape the film’s ugly cynicism.