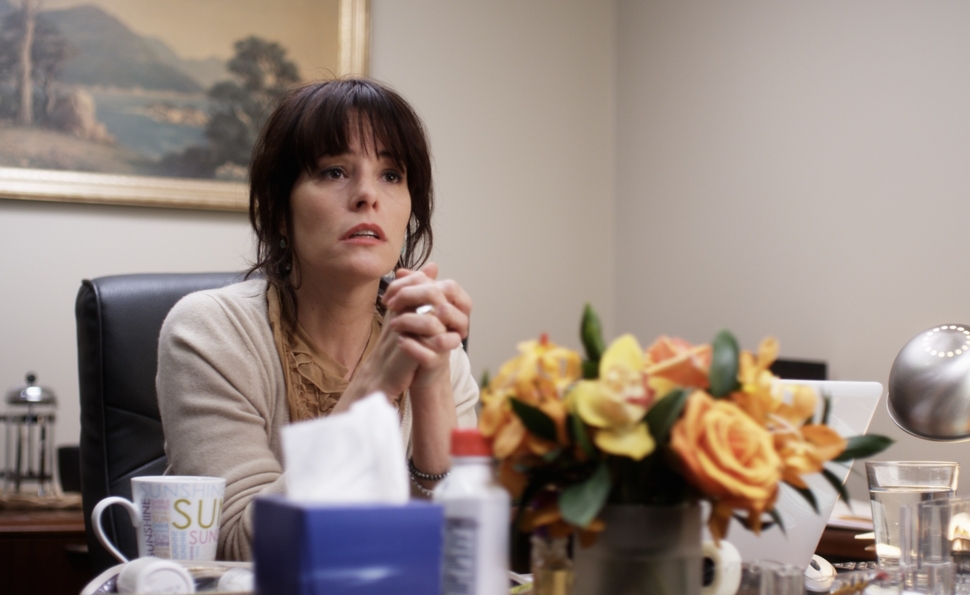 A strange recommendation for fans of The World’s End

In this entry of You Might Also Like, the starting point of The World’s End—Edgar Wright and Simon Pegg’s dazzling concluding entry in their “Cornetto Trilogy”—leads to an unexpected suggestion from the Netflix recommendation robot: Cashback, a 2006 British comedy about a bored grocery-store employee who acquires the ability to freeze time. The connection between The World’s End and Cashback isn’t entirely clear, but it could be that both films are about people who want to manipulate time: either by stopping it, in the case of Cashback’s protagonist, or by metaphorically turning back the clock, as Pegg’s drunken lost soul wants to do by roping his friends into reliving their adolescence through an epic pub-crawl reunion that takes an odd turn.

The connection between Cashback and the intriguing 2012 workplace indie Price Check is a little clearer: Both prominently involve grocery stores. Cashback’s protagonist works in a grocery store, while Price Check chronicles what happens when ambitious, hard-charging single businesswoman Susan (Parker Posey, in a tour de force performance) is dispatched to shake up the pricing and marketing division of a sleepy, failing supermarket chain. She instantly becomes fixated on Pete (Eric Mabius, best known as Dawn Wiener’s rocker crush in Welcome To The Dollhouse and as one of several thousand actors to have portrayed The Crow), a handsome husband and father with a glamorous past who’s seemingly biding his time in a go-nowhere position until retirement.

Susan’s arrival wreaks havoc on a delicate ecosystem that can barely handle such a profound shock to its system. It’s a professional purgatory where ambition of Susan’s level is viewed with profound suspicion. In a workplace ruled by the intertwined forces of inertia and apathy, Susan is a powerful catalyst. To Pete and his coworkers, their job is just a job, and certainly nothing to be proud of. But Susan’s job is her identity; it isn’t what she does, it’s who she is. Pete isn’t as committed. He isn’t particularly invested in his job, because that would mean conceding that he’s a junior executive in the exhilarating world of grocery-store pricing, not a cool music-industry player passing the time with a soul-crushing day job between sexy, exciting gigs. 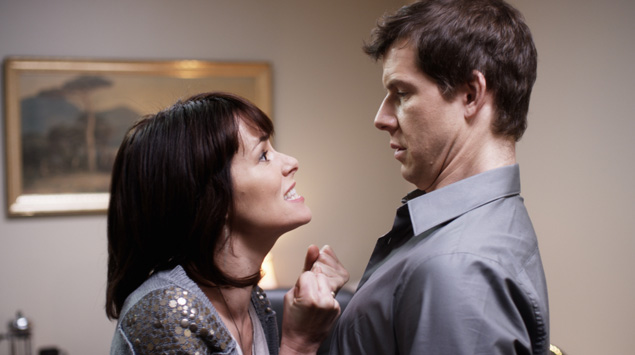 Susan sees something in Pete he doesn’t see in himself: unrealized potential. She’s a class- and status-conscious social climber who immediately locks onto the flashiest, most impressive elements of Pete’s life: his Dartmouth education, his past working in the music industry for labels like Sony and Matador, his attractive wife and adorable son, his love of the band Luna, and even the music on his iPod. Susan thinks Pete is special and cool, and flatters his sleepy ego by singling him out as her protégé, promoting him to vice president, and giving him a $40,000 raise.

Pete and Susan each see something in the other that they desperately want. In Susan, Pete sees the road not taken, someone who has eschewed the niceties of marriage and parenthood so she could focus on her career, while Pete represents to Susan the soulful satisfaction of a life devoted to family rather than work. Over the course of the film, they use each other to try to achieve what they think the other person possesses and they lack. Pete uses Susan as a step up the corporate ladder and a quick trip to upward social mobility and financial security, while Susan bluntly pursues her goals, including asking Pete to impregnate her via drunken, regrettable sex. Pete acquiesces as much out of a desire to hold on to his new power and wealth as out of any carnal longing, and their strange professional partnership of convenience takes on a dangerous personal and sexual quality. In a Star Is Born-like scenario, Susan’s stock drops and Pete’s rises when Susan’s boss Bennington (Edward Herrmann) takes a shine to the up-and-coming new executive.

Bennington’s fondness for Pete is motivated partly by a paternalistic form of sexism. In his interactions with Pete, the grandfatherly Bennington stresses his love of family and the joy being a father has brought him. He’s clearly more comfortable with a nice man in a nice suit, someone with a wife and child to go home to, than he is with a mercurial single woman like Susan. Herrmann embodies the smiling, friendly face of sexism—he isn’t a creepy sexual harasser, just a gentle family patriarch looking to lend a helping hand to an affable young man who appears to share his values and priorities, though he’s fucking his boss behind his wife’s back.

Price Check is refreshingly matter-of-fact about Susan’s voracious sexual appetite. When she hooks up with office horndog Doug (Josh Pais) at the company Halloween party while outfitted in a costume that could charitably be deemed “Slutty Pocahontas,” it doesn’t reflect well upon her as a boss or a human being, but it also isn’t depicted as damning proof of her loathsome character, either. For Susan, casual sex is just that: casual, and not anything to get worked up about. She’s lonely, out of place, and desperate to make a connection wherever she can, whether that means glomming onto Pete and his family in ways that would seem obsessive and a little invasive even if she didn’t have sexual feelings for the family patriarch, or having sex with a co-worker (or two) against her better judgment.

When your life and career revolve around watching movies, you begin to see patterns and connections everywhere. It was instructive, for example, for me to watch Price Check a week after watching Disclosure for Forgotbusters, since they both revolve around a childless, ruthlessly ambitious, sexually aggressive businesswoman who makes a habit of sleeping with male underlings, and comes on to the film’s family-man protagonist. In the Michael Crichton novel that inspired Disclosure, this aggressive businesswoman is a figure of pure evil, a man-hungry demon-woman in a Wonderbra who isn’t content until she’s destroyed the protagonist’s happy little domestic utopia. In Price Check, however, she cuts a much more sympathetic, complicated figure, even though Susan has few redeeming facets. In that respect, Price Check represents a clear step forward from Disclosure, treating a similarly divisive figure with a level of empathy and understanding wholly lacking from Crichton’s bestselling page-turner or the surprisingly palatable film version.

This is largely attributable to Posey’s remarkable performance. The hairline fractures in Susan’s carefully cultivated façade of supreme confidence are apparent from the beginning, even when she’s at her most assured and confident, and grow more pronounced as she begins to lose her slippery foothold on the corporate ladder. To its credit, Price Check doesn’t judge Susan any more than it does Pete. Both characters are tremendously flawed, though Pete at least puts on such a respectable front that he’s continually praised for his honesty, even as he spends much of the film living and perpetuating a lie. Sure, Susan ultimately betrays her underling and seduces a married man, but is that really any worse than carrying on an extramarital affair largely, if not exclusively, for the sake of personal and professional advancement?

That lack of judgment and refreshing moral ambiguity extends to Pete’s wife Sara (Annie Parisse), who figures out fairly early on that her husband is having an affair with his high-strung, attractive boss, but makes a pragmatic decision not to confront him. As a pregnant, unemployed mother with a small child and mounting credit-card debt, she can’t afford to leave her husband. She makes her own Faustian bargain with the universe because she understands that overlooking a transgression by her fundamentally good husband could mean the difference between enjoying a high quality of life as the wife of a successful executive, and struggling to make ends meet as a harried, overwhelmed single mother. Like the other characters in the film, she does what she must to get by, though that means accepting painful compromises.

In its superior first two acts, Price Check strikes a nice balance between low-key workplace comedy and personal, professional, sexual, and romantic drama. The character study grows less assured and convincing with the introduction of melodramatic contrivances in the third act that cast further doubt on Pete’s character and integrity. Where The World’s End grows in depth and meaning with a shift that dramatically broadens the film’s scope and shifts genres, Price Check is too modest and fragile to handle such a shift in tone, though the film’s late stumbles don’t negate its considerable strengths. It’s an agreeably life-sized character study about the cost of ambition, though it makes the regrettable mistake of trying to be something more.

Will fans of The World’s End also like Price Check? It’s hard to say, but hopefully folks who dug Wright and Pegg’s incisive exploration of the costs of suspended adolescence will at least be open to exploring the complicated psyche and rich internal life of a supremely complicated woman—especially when brilliantly embodied by an actor of Posey’s caliber.