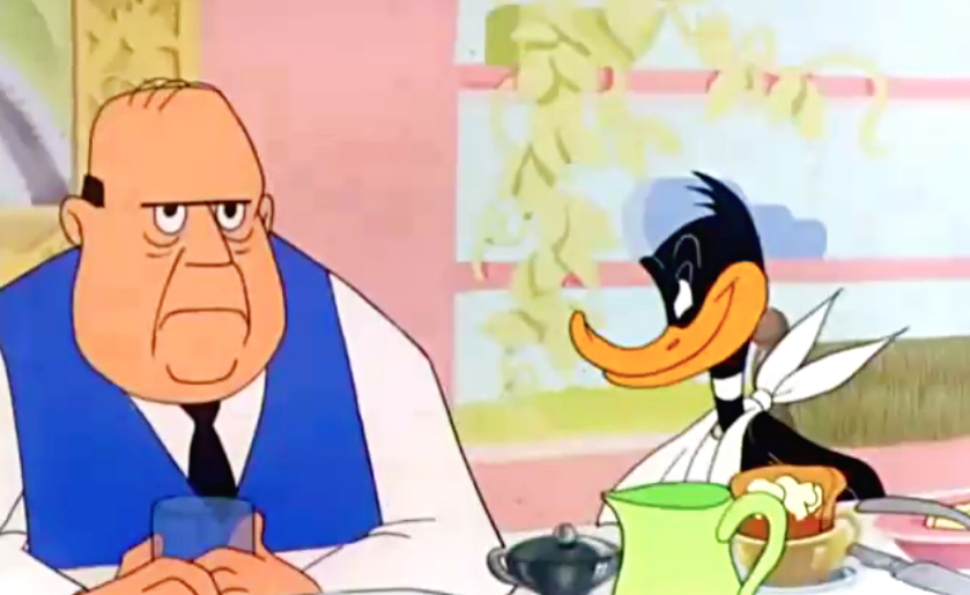 The animated roots of Frank Tashlin

—Chuck Jones, from Chuck Amuck: The Life And Times Of An Animated Cartoonist

It’s inaccurate to say that Frank Tashlin’s animation career was a footnote to his work as a feature director, because over the past several decades, scarcely an article has been written about Tashlin without a mention of how he got his start in Hollywood. His stints at Warner Bros. in the 1930s and 1940s are usually presented as an ipso facto. Why are Tashlin’s movies so packed with visual gags? Because he used to work at “Termite Terrace,” directing Looney Tunes and Merrie Melodies shorts.

But while Tashlin’s background in cartoons is something even most casual cinephiles know, those same cinephiles typically have trouble naming some of those cartoons. That’s not because Tashlin’s Looney Tunes shorts were sub-par. They’re actually hilarious, and frequently strongly creative. But in the packages of Warner Bros. shorts that have played over and over on television since the 1960s, only one or two of Tashlin’s films have become staples. Even his best-known Warner Bros. work, 1944’s “Swooner Crooner”—the only Tashlin toon to get an Oscar nomination—wasn’t in heavy rotation like the best of Chuck Jones, Friz Freleng, Robert McKimson, Bob Clampett, and Tex Avery. In Warner Bros.’ recent “Platinum Collection” series of Looney Tunes Blu-rays, two whole volumes and more than 100 cartoons passed before Tashlin’s work on the series received any kind of spotlight.

The third Platinum Collection rights that wrong a little, collecting seven Tashlin shorts and adding the 10-minute featurette “Tish Tash: The Animated World Of Frank Tashlin”—a brief but informative introduction to the part of his life that’s often cited, rarely studied. Filmmakers and critics like Joe Dante, John Kricfalusi, Jerry Beck, and Leonard Maltin break down what Tashlin did with his cartoons that distinguished him from the more popular Jones and Avery. They cite the rapidity of his gags, the elegance of his character designs, and a eye for framing that had more in common with live-action. Even when he was drawing Porky Pig and Daffy Duck, Tashlin was already itching to work with flesh-and-blood actors on real movie sets. Dante marvels at how brazen Tashlin was about it, describing how in a simple cat-vs.-bird cartoon like 1943’s “Puss ’n’ Booty,” the director was using lighting effects and forced camera angles to heighten the suspense, like a  pen-and-ink Alfred Hitchcock.

Tashlin never made any secret of his ambitions. In an interview with animation historian Michael Barrier, Tashlin said:

“When I was doing cartoons, I was concerned with one thing: Doing motion pictures, features… I remember I did the first montage they ever did in a cartoon. I was always trying to do feature-type direction with these little animals. And it’s like when I was doing films, I started thinking of doing plays.”

In addition to feature films and plays, Tashlin also wrote how-to manuals and picture-books—including the 1946 illustrated satire The Bear That Wasn’t, which Tashlin’s former colleague Chuck Jones turned into an acclaimed animated short for MGM in 1967. (Tashlin chose not to consult on the film, and was so disappointed with the result that he never spoke with Jones again. Jones then left Tashlin out of his memoir Chuck Amuck, which may have been a sign of lingering bad blood.) Tashlin told Barrier, “I’m never where I’m at.” Even when he was an animator, he bounced from studio to studio, searching for new opportunities that he could use as stepping-stones to something else.

Pre-Warner Brothers, Tashlin worked for Terrytoons and the Van Beuren Studio, producing shorts that were largely unremarkable, like 1933’s “Hook & Ladder Hokum,” starring Van Beuren’s silent-movie-inspired comedy team Tom & Jerry (not the MGM one, but a bandy-legged human duo) as bumbling firemen. Like a lot of the animation of the era, those Tom & Jerry cartoons thrive on repetition and visual absurdity, and only occasionally show flashes of Tashlin’s wilder sense of humor.

For two separate stretches in the 1930s, Tashlin worked for producer Leon Schlesinger on the Looney Tunes and Merrie Melodies series. Schlesinger and Tashlin clashed frequently, but Schlesinger appreciated that Tashlin worked quickly, and the team that was coalescing at Warner Bros. at the time—Avery and Clampett in particular—inspired each other to pepper their shorts liberally with gags, creating a new mode of animation. Beck, Maltin, and other cine-historians credit Tashlin for cranking up the pace of the Looney Tunes to jet-speed even before Avery did, though Tashlin shrugged off any credit for that. “If there was any innovation, it was Tex,” he told Barrier. Still, by the end of the 1930s, the films credited to “Frank Tash” were developing their own look and feel, mixing shamelessly dopey puns with a more modern line—compared to a New Yorker cartoon by John Kricfalusi, and to art deco by Beck.

Tashlin then took a pay cut to work at Walt Disney Studios (and to get away from Schlesinger), where he largely stayed behind the scenes, specializing in gags and stories. After the animator’s strike against Disney in 1941, Tashlin spent a couple of years at Columbia, heading up a Screen Gems unit that experimented with different styles, characters, and one-off ideas. His most lasting Columbia creation was the duo The Fox & The Crow, introduced in the elaborately violent 1941 short “The Fox And The Grapes”—cited by many as a nascent version of Chuck Jones’ Wile E. Coyote and Roadrunner. With Screen Gems, Tashlin continued to take simple story ideas and spin them into a barrage of weird jokes and winks at the audience, while his art became even more refined.

Warner Bros. brought Tashlin back in 1943, just in time for him to help the war effort by helming a handful of the five-minute “Private Snafu” instructional films that Schlesinger’s crew made for the U.S. Army. Intended to drive home the importance of hard work, efficient habits, good morale, and circumspection, the Snafu shorts also gave their animators an opportunity to be a little risqué, given that their audience was exclusively adult males. Tashlin’s contributions worked in scantily clad dancing girls, topless models, and a cute visual gag in 1943’s “The Goldbrick,” where the sleeping private keeps blowing up a pin-up’s skirt.

But it was in his last few years of Looney Tunes and Merrie Melodies that Tashlin made his real mark at Warner Bros. In the 1930s, he’d been stuck making Porky Pig cartoons, which he’d always felt was a bad match to his sensibility. In the 1940s, he got to play with Daffy Duck, and developed a take on the character that was different from directors like Jones. In shorts like 1943’s “Porky Pig’s Feat” and 1945’s “Nasty Quacks,” Tashlin makes Daffy into the ultimate obnoxious houseguest, willing to break the law and flummox stone-faced authority figures so he can keep on freeloading.

Visually and structurally, the latter-day Tashlin cartoons are astonishingly original. (This may be why they haven’t been on TV as much—because at times they almost seem off-model for Warner Bros.) As Maltin notes in “Tish Tash,” the director thought about camera moves and editing more than any of his Termite Terrace peers, using unexpected pans and quick cuts to enhance a gag. He also developed theories of animation design he called “SCOT Art,” which reduced the basic shape of characters to squares, circles, ovals, and triangles. Years before UPA revolutionized the look of animated films, Tashlin was making movies like “Swooner Crooner,” where he parodied Frank Sinatra by turning him into a rail-thin rooster.

Before transitioning fully into live action, Tashlin made one last animated short: the stop-motion political tract “The Way Of Peace,” produced by the Lutheran church as a warning against the dangers of the atomic bomb. With noted pacifist actor Lew Ayres providing the narration, “The Way Of Peace” offers a short history of human atrocity, from crucifixion to Nazi death camps to racist lynchings, before suggesting Christian brotherhood as a solution. The film bears some similarities to Tashlin’s more socially conscious children’s books, but otherwise suggests a serious side that either he chose not to explore in features, or that Hollywood didn’t give him the chance to pursue further. Stylistically, “The Way Of Peace” is in keeping with Tashlin’s other work in that it’s fast. Before one shocking image has had a chance to sink in, it’s been replaced by another.

Tashlin’s origins in animation haunted him a bit when he finally made the jump to live action at the end of the 1940s. He told Barrier that the first time he wrote for Bob Hope, someone told the comedian where Tashlin had come from, and Hope grumbled, “Jesus Christ, now I’m a rabbit.” Also, too often, even the critics who loved Tashlin were too reductive in their approach to his work:

“All the reviewers—Truffaut, and Godard, and all these people, when they were reviewers on Cahiers Du Cinema, they always treated my films, my Jerry Lewis films and all, as a cartoon. I did a picture with Tom Ewell and Jayne Mansfield, and as far as they were concerned, that was a Tom and Jerry cartoon, and the fact that his name was Tom, and hers was Jerry—which I never thought of—they said, ‘She is the cat, and he is the mouse.’ And they wrote, you know, all this philosophical double-talk.”

But at the same time, in “Tish Tash,” Tashlin’s son Chris insists that his dad spent “the happiest part of his life doing cartoons,” because back then it was all “new and fresh and creative.” Though the overall wackiness of Tashlin’s cartoons was mostly just an attempt to keep up with Tex Avery, veteran animators and scholars are still impressed by how willing he was to accelerate the action by reducing some shots to four or five frames. Eric Goldberg, the director of animation for Looney Tunes: Back In Action, talks in “Tish Tash” about “the clarity of his poses,” which is a good way to think about Tashlin both as a visual stylist and a Hollywood go-getter. Give him even one second of screen-time, and he’d try to fill it with something funny.

This concludes our Movie Of The Week look at Frank Tashlin’s Martin & Lewis comedy Artists And Models. Don’t miss Nathan’s Keynote on the film’s anarchic humor, and Scott and Tasha dueling in the Forum over Jerry Lewis’ humina-humina humor and the film’s stronger points. Next week, our monthlong overview of buddy comedies by the decades jumps into the 1960s with Jack Lemmon and Walter Matthau in The Odd Couple.