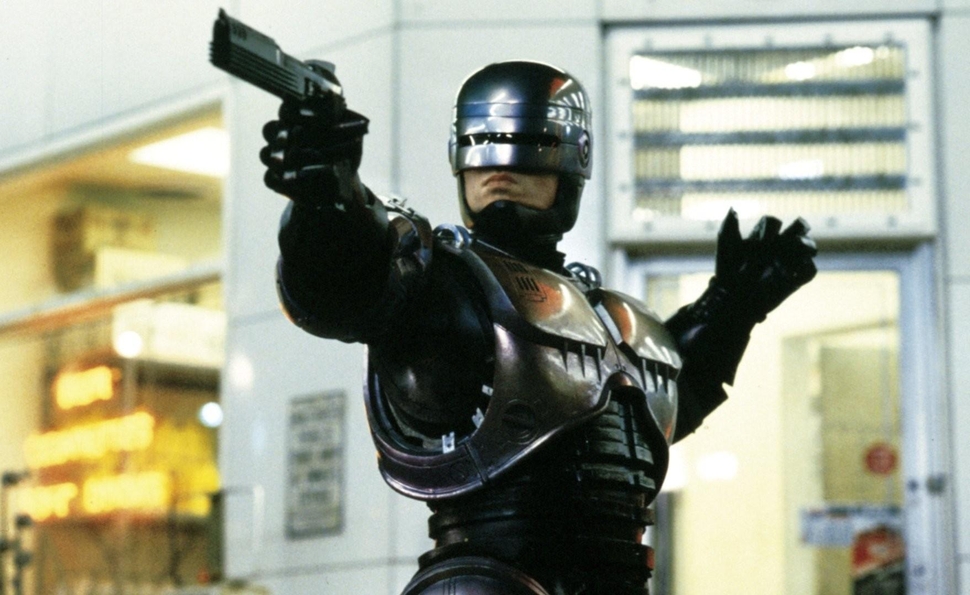 After a successful 2011 Kickstarter raised $67,436 for the project, a 10-foot-tall bronze statue of RoboCop has been built and is currently set for unveiling in Detroit, the then-and-now-beleaguered city in which Paul Verhoeven’s 1987 movie is set. The bronzed RoboCop has been likened to the Rocky statue and “Rocky Steps” outside the Philadelphia Museum Of Art, but the analogy isn’t quite so clean, since Mr. Balboa stands as the tough, scrappy, underdog spirit of his native city, while RoboCop is a product of corruption, forged to clean up a city blighted by unemployment, lawlessness, and despair. For Detroit, he’s a complicated hero, to say the least: Cities tend not to erect symbols of their own malaise, and in the film, RoboCop’s corporate sponsors make sure he protects and serves them above all. Add to that the Kickstarting ironists from out of town who no doubt fueled the fundraising effort—and the niggling fact that Dallas largely played the part of Detroit in the film—and the RoboCop statue has a few blemishes before the great unveiling.

And yet, the Robocop statue absolutely belongs in Detroit, both because it does embody the city’s industrial industriousness, and because the humanity of Peter Weller’s half-man/half-machine hybrid keeps asserting itself. In that sense, he’s very much like Rocky, only his toughest fights come from within, not from some clanking hunk of military metal like ED-209. The fact that the statue is a public initiative—rather than a tourist attraction dreamed up by the government, a corporation, or some collaboration between the two—squares perfectly with the film’s strong political agenda, which is about the wresting of power away from the city’s nefarious overseers. RoboCop is a wish for the kind of democratic triumph the statue represents—it isn’t often that people can have a monument to their own conflicted feelings about a city. It’s right for Detroit.

The dualities of RoboCop are also reflected in the movie itself, a sleek hybrid of genres, creators, motives, and influences: hyper-violent 1980s action and dystopian science fiction, two American writers and a Dutch director, commercial savvy and artistic ambition, real-world blight and comic-book cartoonishness. Like RoboCop himself, the film is a complex organism that’s made to seem stark and simple, and it makes other Hollywood action movies look like ED-209—big, lumbering machines that look fearsome, but sputter, pop, and break down with alarming frequency. And while Verhoeven deserves credit for his masterful orchestration, RoboCop is one of those rare times when the system works and many collaborators make distinct contributions: Ed Neumeier and Michael Miner’s multi-layered script; the graphic pop of Jost Vacano’s cinematography; Rob Bottin’s makeup effects, which seamlessly integrate metal and flesh; the rickety stop-motion charm of Peter Ronzani and Phil Tippett’s ED-209; a robust theme by composer Basil Poledouris; and a trio of bad guys in Miguel Ferrer, Ronny Cox, and Kurtwood Smith, who seem locked in a contest for extravagant venality. (Ferrer might ultimately have the edge, but it’s close.)

And then there’s Weller as Alex Murphy, a police officer newly installed in a Detroit precinct so overrun with crime that it can’t replace the dead cops fast enough. In fact, when Murphy enters the locker room on the first day, he witnesses another locker-nameplate being tucked into a cardboard box, accompanied by the groans of fellow officers who are laid low by another fallen comrade, but have accepted it as routine. Despite talk of a police strike, Murphy quietly resolves to put his head down and get to work, but he and his new partner Anne Lewis (Nancy Allen) have barely made introductions before they’re roped into a gunfight with crime kingpin Clarence Boddicker (Smith) and his sneering henchmen. Without backup from the overmatched police department, Murphy and Lewis are outmanned and outgunned by Clarence and his men, who brutally torture and kill Murphy.

Murphy’s rebirth as RoboCop adds several new layers of intrigue that deepen the film substantially. Spearheaded by Ferrer’s Bob Morton, an up-and-comer at a mega-corporation dubbed Omni Consumer Products, the RoboCop initiative brings the city’s police department under the OCP umbrella, but there’s an agenda beyond merely cleaning up the streets. OCP has its fingers in a lot of pies—if it were made today, people would think it’s obviously referencing a specific company like Halliburton—and obliterating “old” Detroit to make room for its own gentrified city is one part of the agenda. Supplying the military with weapons is another. And along with “Serve the public trust,” “Protect the innocent,” and “Uphold the law,” there’s a fourth, classified Prime Directive to ensure that OCP’s extracurricular activities are protected from its by-the-book super-cop. 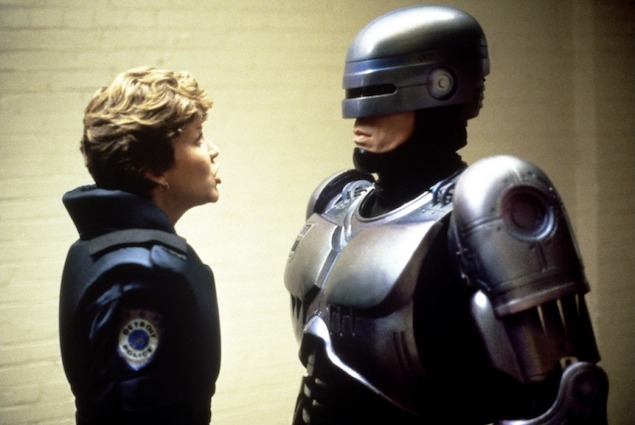 Part of the film’s conceptual cleverness is that RoboCop is every bit as good as advertised: He’s procedurally sound, an accurate shot, invulnerable to gunfire, and capable of logging long hours on little more than a diet of organic paste. (“Tastes like baby food.”) But that doesn’t undermine the film’s points about corporate overreach, gentrification, and the privatization of public services. And much of that is owed to the audience’s understanding that Murphy is always present, first in small ways, like the cowboy gun-spinning trick he learned to impress his son, and later as memories of his past start to short out his system. In RoboCop, the struggle between man and machine becomes a recognizable fight between humanity and outside forces encroaching on our identities. And that war has only intensified in the 25-plus years that have passed since RoboCop, now that technology and automation have become so integrated into everyday life that 2013 could give us another plausible near-future science-fiction story about a man’s romantic relationship with an operating system.

All of which brings us back to Detroit, the once-thriving/now-bankrupt city that has only continued to crumble since the original RoboCop correctly prophesied no end to its decline. The fortunes of the American auto industry have waxed and waned, but Detroit will never be the thriving commercial hub it was in its heyday, and the film never misses the opportunity to stage setpieces in decrepit factories that are either unoccupied or have had their legitimate businesses replaced by criminal enterprises. Given the debased culture Verhoeven and his screenwriters satirize so ruthlessly—from the smiling goons on local TV newscasts to a pre-Hummer gas-guzzler called the SUX 6000 to a bawdy sitcom built around the catchphrase “I’d buy that for a dollar”—it’s almost surprising that no one ever blames RoboCop for kicking a city while it’s down. The cops themselves may be salt-of-the-earth, but the Detroit they’re protecting is an urban war zone, vacant but for the skirmishes between parties eager to exploit what’s left of it.

But the fact is, no one talks about RoboCop as being anti-Detroit because its hero embodies the conflict between its industrial and human sides, which persisted even when all the factories were open. RoboCop stands as an arrow-straight protector of the city—“Madame, you have suffered an emotional shock. I will notify a rape crisis center”—but his ability to uphold the law wouldn’t make him endearing entirely on its own. In fact, if ED-209 functioned perfectly, citizens would probably still hate it. With Murphy’s heart beating behind him, RoboCop’s journey has him beginning life as an Omni Consumer Product, and then, Pinocchio-like, becoming a real boy, distinct from his creators, who have more sinister intentions than Geppetto. In the end, he belongs to the people. And the people deserve their statue.

Tomorrow, our Movie Of The Week Forum discusses Verhoeven’s unique style and his film’s use of dark comedy and violence. Then on Thursday, Scott Tobias talks to the film’s writer, Ed Neumeier, about the origins and prescient themes of RoboCop.