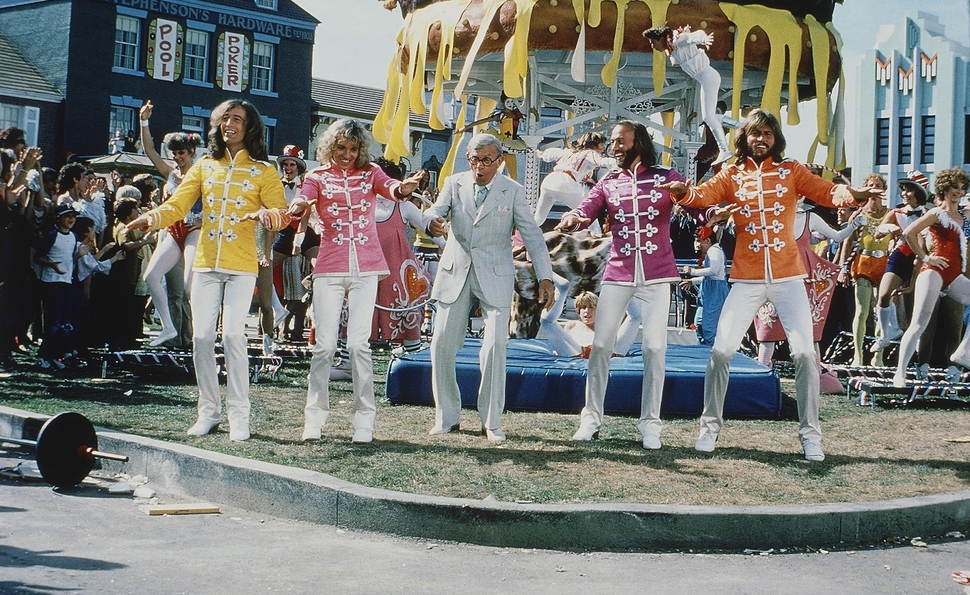 The post-Beatles Beatles movies reflect a decade of confusion

When Paul McCartney and Ringo Starr appeared onstage together at the Grammys this year, the crowd went wild, because even though McCartney and Starr aren’t as spry or cute as they were 50 years ago at the height of Beatlemania, they’re still Beatles. And if music lovers have learned anything over the last half-century, it’s to not take The Beatles for granted.

There wasn’t much precedent for The Beatles’ 1970 breakup. Previously, lesser rock bands had dissolved, and plenty of popular musicians had died. But until John Lennon’s 1980 murder, all four Beatles were alive, and reportedly still fairly congenial with each other. They were all still making music, and sometimes even appearing on each other’s records, but they refused to play live together in public as a foursome, or to make another Beatles album. The Beatles remained wildly popular, and in the abstract they still existed, inasmuch as the four of them could’ve stepped onto a stage at any time and been “The Beatles.” But they preferred not to. So popular culture rolled on, with artists and showbiz executives alike looking for ways to make use of The Beatles, either through homages or cash-ins.

The motion picture Beatlemania, released in 1981, sat at the middle of art and exploitation. Though it came out after Lennon’s death, the project started as a stage show in 1977, as an early version of what came to be known as the “jukebox musical.” Four musicians, dressed and styled to look uncannily like Lennon, McCartney, Starr, and George Harrison, would play some of The Beatles’ biggest hits in roughly chronological order, surrounded by film clips and stage dressing signifying the turbulent social change of the 1960s. The movie version is pretty bonkers. Rather than a direct document of the stage show, the Beatlemania movie runs recordings of the songs under what looks like home-movie footage of the show, intercut and overlaid with old newsreels and an LCD ticker of era-specific headlines. The image choice seems random: The opening credits include drawings of Marvel superheroes, and later, while the band sings “Help!”, they’re juxtaposed with wacky-looking clips from the early 20th century. The movie files The Beatles under “nostalgia,” then crams anything else that fits that tag into the same folder.

And Beatlemania isn’t even the weirdest post-Beatles Beatles movie. That honor goes to 1976’s All This And World War II, which consists entirely of WWII-era newsreels and movies, cut together to an all-new soundtrack of orchestrated Beatles covers. The concept of All This And World War II isn’t unusual for the time: Avant-garde filmmakers, documentarians, and cine-essayists had made a habit of repurposing existing footage into impressionistic collages. (For example: Emile de Antonio’s Millhouse: A White Comedy, or later on, the cult hit The Atomic Cafe.) And the generation of British rock musicians that The Beatles belonged to—including the members of The Who and Pink Floyd—occasionally let memories of WWII dominate songs and even whole albums. No, what’s especially odd about All This And World War II is the eclectic mix of acts performing the music. Alongside The Beatles’ semi-peers like Elton John and Rod Stewart, the soundtrack includes singers as disparate as Leo Sayer, Frankie Valli, and Helen Reddy. Also in the lineup: The Bee Gees, whose credible versions of “Sun King,” “She Came In Through The Bathroom Window,” and “Golden Slumbers/Carry That Weight” had a lot to do with their involvement in the biggest Beatles-related project of the 1970s.

The 1978 movie musical Sgt. Pepper’s Lonely Hearts Club Band is the definition of a “package.” Producer Robert Stigwood—also The Bee Gees’ manager/promoter—was coming off four consecutive hits in Jesus Christ Superstar, Tommy, Saturday Night Fever, and Grease. The movie’s stars, The Bee Gees and Peter Frampton, had recently set new sales records with the Saturday Night Fever soundtrack and the album Frampton Comes Alive! The film features cameo appearances by Steve Martin, Aerosmith, and Alice Cooper, and narration by George Burns, who was in the middle of a late-career revival thanks to his hit comedies The Sunshine Boys and Oh, God! If something was popular in the 1970s, Stigwood found a way to shoehorn it into the Sgt. Pepper’s movie, all while his crew worked to tell a simplistic, allegorical story about a band from “Heartland” sent out into a cruel world to spread a message of love.

Say this for Sgt. Pepper’s Lonely Hearts Club Band: Compared to the amateurish, montage-heavy All This And World War II and Beatlemania, it’s practically A Hard Day’s Night. Director Michael Schultz—who also helmed Car Wash and the underrated Cooley High—knows how to move a camera and stage a scene, and the overall brightness and hugeness of Sgt. Pepper’s has some inherent appeal. But the musical performances are as flaccid as most of the ones on All This (even though original Beatles producer George Martin helped record the soundtrack), and the songs run under dialogue-free sequences that traffic in the oldest clichés about how Hollywood sucks the soul out of talented, hopeful young artists. The movie is essentially a two-hour music video with cruddy music, and there’s no small amount of cynicism in a mega-budget, star-studded film pretending that money-grubbing showbiz types are villains.

Like All This And World War II before it and Beatlemania after it, Sgt. Pepper’s failed to set the box office afire. All three movies were also savaged by rock critics, who saw them as a soulless rip-offs, not as heartfelt attempts to keep the spirit of The Beatles alive for a generation that had never experienced them in person. The 1979 biopic Birth Of The Beatles got a fairer shake. Produced by Dick Clark Productions and directed by Richard Marquand (who a few years later was George Lucas’ designated figurehead on Return Of The Jedi), Birth Of The Beatles was released theatrically in Europe and aired as a TV movie in the United States, where it actually did give kids born after 1970 a sense of what made The Beatles such a sensation. While telling the story of the band’s early success in Hamburg and Liverpool, Birth Of The Beatles also presents the lads as likable quipsters with a strong bond, fierce ambition, and punky energy.

Birth Of The Beatles is corny, make no mistake. The script sneaks in quotes from Beatles movies and songs that didn’t exist yet in the era the film represents. (“It can’t get no worse,” John says at one point while considering the band’s prospects.) And the movie presumes that there was no line separating “The Beatles” of A Hard Day’s Night and the actual John, Paul, and George. (Ringo doesn’t join until the end of Birth.) But that’s part of Birth Of The Beatles’ charm. Unlike later, moodier Beatles origin stories like Backbeat, Nowhere Boy, and The Hours And Times, this version of how the band came to be is as cheery and cheeky as the early Beatles hits, filled with scenes of the boys shouting about how they’re going “to the top… to the very top,” and scenes like the one where Stephen MacKenna’s John Lennon takes one look at Ringo’s face and says, “It’s a great nose. Your little head quivers with the responsibility of it.”

What’s most notable about Birth Of The Beatles is that it takes for granted the audience’s interest in the band’s beginnings. Because The Beatles were so popular—yet so relatively short-lived—fans memorized the stages of their career as though they were the stations of the cross. Hamburg. The Cavern Club. Ed Sullivan. The post-pot albums. Sgt. Pepper’s. Psychedelia. The guru years. The break-up. The cycle was so well known that Monty Python member (and George Harrison buddy) Eric Idle could parody it in the 1978 mockumentary TV special The Rutles: All You Need Is Cash without worrying that people would miss the joke.

That confidence in a shared cultural history also informs Robert Zemeckis’ 1978 feature directorial debut, I Wanna Hold Your Hand, co-written with his longtime collaborator Bob Gale. Set in 1964, the film follows four young women from Jersey as they catch a ride to New York to watch The Beatles perform on The Ed Sullivan Show. I Wanna Hold Your Hand is less about the band than it is about one moment in time. It sets the action against the backdrop of Beatlemania, but it’s just as much about young people trying to forge new identities during an era of great flux. These are the last days of the fannish rock magazines, and the early days of people taking pop music seriously. (One of the ladies on the trip is a folk-music aficionado carrying a banner that reads, “Beatles Undermine Artistic Integrity.”) Zemeckis and Gale respect the vibe of the time, not making fun of the hysteria, but regarding it with a mix of nostalgia and awe. The result? Easily the best Beatles movie without a single Beatle.

Lennon’s death changed Beatles fandom and Beatles tribute movies, if only because his loss killed some of the hopeful, even defiant quality present in something as factory-made as Sgt. Pepper’s. If John, Paul, George, and Ringo weren’t going to be The Beatles anymore, then these films were willing to fill the void, and maybe remind the band of what they meant to people. Nearly all the movies failed to become blockbusters, but that isn’t necessarily a signal of poor quality, at least not where Birth Of The Beatles and I Wanna Hold Your Hand are concerned. It was just that audiences knew—subconsciously, if nothing else—that the actual Beatles were still out there, scattered to the winds. Why should they settle for, in Beatlemania’s words, “an incredible simulation?”

Our Movie Of The Week discussion of A Hard Day’s Night ends here. Don’t miss Tuesday’s Keynote on the film’s enthusiastic skepticism toward stardom, and Wednesday’s Forum on its style, music, and more. Next week, we give Americans a product they can love with a weeklong discussion of the original RoboCop.