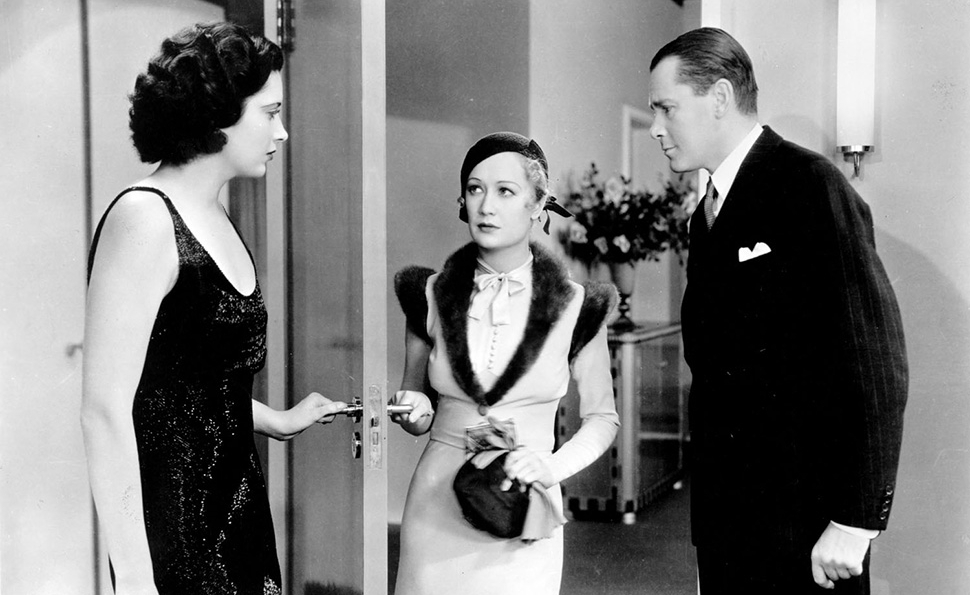 “I love you. I loved you the minute I saw you. I’m mad about you, my little shoplifter. My sweet little pickpocket. My darling…” —Trouble In Paradise

Director Sam Fuller once said this of his great 1953 crime movie Pickup On South Street, starring Richard Widmark as a charismatic thief: “To me, a pickpocket is no real criminal. He’s an artist.” Ernst Lubitsch’s Trouble In Paradise, produced more than 20 years earlier, implicitly agrees—and pulls off the neat trick of getting the audience to agree, too. Stealing is just the first of many sins that give Trouble In Paradise its illicit charge, but the film’s attitude about stealing may be its biggest turn-on: When people this sexy and talented lift billfolds and pocket watches, or even several hundred thousand francs out of a wall safe, condemning them is made to seem like more of a crime than the acts themselves. Greed and avarice are deplorable qualities. Walking into the Bank Of Constantinople and walking out with the Bank Of Constantinople? That’s art.

If there’s a more sophisticated comedy than Trouble In Paradise, I’m not aware of it. (And if there is, it was probably also directed by Ernst Lubitsch.) It’s sophisticated in its dialogue, which is full of naughty double entendres and clever turns of phrase; in its offhand style, which introduces Venice via a garbageman dumping trash onto a gondola, and reveals information about characters and the passing of time with deft indirectness; and in its European permissiveness about relationships and casual sex. In an introduction to the Criterion DVD, Peter Bogdanovich talks about how Lubitsch brought Hollywood past the lingering influence of D.W. Griffith and into a lighter, more continental cinema. He then marvels, “When was America that sophisticated? When was the world that sophisticated?”

It would be enough for Trouble In Paradise to be merely sophisticated, but it’s more than that: It’s about the elevation of sophisticated people, the triumph of the elites. Viewers root for Gaston (Herbert Marshall) and Lily (Miriam Hopkins), the thieves in love, because they’re smarter and wittier than anyone else, and whatever chemistry they have is owed to each recognizing the other as being on a higher plane of existence. The rest of the world are saps and marks, undeserving of the cash and jewels Gaston and Lily extract so effortlessly from their persons; when Gaston takes a wallet from a dolt in the same hotel, all he has to do is pretend he’s a doctor, distract his mark with tonsil-talk for 15 minutes, then lift the prize from his jacket pocket. And when they’re together, the audience can only marvel at the deftness of their hands and speech, and luxuriate in the pleasure they take in each other’s felonious company:

The scene above takes place early in Trouble In Paradise, with Gaston and Lily introducing themselves as a gentleman and lady of royal stature, but soon revealing themselves as operators of the first order. They fall in love, and in the whisk of a year that spans seconds of screen time—Lubitsch is a wizard with the passing of time—they’re happily coupled, having travelled the world on various capers. (Lily: “Don’t you remember the day you took that Chinese vase from the Royal Palace? And you made it into a lamp for my night table.” Gaston: “I remember the lamp, I remember the night table… and I remember the night.”) In Paris, Gaston snags an expensive purse belonging to Mme. Colet (Kay Francis), the heiress of a perfume manufacturer, then seizes the opportunity to turn a short con into a long one. Rather than taking the 20,000 francs offered for the purse’s return, Gaston accepts a job as Colet’s personal secretary in order to get access to her safe—and encourage her, in his capacity as business advisor, to keep more cash in it. For her part, Lily gets a job as Gaston’s secretary, but Colet proves a tougher mark (and romantic rival) than they assumed she’d be.

Colet becoming an intellectual equal to Gaston and Lily, rather than another hapless blueblood, makes Trouble In Paradise a genuine romantic triangle, and complicates their plans in a way that enhances the comedy and naughtiness. She isn’t the dope they expect her to be, which raises the stakes for Gaston, who isn’t making off with the loot so easily, and for Lily, who faces a true rival for her scoundrel’s heart. Colet also takes part in the relentless teasing of the squares who orbit around her. They include the bearded board members who huff over Gaston’s promotion in the company, but are powerless in their effects to discredit him; and two suitors, François Filiba (Edward Everett Horton) and The Major (Charles Ruggles), who fight each other bitterly over her heart, but don’t have the wit to make a claim on it. They’re pettier versions of the character Ralph Bellamy played later in screwball classics like The Awful Truth and His Girl Friday: The safe, bland romantic option, always left holding the bag.

In contrast to today’s rom-com characters, who downplay their movie-star glamour to seem more goofy, fallible, and just-like-us, Gaston, Lily, and Colet put viewers in an aspirational state. We may not be able to identify with people so impossibly beautiful and clever, but we can gawp in awe of their otherworldliness, and delight in their schemes and wordplay. There are also the pleasures of coquettish misbehavior, the “sin” in cinema. Produced before the Hays Production Code was properly enforced, with its absurd dictates both small (three-second kissing limits) and large (no sympathy shown toward the criminal kind), Trouble In Paradise was breaking it in letter and spirit, yet it doesn’t feel like a vulgar provocation.

And there’s that elusive, indefinable “Lubitsch touch” again, putting the audience in a state where thievery and promiscuity are turn-ons, but without feeling manipulative by being arousing. Trouble In Paradise plays on the illicit thrill of going to the movies, teasing out the fantasies we can indulge when the lights are out and the rules that govern society don’t apply. Here, colorful rogues like Gaston and Lily aren’t outlaws, they’re heroes, because they’re crafty, beautiful, and ready to pursue their happiness with a breezy disregard for social mores. “You are a crook,” Lily tells Gaston. “I want you as a crook. I love you as a crook. I worship you as a crook.” Lubitsch puts the audience in a state where we share the sentiment.

Tomorrow, our Movie Of The Week Forum discussion of Trouble In Paradise will discuss what defines “the Lubitsch touch,” what makes a screwball comedy, and what makes it all so sexy; then on Wednesday, Kim Morgan will provide a tour of Lubitsch’s charming, shocking Pre-Code trasnsgressions.