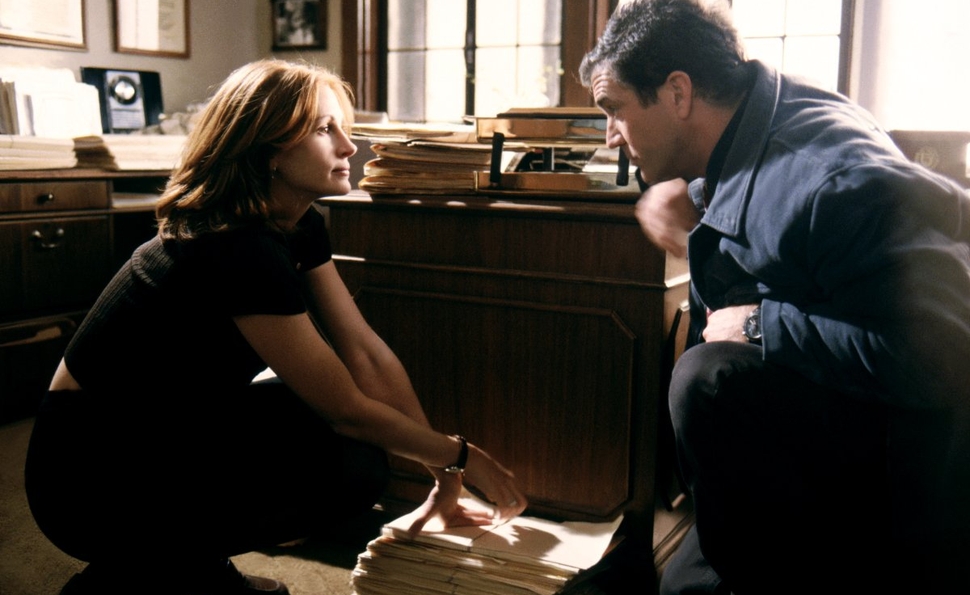 The tame madness of Conspiracy Theory

Wild-eyed craziness was an essential component of Mel Gibson’s professional persona well before it became the hallmark of the rest of his life. For instance, the rampaging id of madness gave his performance in Richard Donner’s Lethal Weapon a dark charge. In the beginning, at least, there was something subversive about the notion of a cop so tormented with inner demons that he doesn’t care whether he lives or dies, and is consequently more dangerous than a partner who is too old for a wide variety of shit. One cop merely carries a lethal weapon. The other, more extreme manner of cop might be said to be a lethal weapon.

Over the course of the Lethal Weapon movies, the exhilarating air of self-destructive mental illness Gibson brought to the role of Martin Riggs devolved into hammy shtick, as a series that began as gritty, funny, dark action-comedy became a bloated sitcom. Riggs became a joke, as defanged as Chucky from Child’s Play or Freddy Krueger from the later Nightmare On Elm Street installments. Past a certain point, he was just another cinematic goof cracking wise and entertaining the kiddies.

Mel Gibson’s performance as Jerry Fletcher, taxi driver and crazy conspiracy theorist in Donner’s 1997’s Conspiracy Theory, feels like a continuation of the collaboration that produced all the Lethal Weapon movies and Maverick. Only instead of mugging up a storm as cuddly old Martin Riggs, Gibson plays a character with 10 times the crazy and none of the filter. Nonetheless, audiences showed up to the tune of more than $75 million, making Conspiracy Theory 1997’s 19th most popular film, landing above I Know What You Did Last Summer and below Flubber.

He’s a cartoon, in other words, and Conspiracy Theory gets off to an appropriately cartoonish start with a sequence of frothing-at-the-mouth-mad Mel Gibson regaling the unfortunate passengers in his cab about the various conspiracy theories he ostensibly puts forth in his zine, also named Conspiracy Theory. The filmmakers wink at the audience by lovingly hauling out conspiracy lore, like Jerry’s belief that fluoride is being used to weaken the virility of the American people, a suspicion he shares with Sterling Hayden’s General Jack D. Ripper in Dr. Strangelove.

From the beginning, the film feels hopelessly ersatz. It’s Richard Donner’s version of Tony Scott’s version of Martin Scorsese’s Taxi Driver. But this is a Travis Bickle audiences will want to hug no matter how creepily he stalks scowling female lead Alice Sutton (Julia Roberts), a justice lawyer who does not seem to connect with him as a human being capable of free will and sentience, let alone as a love interest. Nevertheless, Jerry, who really should be the villain of this and pretty much any other movie he would be in, makes a ritual of sitting outside Alice’s apartment as she exercises and thinks about how badly she wants to find the man or men responsible for her father’s murder. Alice’s only purpose in the film, other than providing a much-needed break from Jerry’s rambling, is seeking vengeance. And in keeping with the laws of screenwriting economy, it turns out that Jerry and the main villain both played big roles in the death that haunts her.

Jerry earlier earned some good will when he saved Alice from a mugging, and apparently won a “Stalk Me For Life For Free” card in the process. She seems nonchalant about the mentally ill lunatic chasing her, at one point explaining her grudging acceptance of his nonstop following with a vague, “I guess I didn’t have the heart to tell him to get lost.” Roberts’ performance is so joyless, with so much misplaced gravity, it’s as if she’s trying to retroactively erase any time she’d ever smiled onscreen before, or caused anyone else in the world to smile through her acting. Conspiracy Theory was billed as a joint vehicle for Roberts and Gibson, two of the biggest and most charming movie stars in the world at the time, and the lack of chemistry these icons share borders on hypnotic. Forget Richard Gere: Conspiracy Theory evokes warm nostalgia for Roberts’ sultry bond with human tree-husk Nick Nolte in I Love Trouble.

Gibson delivers such a busy performance that he shuts everyone and everything else out. He’s forever doing a hammy double-act, talking to himself, sputtering and flailing, broadcasting his craziness to the cheap seats. Gibson’s version of acid-and-mind-control-induced-psychosis looks suspiciously close to the Three Stooges impersonations that litter his roles. For Gibson, there seems to be little difference between genuine mental illness and the burlesque of stupidity popularized by popular vaudevillians. Donner and screenwriter Brian Helgeland don’t seem to have any firmer a grasp on Jerry than Gibson does. Are we watching the complete unraveling of a violent and mentally ill man destroyed by the covert and sinister machinations of his own government, or the ongoing adorability of a love-struck goof with a head firing wildly with insane theories, but a warm heart crying out for that special someone?

There is something strangely comforting about conspiracy theories, which find patterns and logic in a world that often seems chaotic and insane. Many find the sinister logic of conspiracy theories preferable to the randomness of real life, where horrible things and violent tragedies often just happen, and there is no grand overarching conspiracy to blame. But for a film about a world gone mad, where the ostensibly crazy ones know the truth and the sane-seeming perpetrate madness, Conspiracy Theory is shockingly straightforward and predictable. A great conspiracy theory has a swirling, all-encompassing madness all its own. It becomes a self-contained system that explains everything and nothing at the same time, like in perhaps the greatest conspiracy-theory sequence of all time, in Black Dynamite.

By comparison, the central conspiracy in Conspiracy Theory suffers from a dearth of imagination. It seems that evil CIA operative Dr. Jonas (Patrick Stewart, doing his Patrick Stewart thing) brainwashed Jerry into becoming an assassin. And not just any assassin, mind you: He was brainwashed to assassinate Alice’s father! It’s at this point that the weird, maudlin streak of romanticism coursing through the film really comes to the fore. Jerry realizes he was supposed to kill Alice’s father, but just couldn’t, so they became friends, and once Jerry saw Alice’s image, he decided to devote his life to protecting her, even if that protection might, from a distance, look an awful lot like deranged stalking.

Jerry and Alice’s romance isn’t tragic and impossible so much as clammy, creepy, and completely unfeasible. They’re vastly different people at strikingly different stages of human development. Alice is all scowling adult responsibility, while Jerry is a mentally impaired man-child, a kook luxuriating in his own paranoia. Jerry’s most embarrassing monologues all relate to love, and his fierce conviction that true love, the kind he believes he shares with the emotionless woman he gawks at through binoculars, fills a man with such bravado and conviction that he’s willing to leap off a tall building and yell, “Geronimo.” That might seem like incoherent blather, but it comes into play in a third act that sometimes feels like a Harlequin romance written from a stalker perspective—Stephen King’s Misery, if it were ultimately about how Paul and Annie really were meant for each other. 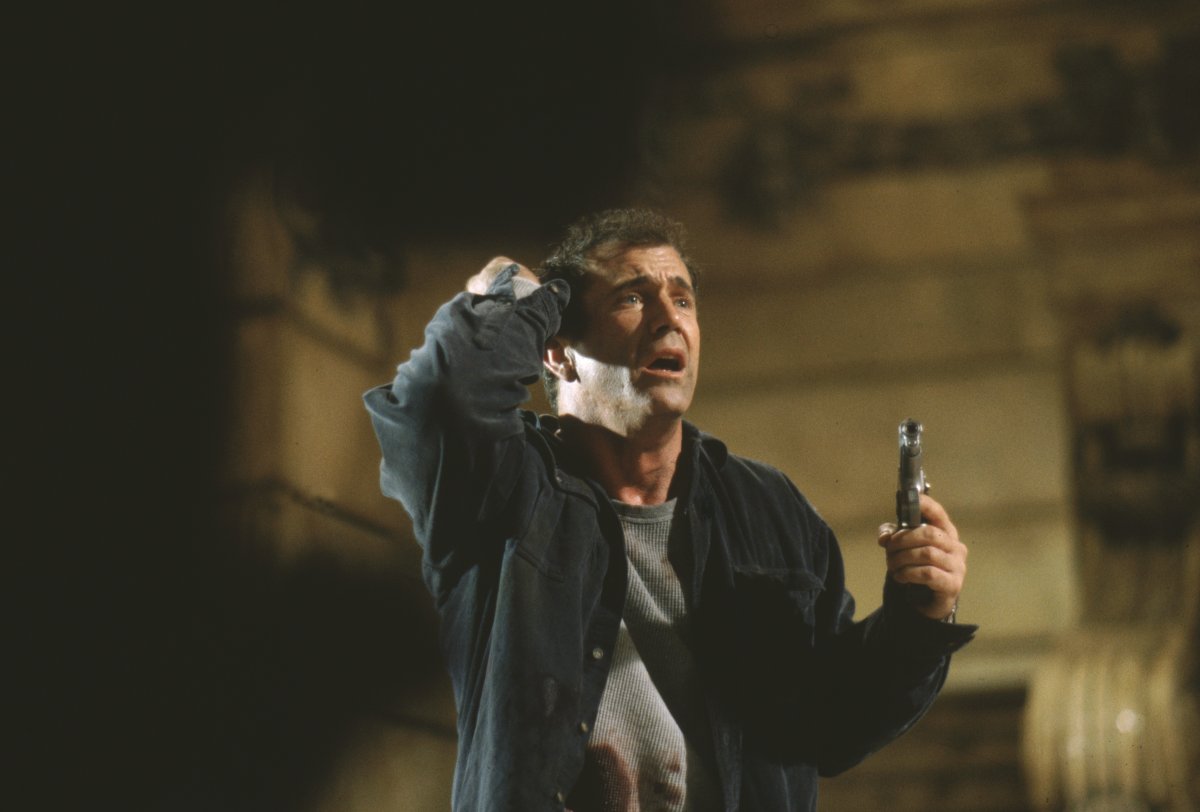 In its bid to be everything to everyone, Conspiracy Theory ends up being a highly polished nothing. It’s a movie about a dark, shadowy secret world that couldn’t be more conventional or rule-bound in its storytelling or worldview. It’s a romance between two movie stars who barely seem able to tolerate each other, biding their time until production wraps and they never have to see each other again. It’s a thriller devoid of suspense, a dark comedy with cutesy gags about assassins always having three names and being irresistibly drawn to Catcher In The Rye, but not a single laugh to be found.

Gibson is intimately familiar with the geography of madness, which makes it all the more disappointing that he turns in a version of mental illness that plunges deliriously into minstrelsy, a twitching, mugging, contorting, mumbling self-parody. A lot of darkness has transpired since Conspiracy Theory’s 1997 release, both in Gibson’s life and in the world at large, that should lend it contemporary resonance, particularly given its New York setting. At the very least, the attacks of 9/11 should push some of Jerry’s fevered conspiracy-mongering into bad taste. Yet time has stubbornly refused to make Conspiracy Theory interesting. And if the events of the last 16 years haven’t given it even the faintest pulse of life, or at least a perverse kick, then nothing will.