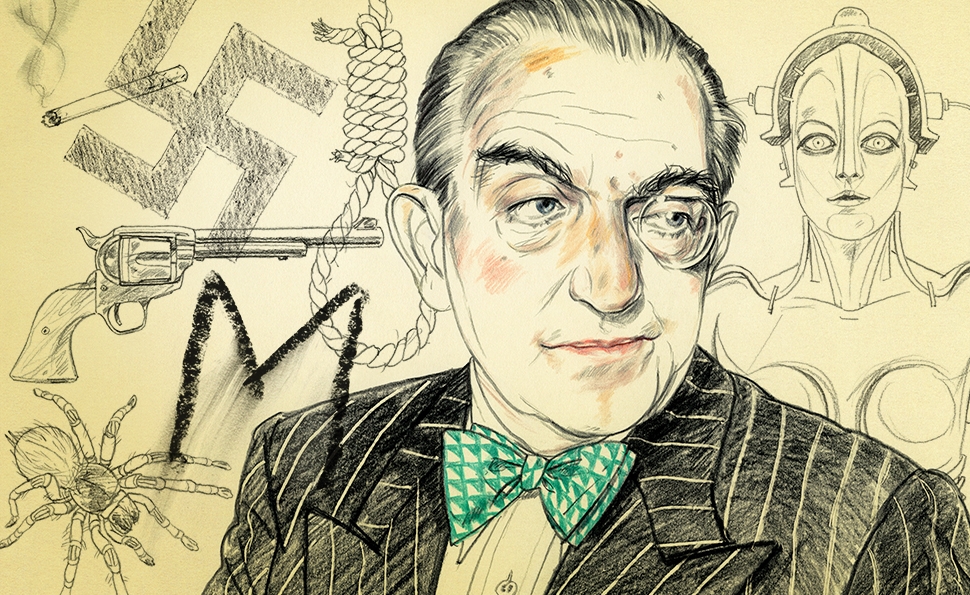 As one of the premier visual storytellers of the silent era, Lang didn’t embrace talking pictures right away, and when more than a year passed after Woman In The Moon with no new Lang film, some German critics wondered if he’d chosen to give up the business rather than work with a soundtrack. Actually, Lang was doing just as he’d done with Die Nibelungen and Metropolis: immersing himself in research and pre-production on his next project. That project, M, was released in 1931, and recast the crime-fighting themes of The Spiders, Spies, and Dr Mabuse: The Gambler in the spirit of “The New Objectivity.” Peter Lorre plays Hans Beckert, a psychopathic serial killer (of children, no less) whose murders send Berlin into a panic, leading the police to conduct raids throughout the city and obstruct ordinary criminal business. M is rooted in realism, filled with up-to-the-minute details of police work and pathology, but it’s also a pointed sketch of an increasingly divided and dangerous Germany, toward the end of the Weimar Republic. (The original title of the film, Murderer Among Us, reportedly raised red flags among the rising Nazi party.)

It’d be wrong to say that Lang shows more empathy in M for a murderer than he does for law-abiding citizens, but Hans does get a powerful speech toward the end where he curses his own compulsions, while the bloodthirsty frenzies of the media, the cops, the public, and the gangs carry on, unrestricted. M is a powerful plea for personal responsibility, using a shocking comparison to urge audiences away from their habit of just going along with the crowd. But what really makes M such a consensus classic is the way Lang retains his silent-film techniques—telling much of the story without any dialogue, and using images of painful absence to represent the children Hans kills—while finding ways to integrate sound in ways that are suggestive, not merely functional. From Hans’ repeated whistling of “Hall Of The Mountain King,” to the way that a crowd of protestors chants like schoolchildren, Lang creates associations and atmosphere with the new technology.

Lang then carried both the more grounded approach of M and its tough take on German society into The Testament Of Dr. Mabuse, a sequel to his 1922 hit (and also in some ways a sequel to M, in that both M and Testament feature Otto Wernicke playing a police inspector named Lohmann). Rudolf Klein-Rogge reprises his role as Norbert Jacques’ hypnotist/supervillain, but only briefly, since Mabuse dies early in the film, leaving behind a stack of writings that continue to corrupt the people who read them. It isn’t Mabuse himself who guides the choices his disciples make; it’s the idea of Mabuse. Sometimes he appears to people as a spectral vision, and seems to take possession of their bodies; at other times, he’s nothing but a disembodied voice, heard from behind a curtain, in a featureless room, in a shadowy part of the city. Again, as with M, Lang relies on clever sound design and compositions to tell the story, but The Testament Of Dr. Mabuse is more action-packed, like a refined version of Lang’s early pulp serials.

The morally compromised world depicted in the second Mabuse film could be read as a commentary on any era where men do evil in the name of ideology. But Lang always claimed it was a comment on Nazism, and how human weakness allows dictators to rule and fascism to spread. The Nazis themselves didn’t miss the connection. While Joseph Goebbels once asked Lang to make movies for the state, he ultimately banned The Testament Of Dr. Mabuse in Germany. By then, Lang had seen the writing on the wall, and left his home, taking refuge in France alongside his former UFA producer and fellow exile Erich Pommer.

Pommer had a deal with Fox Film Corporation (prior to its merger with 20th Century Pictures) to set up a production company in Paris, and he had Lang and director Max Ophüls in his stable. But Lang’s first and only film for Fox Europa was something of a bust, commercially and creatively. In later years, Lang claimed that his adaptation of Ferenc Molnár’s stage play Liliom (which later inspired  the Rodgers and Hammerstein musical Carousel) was a personal favorite, echoing Destiny in its tale of a grouchy carousel barker who dies, then gets a second chance to prove himself when heaven sends him back to earth for a day. But while Molnár’s scenario let Lang re-deploy his gifts for the fantastical, the story demands a lighter touch that Lang generally lacked. The scenes between Liliom (Charles Boyer) and his lover Julie (Madeleine Ozeray) have some of the social-realist smack that Lang returned to in the 1950s, but they’re so earthy that they undercut the play’s more whimsical turns. If Lang was going to continue his journey into the grimier side of human existence, he’d have to try a different approach—and do so somewhere else. 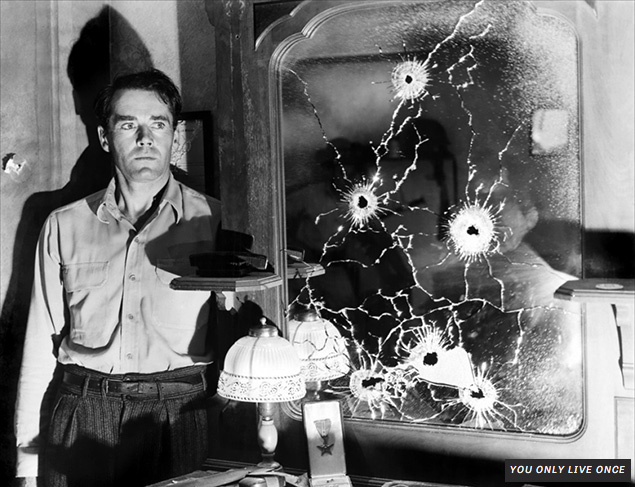 Because language barriers weren’t as significant in the silent era, Lang was already known to the American film industry before he moved to the States; perhaps because he was already respected by those in the know, he was given some latitude to make “Fritz Lang films” when he first arrived in Hollywood. Lang had to deal with more content restrictions, and interference from studios that demanded changes or cuts. But he also had access to new resources—actors, writers, and crew who could bring his visions to life more quickly and efficiently than any had before—and new locations in which to explore some of his same old themes. Lang’s first five Hollywood pictures run the gamut from fevered social-problem films to colorful Westerns, with one eccentric musical romance mixed in, but the same types of characters pop up in each: hard men trying to atone for bad choices, in communities inclined to judge them by their reputations.

In Lang’s 1936 English-language debut Fury, Spencer Tracy plays the flip side of Peter Lorre’s character in M. Tracy’s Joe Wilson gets accused of a crime he didn’t commit, then gets almost killed by small-towners who burn down the jail to prevent him from wasting their money and time on a trial. Left for dead, Joe sneaks away, then works behind the scenes to bring his would-be killers to justice. Fury is an astonishingly expressive film—much more so than Lang’s last few German pictures—using subjective tracking shots and satirical montages of clucking chickens to mock rioters and make the righteous look phony. Fury is heartland Americana knocked askew, with petty gripes about taxes and lawyers escalating into murderous rage. Lang and screenwriter Bartlett Cormack take a contemporary scourge—lynching—and make their audience live through two different versions of it, asking whether Joe’s more methodical revenge is any less cruel than what was done to him.

Lang brought that same intensity to 1937’s You Only Live Once, which stars Henry Fonda as Eddie Taylor, an ex-con whose efforts to live a clean, blue-collar life with his girl Jo (Sylvia Sidney) are stymied by landlords who don’t trust him, bosses who keep him on a short leash, and old cohorts who use him as a patsy. Like Fury, You Only Live Once has a bifurcated structure, with a first half focusing on Eddie’s increasing disillusionment with the straight life, and a second half about his desperation after he’s charged with another major crime. Lang uses exaggerated perspectives and dreamy imagery to document Eddie’s emotional state at every juncture, from the rippling reflections in a picturesque pond when he’s wooing Jo to the long shadows of bars that stretch across him when he’s in trouble.  The film is also corrosively ironic: When Eddie awaits his last meal on death row, one of the guards quips, “First they kill the chicken, Taylor eats the chicken, then they kill Taylor.”

Lang relied on screenwriters for lines like that (You Only Live Once is credited to C. Graham Baker and Gene Towne), and for most of his time in Hollywood, he was stuck with whatever assignments he was offered. Yet again and again, Lang’s films stood up for the dignity of even the most tarnished individual, while suggesting that the real evil in the world lies in the social machinery that grinds people down.You And Me, written by Norman Krasna and Virginia Van Upp, isn’t one of Lang’s best-known films—largely because it’s never been released on DVD in the U.S.—but while it isn’t on par with his masterpieces, it’s practically a thesis statement for Lang’s career, in that it makes that “Who are the real enemies?” question plain. Sylvia Sidney stars as Helen, a parolee working at a department store staffed by former hoods, including the man she ultimately marries, Joe Dennis (George Raft). As Joe considers a return to crime, You And Me honestly explores the desire for consumer goods and the appeal of the outlaw life—occasionally via songs (!) with music by Kurt Weill (!!)—until Helen stops the show with a math lesson for Joe and his gang, explaining in detail why crime only pays for big shots and politicians.

Even Lang’s two early-1940s Westerns are thematically on-point, even though they’re very different in tone from what he’d done before. Colorful and often comic, 1940’s The Return Of Frank James and 1941’s Western Union both take a breezy approach to two historical subjects—the life of Jesse James’ brother after the outlaw’s assassination, and the expansion of the telegraph through the Midwest, respectively—then turn them into studies of morally compromised but still fundamentally decent men. Henry Fonda plays Frank James as a humble, dry-witted guy trying to downplay his infamy even as he’s fully aware of himself as a historical figure in a complicated time for America. And in Western Union, Randolph Scott plays Vance Shaw, a criminal looking to reform himself by taking an honest job stringing wire. Both films make direct reference to the American Civil War—it’s a bone of contention in Frank James’ climactic trial in the former, and something Shaw’s former gang uses as an excuse to steal from Yankee travelers in the latter—and both show people of the past as governed by the same bigotry, arrogance, and desire as their descendants. In a reprise of You And Me’s opening array of luxury items, for example, Lang establishes the way of life in 1860s Omaha in Western Union via a montage of the city’s amenities: guns, booze, and lingerie.