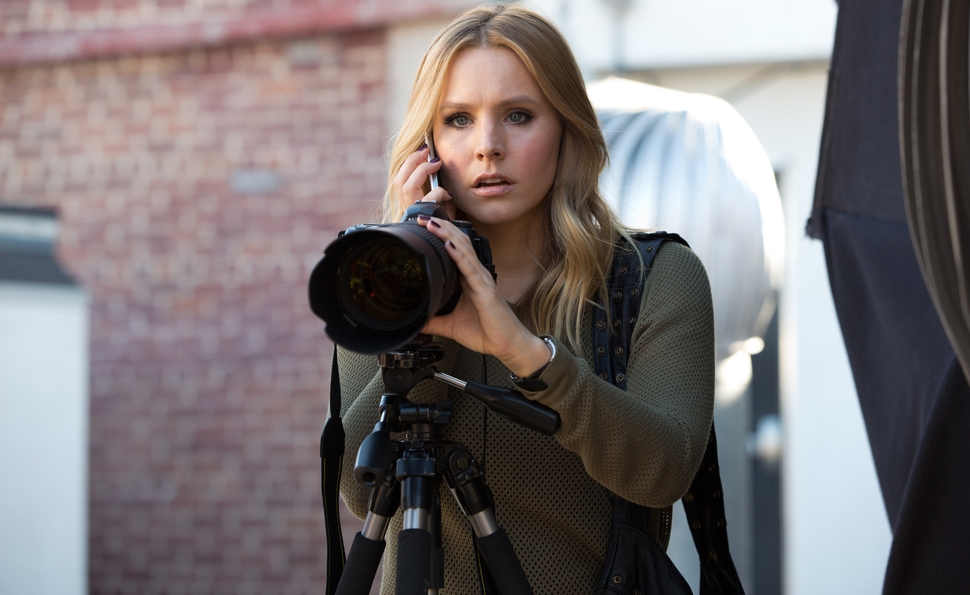 Veronica Mars isn’t the first film that can claim to have been willed into existence partly through fans’ enthusiasm, but it’s one of the first that can attach a specific dollar value to that enthusiasm. Specifically: $5.7 million. That’s the amount Rob Thomas, creator of the TV show of the same name, raised via Kickstarter to ensure the film got made. Asking for a $2 million buy-in from the public, he raised it quickly and went well beyond expectations, tapping into a desire among the fans of the series, which ran for three seasons on UPN and The CW from 2004 to 2007. Not many watched the show about a teen detective investigating crime in the economically divided city of Neptune, California, but those who did adored it, and in the years since, Thomas kept the flame alive while Veronica Mars picked up a larger following. Now that support has led to this resurrection as a sharp feature film that’s sure to please anyone who’s wanted to see Veronica (Kristen Bell) and her supporting cast back into action—and likely to puzzle anyone else.

The first question TV-to-film adaptations usually raise is “Does this work as a movie apart from the show?” Veronica Mars raises a different question: “Does it have to?” This is a movie tailor-made for a specific audience who demanded it, presumably one perfectly happy for a movie very much in the mold of the show that inspired it. Wish granted. Despite some opening minutes that play like a “previously on” montage, there’s little here to bring newbies up to speed, and the film is so laden with callbacks and in-jokes that its ideal audience isn’t just Veronica Mars fans, but Veronica Mars fans who just finished binge-watching the entire series. There’s little to set the film apart from the show visually, either. As a movie, it looks and plays an awful lot like the TV show, reviving its darkened-rooms-and-Venetian-blinds and beach-noir aesthetic. Fortunately, Veronica Mars was a pretty great TV show, and while the Veronica Mars film feels a bit small and closed-off by big-screen standards, it will no doubt be big and welcoming enough to those who love the series.

Veronica Mars opens not in Neptune, but New York, where Veronica, having earned degrees from Stanford and Columbia Law, is interviewing for a high-paying job and living a relatively quiet, normal life with college boyfriend Piz (Chris Lowell), now a producer for This American Life. Though determined to avoid her 10th high-school anniversary, she’s nonetheless drawn back to Neptune following the murder of a classmate-turned-troubled-rock-star, a murder in which her ex-boyfriend Logan (Jason Dohring) has become the prime suspect.

Once in California, the film begins a parade of supporting cast members, from Veronica’s pals Wallace (Percy Daggs III) and Mac (Tina Majorino) to her P.I. father Keith (Enrico Colantoni), wrong-side-of-the-tracks contact Weevil (Francis Capra), and others. And with them appear some of the problems of turning TV shows into movies. Where before, each appealing supporting character could have whole episodes in the spotlight, here everyone has a minor role to play, ceding time to the central mystery. They also cede time to Veronica’s tumultuous relationship with Logan, as the film attempts, not always gracefully, to pack a whole season’s worth of ups-and-downs into the running time of two and a half episodes.

Those seemingly unavoidable pitfalls aside, Thomas and co-writer Diane Ruggiero, another series veteran, make the space they’re given count. The cast easily slips back into old roles and old chemistry, and the script retains the show’s wit, from Veronica’s biting narration to a mystery tied to the setting’s haves-vs.-have-nots culture. It’s briskly entertaining as a mystery, and such a pleasing revival that it’s not even that frustrating when the film concludes on more than one bit of unfinished business. Now that we live in a world where wishing for more Veronica Mars can make it happen, it’s easy to wish for even more.