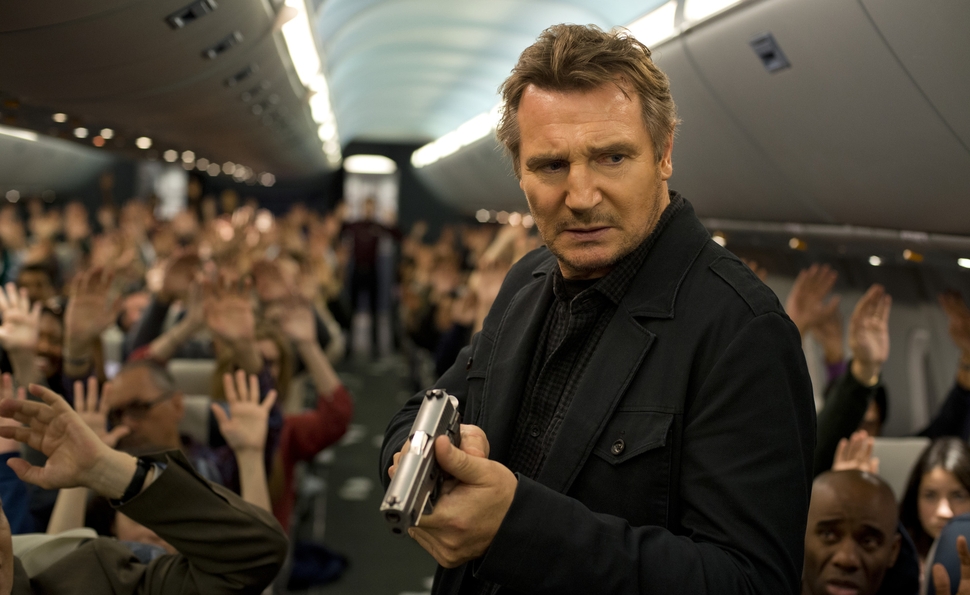 The Liam Neeson thriller Non-Stop makes two calculated bets with the audience, one more successful than the other. The first is that limiting the action almost entirely to an airplane heading across the Atlantic will keep it tense and contained, the classic “Die Hard on a...” model. It takes some ingenuity—and no small measure of writerly bullshit—to sustain tension over that long a period of confinement, but that’s never a problem with Non-Stop, which adds an Agatha Christie whodunit wrinkle to the usual one-man-army scenario. The second bet is plopping the audience into the pot and turning up the gas, hoping it will accept the escalating implausibility like a frog in boiling water, barely noticing that this simple hijacking premise had ventured into increasingly ridiculous places. And that’s where Non-Stop goes wrong: The water gets awfully damn hot.

Grizzled even by his standards—short of The Grey, but firmly on the wino spectrum—Neeson is first shown sipping brown liquor from a paper cup outside the airport, reluctant to head in for his flight. It’s revealed a little later that this sad drunk with a past is Federal Air Marshal Bill Marks, assigned with protecting a flight from New York to London. (Non-stop, as the title indicates, so without the standard layover in the middle of the Atlantic Ocean.) Shortly after takeoff, Bill starts receiving text messages warning that a passenger will die every 20 minutes until $150 million is wired into a secret account. Who on board could be sending these messages? His row-mate Jen (Julianne Moore), who insisted on a window seat? The off-duty police officer (Corey Stoll) with a short fuse? The suspiciously helpful stewardess (Michelle Dockery), who’s the closest thing to the butler in this scenario? A little girl flying alone for the first time to see her daddy? Academy Award nominee Lupita Nyong’o?

Everyone’s a suspect—except for the little girl, who A) doesn’t have a cell phone and B) is a little girl—and a plane full of shifty-eyed passengers and crew members makes Non-Stop fun while it lasts. Bill’s personal problems are also spilled out into the open, which makes him a target, too, adding to the cabin pressure. At its best, the film defies The Law Of Economy Of Characters—in which the villain would be the odd person out—by stuffing the screen with possible bad guys, then having Bill and his fellow passengers constantly looking askance at one another. Nary a person goes unpunched.

Director Jaume Collet-Serra collaborated with Neeson previously on the amnesiac thriller Unknown, and Non-Stop follows a similar pattern: catchy high-concept premise and swiftly orchestrated action that’s eventually undone by runaway plotting. Non-Stop asks, not unreasonably, for some suspension of disbelief, but it just keeps on asking and asking until it become comically absurd to think through all the variables the culprit had to take into consideration. When the mask finally comes off, the real purpose of the hijacking is equally confused and tasteless in evoking real-life tragedy, matched by action that treats the physics of flight like the physics of deep space. Neeson’s innate dignity can often serve as a gravitational force for movies this ludicrous, but in a cabin filled with so much flying debris, he is but an ineffectual paperweight.