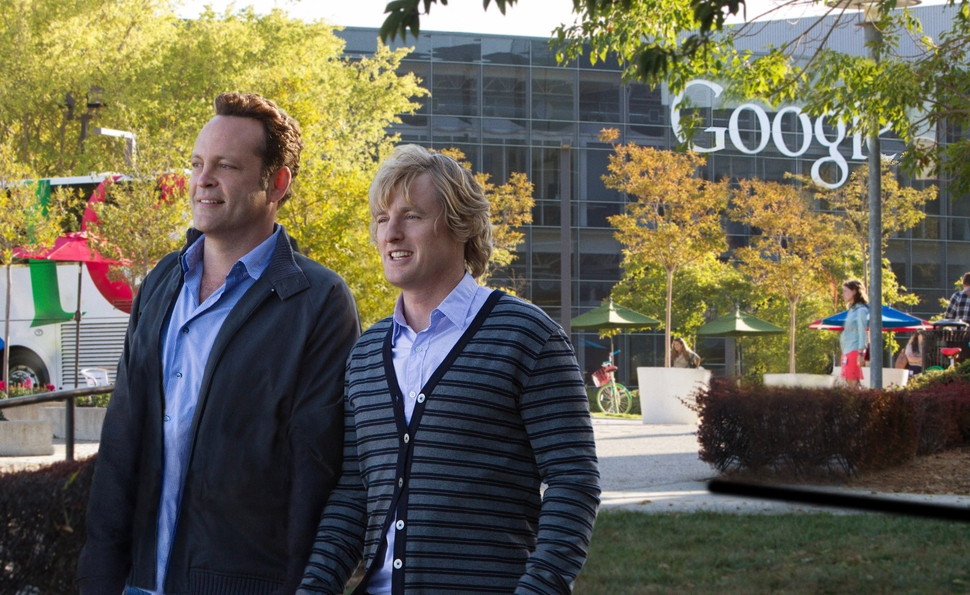 There are bad movies, and then there are movies whose success would bode ill for cinema’s future. The Internship is the latter. Shawn Levy’s sentimental comedy of self-improvement through corporate devotion is every bit as aggressive and shameless in its advertising integration as previous nadirs like the notorious E.T. knockoff/McDonald’s commercial Mac And Me, and Foodfight!, the doomed animated fiasco that paired a dog detective voiced by Charlie Sheen with a gallery of corporate mascots in an epic battle for a supermarket’s soul.

Foodfight! and Mac And Me boasted an energizing vulgarity and warped personality that made them instant camp curiosities. The Internship, in sharp contrast, feels slick, soulless, and antiseptic. It’s as if Google resolved to pay Vince Vaughn and Owen Wilson a few million dollars to reprise their Wedding Crashers characters for a corporate video about salesmen who teach the company’s whiz kids a thing or two, then decided the line separating advertising and entertainment was slippery enough that Google might as well turn that conceit into a full-length film.

Levy’s would-be crowd-pleaser inhabits a weird time warp. The “computers will lead us into a glorious future” utopianism feels like a relic of the 1990s dot-com bubble, even though many of the innovations promised by Clinton-era irrational exuberance have come to pass. (Twenty years ago, it would have been impossible to imagine a major studio making a big summer comedy about the competition for an internship at a search engine.) Otherwise, the film suggests a 1980s slobs-vs.-snobs underdog comedy redesigned for a new era of corporate synthesis and brand integration, complete with such fixtures as the mysterious geek who figures prominently in the climax (think Real Genius), a sneering villain with an effete British accent, and the nerdy, anxious Asian kid driven to self-harm out of anxiety over disappointing his demanding mother.

But The Internship’s fusion of branding and content feels unmistakably, dispiritingly contemporary. Vince Vaughn (who also co-wrote the film’s abysmal screenplay) and Owen Wilson have their names above the title, but the true star of the movie is Google, a popular search engine whose campus is depicted as an earthly Valhalla, and whose internship program is portrayed as the embodiment of the modern American dream.

The Internship begins with old-school salesmen Billy McMahon (Vaughn) and Nick Campbell (Wilson) discovering from a client that the company they work for is going out of business, rendering them smile-and-a-handshake dinosaurs in a scary new world of faceless e-commerce. In a desperate attempt to keep up with the times and save their faltering careers, Billy convinces Nick to join him in applying for internships at Google. Billy and Nick don’t know anything about computers, technology, or search engines, but as white, heterosexual, middle-aged men, they have something much more valuable to a technology company: The diversity of life experience that can only come with decades of selling watches to other middle-aged men over boozy steak dinners. In other words, they provide the human element missing from their perfectionist young internship competitors, with their Ivy League educations and obliviousness about everything but technology and ruthless ambition.

Once the protagonists make it to the promised land of the Google campus, they’re batched in with the misfits and oddballs, though the film’s conception of “oddball” is generous enough to include two contenders who are model-gorgeous, but slightly socially awkward. Together, they’re pitted against frighteningly qualified opposing teams in an all-out war for the ultimate trophy: an internship at Google, and an opportunity to get in on the ground floor of a massive corporation. The driven strivers here aren’t even fighting for good jobs. They’re fighting for a chance at a good job.

The Internship establishes its protagonists as randy, irreverent troublemakers, the kind of guys who might, say, crash weddings in their spare time. Yet before long, both characters have unconvincingly evolved into kindly wise-uncle figures who dole out life lessons for their overeducated, underexperienced protégés every 10 minutes or so, as strings soar dramatically. 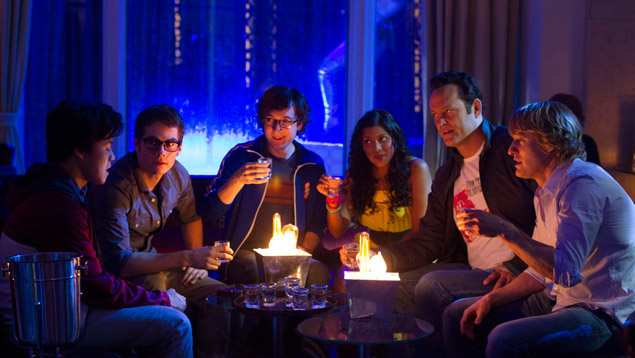 The Internship exists for the times when its stars get into a groove and play off their well-worn chemistry, but those moments are few and far between. It’s impossible to make an irreverent comedy centering on a deep, unambiguous, comedy-killing reverence for a corporation. The Internship is ultimately more interested in espousing the glory of Google, whose logo shines like a golden halo in countless shots, than in re-creating the quasi-magic of Wedding Crashers.

A smug sense of entitlement permeates The Internship. It’s a film that seems to think it’s won the war—in part due to its association with the amazing corporation Google—before the battle has even begun. It trades unabashedly in the safe, familiar, and already popular, trotting out Flashdance as a running gag and basing a big setpiece on Quidditch, from the Harry Potter books. The Internship isn’t a movie about old-fashioned salesmen stumbling, then thriving, in a brave new world. It’s an exercise in bogus salesmanship from charlatans passing off advertising as entertainment.