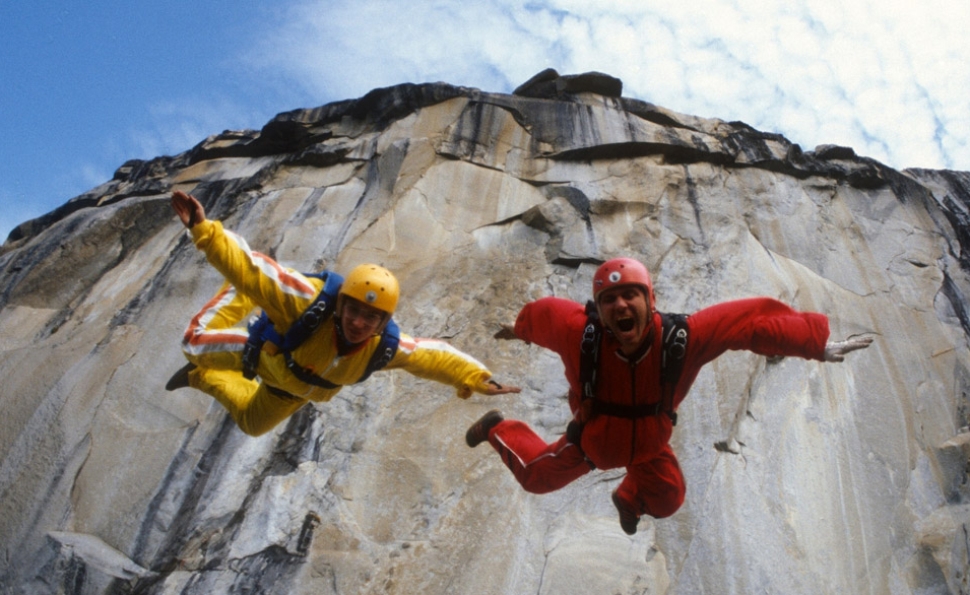 Sunshine Superman, a portrait of BASE jumping founding father Carl Boenish, effectively captures the irrepressible energy of a man who never tired of taking flying leaps. But it also does something even rarer for the documentary genre: It demands to be shown on an IMAX screen.

Weaving archival footage from Boenish daredevil-in-the-clouds short films with sweeping shots from jaw-dropping heights—including stunning aerial imagery of Norway’s famed Troll Wall—director Marah Strauch creates a tapestry of high-in-the-sky awesome that sometimes feels as though the audience is looking down on Earth via a Steadicam being operated in heaven. The story of Boenish, who parlayed his interest in skydiving into a career as a filmmaker/adventurer who freefell from L.A. skyscrapers, Yosemite’s El Capitan, and that Troll Wall, is an effectively compelling narrative about the thin line between excessive risk and supreme gutsiness, in BASE jumping and in life. And the views in that story…well, they’re just spectacular.

As Strauch traces Boenish’s story from his childhood—which involved a brief period spent anchored to a wheelchair while recovering from polio—to his life-changing role as aerial photographer working alongside John Frankenheimer on the 1969 sky-diving picture The Gypsy Moths, she occasionally relies on staged reenactments to illustrate key Boenish milestones. Sometimes those reenactments work seamlessly; other times, like the moment that depicts the night he met his wife and fellow BASE jumping pioneer, Jean, come across awkwardly. Luckily, Boenish was as skilled behind the camera as Strauch and her two cinematographers, Vasco Nunes and Nicolay Poulsen; any reenactment missteps are quickly forgotten during Boenish’s shots of skydivers in red, white and blue, separating from their formation like an American flag slowly becoming pixelated.

Even those who approach Sunshine Superman with minimal knowledge of Boenish’s story will sense a creeping potential for tragedy, as numerous sources— including his colleagues in high-altitude exploration, family members, his wife, and Boenish himself—attempt to put his ambitions toward ascendancy into perspective. “There’s no future in growing up,” Boenish says in one old interview clip. Gradually, it becomes clear that there are no contemporary talking-head shots of the documentary’s protagonist, giving that statement about no future an ominous meaning. The truth about Boenish’s fate is withheld until almost an hour into Sunshine Superman, a decision that makes sense for the kind of movie Strauch is trying to make. The niece of a BASE jumper herself, she doesn’t shy away from acknowledging the dangers inherent in the sport. But her ultimate goal is to celebrate the gutsy, carpe-diem aspect of what Boenish and his fellow human hang gliders do.

Sunshine Superman succeeds at that objective, majestically conveying the rewards of leaping into thin air thousands of feet above the ground. Sure, people do it for the rush, as Jean Boenish and others in the film note. But as all that IMAX-worthy cinematography demonstrates, they also do it for the feeling of peace that comes from just hanging up there and believing that, as Boenish says at one particularly significant moment, if you jump, the angels will take care of you.