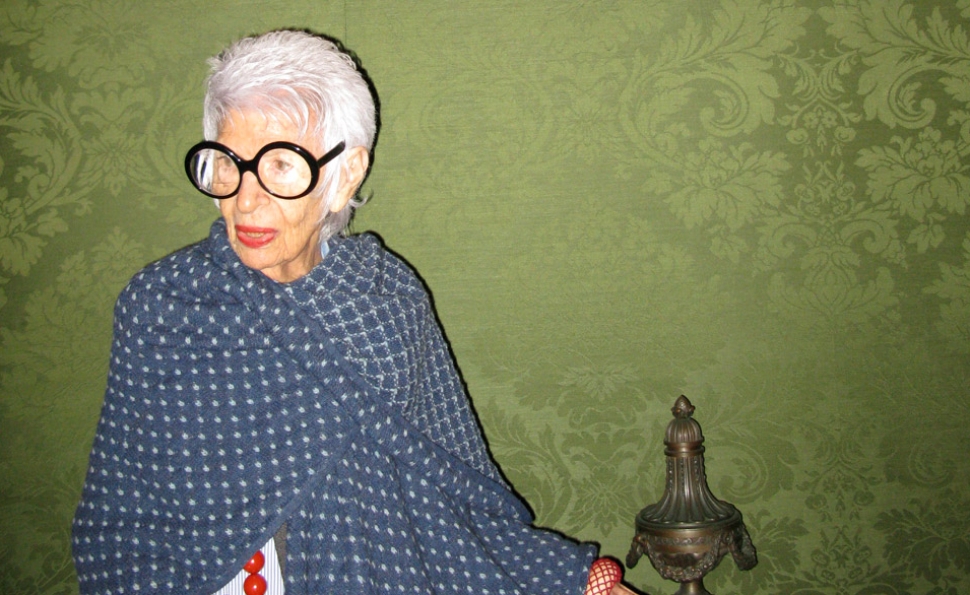 “Life is grey and dull, and you might as well have a little fun when you dress, and amuse people.” So says 93-year-old fashion icon Iris Apfel in Albert Maysles’ Iris, a good-natured doc that largely just follows Apfel around like an eager protégé, lapping up her one-liners and nuzzling over her wild ensembles. Apfel is an influential interior designer who co-founded a successful textiles firm, did restoration work in the White House for a series of presidents, and does seemingly non-stop consultation and curation work, but Maysles (who died in March 2015, with this and In Transit as his last completed films) doesn’t much seem interested in the details. The film flows smoothly over her day-to-day life without much concern about exactly which magazine is shooting her for the cover, or which store she’s working with on a personal-style consulting project. It’s more fascinated with how much fun she has when she dresses, and how much she amuses people.

There isn’t a lot of punch to Iris, a largely shapeless collection of well-shot scenes where Iris works with designers, fashionistas, and students. Some of that material gets same-y—there’s only so much to be said about how this garish bangle complements that embroidered top, or how textures or patterns work together. But when Maysles gets Iris talking about her past or speaking her mind about the world, she’s entertainingly frank without being confrontational. Speaking on how she disapproves of plastic surgery—she’s known people who came out as lopsided as Picassos, she says, plus what’s the use of having a taut face when sagging hands will give your age away?—or how useless and ephemeral “pretty” is, she’s an endlessly aspirational figure for a fashion industry obsessed with youth and looks. Better yet, her loud, strange ensembles, which blend many decades of collected big-name couture with flea-market finds and her signature Edna Mode glasses, speak to the kind of intensely idiosyncratic tastes that have no interest in following trends or copycatting other designers. “I like individuality,” Apfel grouses at one point. “It’s so lost these days. There’s so much sameness, everything is homogenized. I hate it.”

Iris hearkens back to one of Maysles’ first and most memorable docs, 1975’s Grey Gardens. Apfel reads like a version of Little Edie who’s devoid of melancholy, neuroses, and barely hidden desperation. Both women share a fascination with personal style and a genteel but fragile way of carrying themselves; both share a similarly calm but significant ego, and an unusual sense of self-worth that dodges arrogance in favor of confidence. (And both women have a taste for turbans, tight pants, and proudly assembling bits and pieces into makeshift ensembles.) But where Little Edie had a crumbling house and a lifetime of regrets, Apfel had a long, successful career in the fashion industry, and she comes across as entirely pleased with who and where she is. It certainly helps that where Little Edie has her waspish, demanding mother looking over her shoulder at all times, Apfel has her century-old husband Carl, who seems supportive, devoted, and endlessly entertained by her adventures. The two banter and bicker comfortably throughout the film, as Iris jets from event to event. It’s an easygoing partnership, 66-plus years in the making, and Maysles puts it close to center stage throughout the film.

Maysles shoots Apfel much as he and his brother shot the Edies back in the 1970s: He stands back and observes, seeming uncomfortable when his subject acknowledges him and his camera crew, and tries to get him to talk. Iris differs in that it brings in a handful of not particularly compelling talking heads to discuss Apfel’s importance, or to dissect a particular milestone in her life, an acclaimed 2005 Metropolitan Museum Of Art showcase that simply put a series of her outfits on display. But Iris doesn’t dig particularly deeply into her history or identity. It doesn’t need to. She’s perfectly willing to put it all on display.

Iris isn’t groundbreaking doc filmmaking, but it’s amiable and jovial in a way rarely seen in the field, which tends more toward drama, trauma, and forwarding big causes. Maysles doesn’t seem to have an agenda, beyond capturing Apfel as she is in this moment, as a complete, highly specific, and thoroughly charming character. The film follows her on shopping expeditions, where she haggles with everyone, and defends haggling. It follows her into her teetering closets, where she explains specific favorite items. It’s like hanging out with an irascible friend who wears thoroughly impractical clothing, but has an entirely practical attitude toward life. “Nothing I ever did, I intended to do,” Apfel says about her immense late-life success at one point. “Everything just happened.” Iris similarly feels like a film that just happened over the course of a lengthy hangout session with a buddy, but all of its appeal, like Apfel’s, comes in that casualness. Both she and the film are content with what they are, and don’t need to pretend to be anything else.