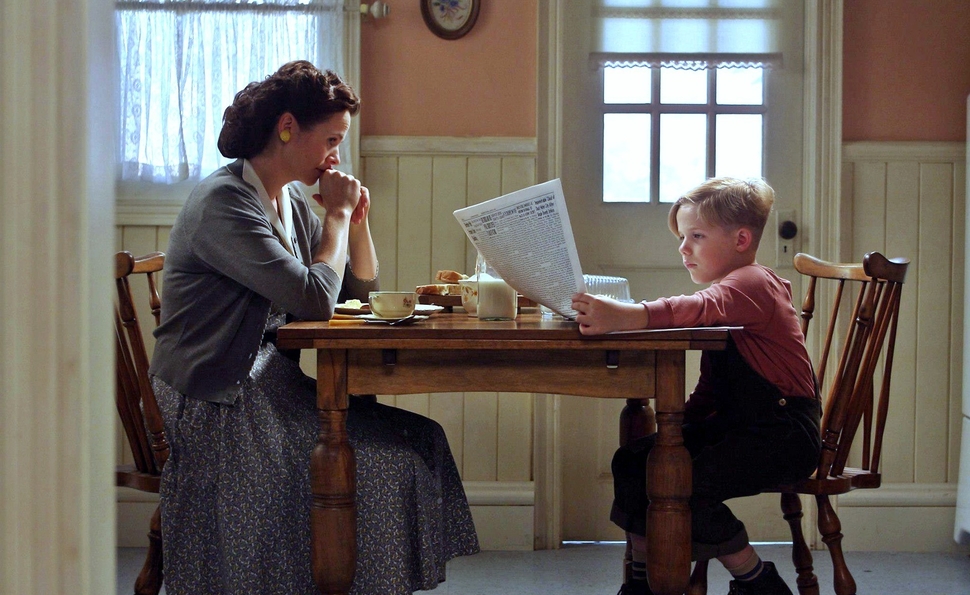 A film so sentimental it should only be projected on black velvet, Little Boy takes place in the small California coastal town of O’Hare, a place that looks like a computer re-creation of American life based on covers of The Saturday Evening Post. The movie house is always playing one classic film or another, the soda shop does brisk business, and the setting sun just intensifies the golden glow that hangs in the air at all times. It’s beautiful, but not without its troubles. World War II has taken many of its men and will soon take more, and the conflict has stirred up hatred among those left behind. And for 7-year-old Pepper Busbee (Jakob Salvati), there’s the matter of his tiny stature, which gets him dubbed “midget” by unkind classmates.

The film takes a firm stand against this cruelty, just as it will later take a firm stand against the town-wide shunning of Mr. Hashimoto (Cary-Hiroyuki Tagawa), a Japanese-American resident who’s returned after a stint in an internment camp. Such is the moral universe of Little Boy, which asks viewers to pat themselves on the back for not indulging in decades-old prejudices or supporting the bullying of a pint-sized kid. Pepper’s problems expand beyond being small for his age. When his brother London (David Henrie) gets classified 4F due to flat feet, their father James (Michael Rapaport) gets drafted into the army to fight in the Pacific. When Pepper joins his brother in mocking Hashimoto, a kindly priest (Tom Wilkinson) hands him a list of the Seven Corporal Works Of Mercy and adds the eighth item of becoming Hashimoto’s friend. The incentive: Maybe his acts of devotion will help get his father back safely from the war.

Another filmmaker might have found more potential in this set-up. Alejandro Gómez Monteverde, who also co-wrote the film, takes the easy route at all times. To check “visit the sick” off the list, Pepper drops by a hospital to share a comic book with a badly burned soldier. Who is this man? What is his story? Does he want some little kid bothering him as he recuperates? It doesn’t matter: He’s just a way station on Pepper’s journey to becoming a better person. So, for that matter, is Hashimoto. Tagawa, a veteran character actor, invests a lot of subtlety into the performance, but it can’t disguise the fact that he’s part of a long tradition of minority characters whose main purpose is to help white characters achieve their goals. Monteverde brings the same lack of subtlety to the filmmaking, too, crosscutting between Pepper being harassed by the son of his pediatrician (Kevin James) with shots of his father fighting in the Philippines, and cutting to the occasional cheap-looking fantasy sequence featuring samurai and pulp heroes. (That Salvati’s performance suggests the third runner-up at an audition for a Dennis The Menace reboot doesn’t help, either.)

Little Boy is the latest faith-based production from producer Mark Burnett and Roma Downey, and in some ways it takes the right approach, attempting to mix moral lessons into a narrative rather than hit audiences over the head with them. But the lessons are so pat that every moment in which Pepper makes a good moral choice feels like an act of self-congratulation. Here’s a good kid doing good things for an audience of good people. Who learns anything from that?