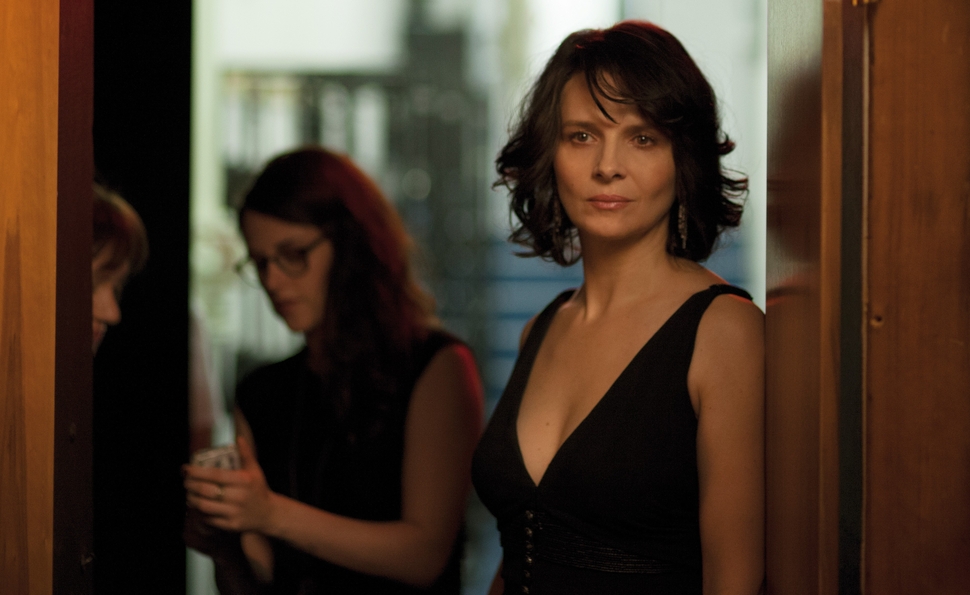 Olivier Assayas is among the world’s most cosmopolitan directors, someone who seems to see himself as a global citizen and whose films often seek to understand what happens when once-well-defined boundaries are more readily crossed. Sometimes those boundaries are corporate, as in multinational thrillers like 2002’s Demonlover and 2007’s Boarding Gate; sometimes they’re political, as in the great 2010 miniseries Carlos, about a roving terrorist in Europe and the Middle East; and sometimes they’re cultural, as in Assayas’ best work, 1996’s Irma Vep, which placed a star from Hong Kong’s thriving film industry (Maggie Cheung, as herself) in the middle of a calamitous French production. Assayas’ subtle, perceptive new film, Clouds Of Sils Maria, could be viewed as a companion piece to Irma Vep, dealing as it does with another veteran actress coming to terms with a rapidly changing scene. But where Irma Vep feels like a young man’s film, all spontaneity and critical provocation (not to mention Sonic Youth), Clouds Of Sils Maria is more like Ingmar Bergman, a two-hander about intimacy and performance that cannily reflects both Assayas’ age and the age of his star, Juliette Binoche.

That anything-goes quality of Irma Vep is missing in Clouds Of Sils Maria, but the film is equally wise about the difficulties of an actress who’s feeling alienated from her profession. For Cheung in Irma Vep, the language barrier accounts for some of her troubles, along with her bafflement over the dysfunctional state of the French movie business. For Binoche’s Maria Enders, the crisis comes more from within, as she questions her relevance as a movie star, her waning interest in where the craft of acting is going, and her doubts about returning to take the older role in the play that launched her career. Clouds Of Sils Maria is a great midlife crisis film, in other words, and, like Irma Vep, it’s also a great meta-commentary on contemporary moviemaking, with Assayas making keen observations about modern celebrity, screen-devouring blockbusters, Internet gossip culture, and the next generation of actresses, represented here by Kristen Stewart and Chloë Grace Moretz.

Already feeling unmoored after her mentor’s sudden death, Maria and her personal assistant Val (Stewart) decamp to a chalet in the Swiss Alps to prepare for a new staging of Maloja Snake, the (made-up) play that announced her as an exciting young actress decades earlier. (More meta-ness: Assayas wrote André Téchiné’s 1985 film Rendez-vous, which was one of Binoche’s earliest starring roles.) Now Maria is tackling the role of a middle-aged executive seduced and manipulated by her assistant, and the role of the assistant, once hers, has been given to Jo-Ann Ellis (Moretz), a promising actress with a tabloid history akin to Lindsay Lohan’s. Jo-Ann doesn’t show up until the final half-hour of Clouds Of Sils Maria, however. The meat of the film is Maria’s relationship with Val, who’s as cool and reserved as her boss is temperamental, but who struggles to deal with Maria’s dependence on her, which goes far beyond running lines and managing her appointments.

Life imitates art in Clouds Of Sils Maria, but the extent to which it does makes all the difference. The tension between Maria and Val so mirrors that of the two characters in Maloja Snake that it’s deliberately impossible to tell sometimes whether we’re watching the movie or the play-within-the-movie. At the same time, Assayas breaks away to show the two in other settings, whether they’re strategizing about meeting with a hot new director or going to see Jo-Ann in some dumb 3-D space adventure. (The post-movie conversation adds “the spit-take” to Binoche’s already considerable repertoire.) Assayas and Binoche have collaborated on a role with real-life resonances for a woman who once embodied the vitality and innocence of youth in The Unbearable Lightness Of Being and The Lovers On The Bridge, but has metamorphosed into a different kind of actress. But Stewart is every bit her equal in the tougher, less showy part of an assistant whose competence, insight, and devotion to her boss is often rewarded with neediness and low-level resentment. When Binoche and Stewart really get rolling, the gorgeous wide-open expanses of the Swiss Alps start to feel as confining and airless as the back of a limousine chased by paparazzi. Maria can’t get away from herself, and Val can’t get away from her, either.