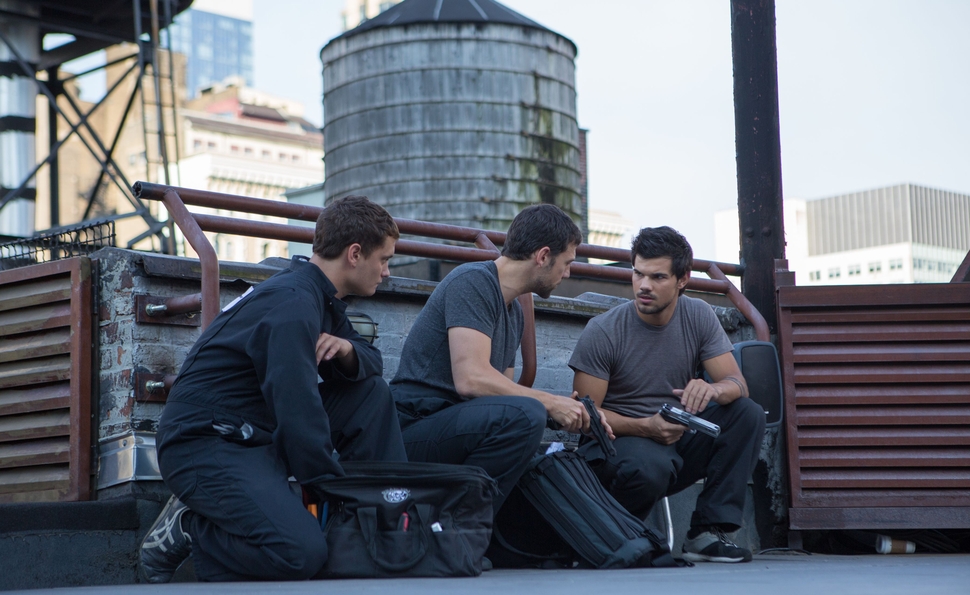 There’s something faintly inhuman about Taylor Lautner, who rose to superstardom as a wolf-boy keen on displaying his impressive abdominal muscles in the Twilight series, and has since been floundering around for a similarly lycanthropic-leaning vehicle ever since. Lautner would have fit perfectly in the stable of long-ago star-maker Henry Willson, who turned handsome, toothy Midwestern boys—sometimes bi, sometimes straight, and sometimes whatever the evening demanded—into Hollywood-approved slabs of beefcakes with names like Rock Hudson, Tab Hunter, and Rip Torn.

It’s easy to see Willson half-heartedly tossing Lautner into a kinetic little nothing of a movie like Tracers, content that no one will remember the movie enough to hold it against him. Tracers is a particularly flimsy excuse for a motion picture, a coming-of-age thriller that derives many of its storytelling beats from 1980s breakdancing movies, but with the dancing replaced by the mindless busyness of parkour.

Tracers casts Lautner as Cam, an orphan just barely eking out a living as a bicycle messenger in New York while trying to avoid the Chinese mob, to which he owes $15,000 for reasons that are first maddeningly enigmatic, then insultingly simple. The film attempts to sustain fake suspense by arbitrarily concealing why he owes the money, and why the parkour gang of cool, athletic kids he falls in with are in a similarly terrible bind. They’re all suspiciously tight-lipped about what they’re up to, until it’s narratively necessary for them to start talking.

Tracers opens with its protagonist flying high around the streets of New York, dodging cars and passersby as he navigates the urban jungle. Then one afternoon he crashes cute with Nikkie (Marie Avgeropoulos), a tomboy parkour enthusiast who ruins his bike, but is considerate and generous enough to buy him a new one. Cam is instantly smitten with Nikkie and the crazy nighttime world she represents. Suddenly, his bike can’t help but seem as lame and cumbersome as some frilly number with training wheels and pink streamers on the handlebars. He’s no longer fascinated by bikes: Now he’s all about parkour.

If nothing else, Tracers illustrates for the curious exactly how to become proficient at parkour. It’s like the old joke about how to get to Carnegie Hall: practice, practice, practice. So we’re treated to riveting montage sequences of a hungry, highly bruiseable Cam dashing around New York in a high-flying, flamboyant manner that emphasizes his speed, strength, and agility but also ensures that he falls down and hurts himself an awful lot.

After an appropriate amount of training, Cam decides to go pro, and even though his new pals aren’t too keen on telling him exactly what they’re doing, or how he’ll fit into their schemes, he nevertheless falls under the sway of Miller (Adam Rayner). Miller is kind of like a modern-day Fagin who has an army of street rats who are really good at moving about all stealth-like, doing his sinister bidding.

Miller doubles as something of a parkour Yoda. Like Nikkie, he encourages Cam not to see the obstacles in front of him, but rather the air and freedom just beyond. (Encourage him to see parkour in bullshit pseudo-spiritual terms, these mentors do.) Then it shockingly comes out that these shadowy ninja-like creatures who never talk about what they do and work for a much older, Fagin-like mentor are actually up to some pretty sinister endeavors. We also learn why Cam owes so much money, which dovetails into a finale that wraps everything up in a neat little bow.

There isn’t much to Tracers. It’s a nothing vehicle built around a fad and an actor who’s fairly useless when not playing a werewolf, a shark-boy, or at least someone allergic to shirts. But it goes about its idiotic business swiftly and efficiently, which is about all you can ask for from this manner of silliness. It never goes anywhere worthwhile, but at least it doesn’t take too long to get there.