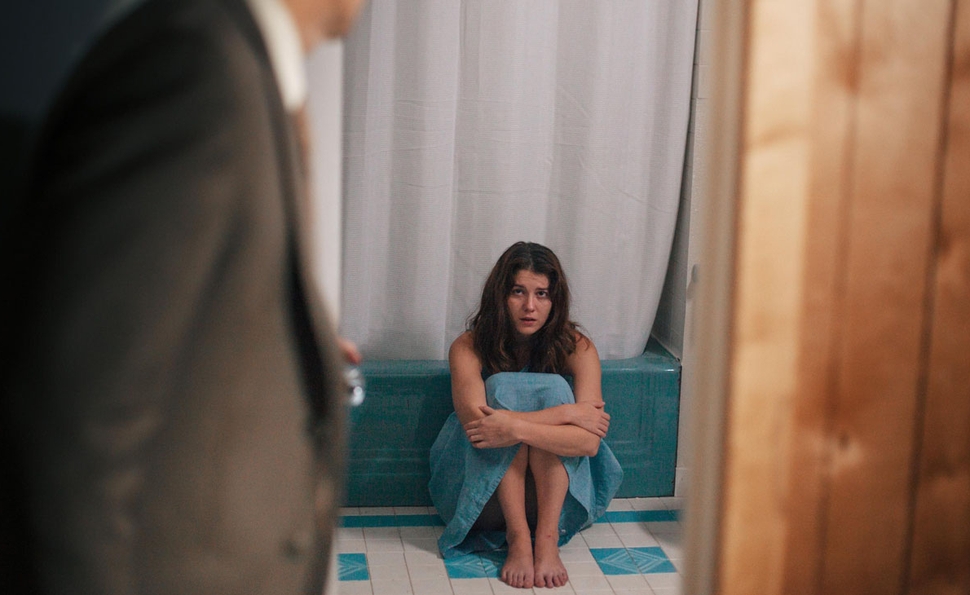 “What happened to you, Ansel?” a character asks Faults’ protagonist late in the film. Then he supplies the answer himself: “You let life walk all over you.” That about sums it up for Ansel Roth (Leland Orser), or it would, if not for the spark of defiance still in his eye even as he feels life’s heels on his back. Eating at the restaurant of a hotel where he’ll soon deliver a lecture on cults and mind control in the film’s opening scene, he attempts to pass off a voucher for a free meal. When the attempt fails, he still insists on finishing dinner as the manager attempts to throw him out. When he’s done with the food, he takes a fork to the pool of ketchup still on his plate. He’s on his way out, but he’s still going to grab what he can while he can.

The impressive first feature of writer-director Riley Stearns, Faults gives prolific character actor Orser a rare lead role, and he runs with the opportunity. In the film’s early scenes, Orser makes Ansel’s face a map of distress. He’s unable to hide that every interaction with another person is a kind of torture, and unwilling to give anyone who can’t help him out an extra second of his time. Once a renowned expert on cults, with a bestselling book and a TV show to back up his expertise, he’s now promoting a second, self-published book to small crowds. These sometimes include hostile attendees, unhappy with his past work.

So when a couple (Beth Grant and Chris Ellis) approach him about deprogramming their daughter Claire, he only takes the job out of desperation, knowing he’ll have to find some way to pay his soft-spoken, hard-hitting manager Terry (Jon Gries), who’s recently taken to employing an intimidating enforcer (Lance Reddick, doing a tough-to-trace accent) to remind him of his debt. Against his better judgment, Ansel kidnaps Claire (Mary Elizabeth Winstead, who’s married to Stearns) and sets about trying to undo the brainwashing of her new religion. That’s when his troubles really begin.

In the ensuing battle of wills between cult expert and cult member, it’s never clear who has the upper hand. Where Ansel can’t suppress his emotions, Claire always seems to be hiding something. Even when Claire is breaking down, Winstead’s assured, enigmatic performance keeps suggesting she has something to conceal. Ansel approaches the task confidently because in his experience, all cults are the same. But the way Claire talks about “Faults,” her new religion, suggests it’s a group of a sort he’s never encountered before, and untangling Claire from its grasp might exceed his abilities.

Stearns keeps the twists coming, but the duel between Claire and Ansel drives the film more than the particulars of the plot. Ansel has a hired goon keep Claire awake all night to break down her resistance, only to discover she doesn’t mind. When he starts trying to disabuse her of her beliefs, it’s never clear whether she’s an apt pupil, or putting him on. Even on this familiar turf, Ansel can’t find his footing. Claire’s serenity only reminds him of how happiness eludes him, and how deep in Terry’s thrall he is.

Set on the outskirts of some unnamed city in what appears to be the Carter-end of the 1970s, the film begins as an exercise in tense black humor, then slowly turns up the tension as the humor starts to bleed away. Stearns directs with a slow-burning intensity that becomes more unsettling the deeper Ansel goes into his task, and the more it becomes apparent he doesn’t have an easy way out. Faults doesn’t have one either, and while its finale is more shocking than satisfying, it still keeps with the tone of the film, which suggests that life walks over everyone, and wonders whether those who find ways to ignore this awful truth might not be better off.