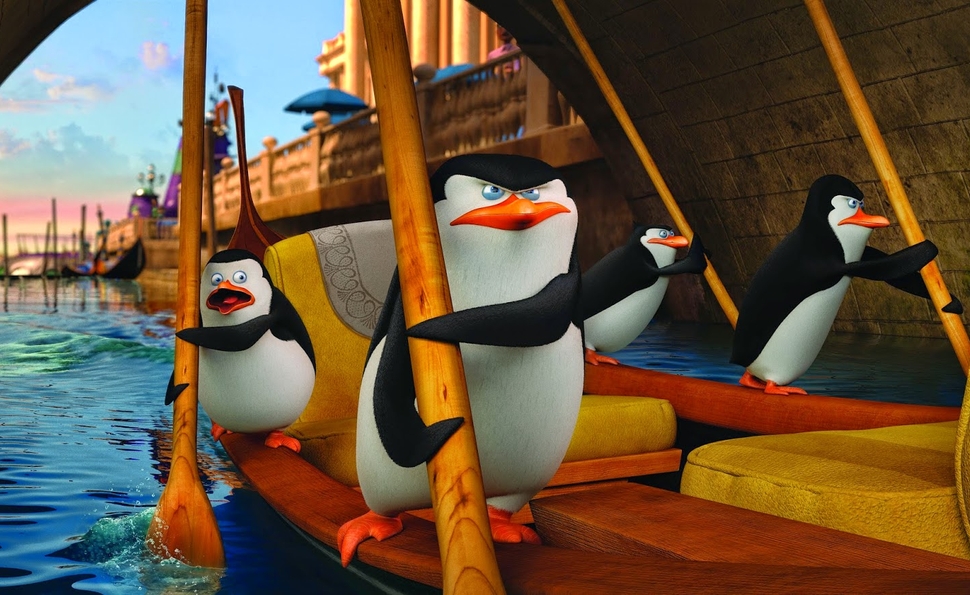 DreamWorks Animation has a history of hiring talented writers and comedians to punch up its scripts. Patton Oswalt’s album Werewolves And Lollipops includes a bit about his work inserting offscreen verbal gags into completed scenes on animated films, and luminaries such as Charlie Kaufman and Noah Baumbach have made contributions, too—the latter did enough to earn a co-writing credit on Madagascar 3: Europe’s Most Wanted. Excess jokiness has always been part of DreamWorks’ house style, along with boxy character designs and ripping off Pixar, but Penguins Of Madagascar, a Puss In Boots-style spinoff of characters from the lucrative franchise mothership, suggests the company has been going about its business in precisely the wrong way. What Penguins Of Madagascar needs is a roomful of ruthless editors to take jokes out of the script, particularly the ones aimed at pleasing the grown-ups in the audience. References to Super Bowl XIX and the French tax system don’t make a movie like this sophisticated—they just make it busier.

That grating freneticism also extends to the action, which connects one sequence to the next with a mechanical syncopation that’s more numbing than pleasurable. The penguins in question are side characters in the three Madagascar movies, but they’ve had their own Nickelodeon TV show since 2008. Here, the flightless quartet of adventurers take center ice for their first full-length feature. With a nod to March Of The Penguins—and a funny voice assist from Werner Herzog, whose views on nature are antithetical to March Of The Penguins—the film opens with a flashback where Skipper (the leader, voiced by Madagascar series co-creator Tom McGrath), Kowalski (the “brains” of the operation, voiced by Chris Miller), and Rico (the “loose cannon,” voice by Conrad Vernon) team up with young Private (Christopher Knights), who’s born with a British accent.

Yadda, yadda, yadda, we flash-forward to the gang infiltrating Fort Knox, not for the gold, but for the last remaining vending machine that stocks their beloved Cheese Dibbles. It turns out that the machine is a trap sprung by Dr. Octavius Brine, a.k.a. Dave (voiced by John Malkovich), a disgruntled octopus seeking revenge on all zoo penguins for taking attention away from him with their cuteness. To stop Dave’s evil plot, Skipper and the gang team up with North Wind, a high-tech team of intelligence agents led by a wolf they dub Classified (voiced by Benedict Cumberbatch).

There’s supposed to be a tension between the meticulous North Wind crew and the penguins, who have more of a smash-and-grab style, but really, all the animals have a wealth of James Bond gadgets at their disposal—and when those fail, their spectacular agility takes over. What’s missing from the film is their octopus-ness or penguin-osity, any but the faintest connection to their non-animated animal counterparts. Strapping jetpacks onto flightless birds is the type of glib irony that doesn’t augur in the film’s favor, not when they’re forced to regurgitate writers’-room one-liners while playing secret agents in a junior spy comedy. Though Malkovich was surely born to play a sinister octopus, his deliciously lacquered line-readings are overwhelmed by the breathless swirl of jokes and whiz-bang 3-D action. Like Dave’s plot to turn penguins into ugly creatures through a blast of his “Medusa serum,” Penguins Of Madagascar itself seems like a plot to train kids to like the blockbusters of tomorrow, priming them through sensory overload. Perhaps then, as sophisticates, they’ll appreciate the jab about how terrible the French tax system is for talking penguins.