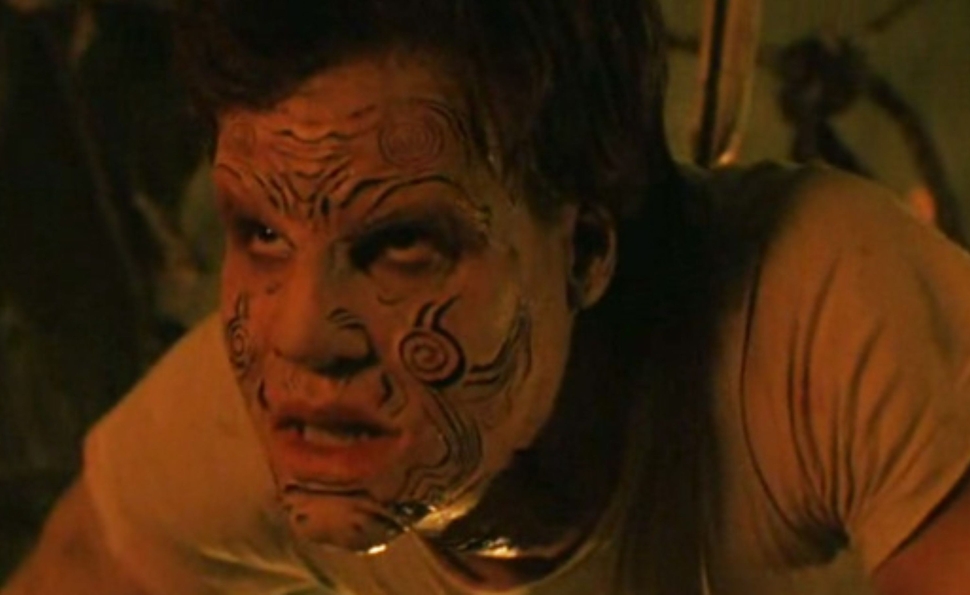 At the end of the Scream! Factory panel at the 2013 San Diego Comic-Con, the company made an unexpected announcement, saying that just 15 minutes before the panel started, Clive Barker and his producing partner Mark Miller had received word that a deal had been finalized to bring “The Cabal Cut” of Barker’s 1990 horror film Nightbreed to DVD and Blu-ray. The savvy horror fans in the room erupted. The story behind Barker’s follow-up to his 1987 hit Hellraiser is one of cult cinema’s great cautionary tales, all about a studio that didn’t get what Barker was going for, and ordered reshoots and cuts that the writer-director tried to accommodate—until a hopelessly compromised Nightbreed was finally released, disappointing Barker fans and baffling general audiences. But Nightbreed has also become one of the great success stories of fan culture, after recent festival screenings of Barker’s longer cut—cobbled together from a DVD of the theatrical release and a battered VHS copy of Barker’s work-print—revived interest in what Barker originally had in mind.

Scream! Factory’s Blu-ray doesn’t actually contain “The Cabal Cut,” which added previously excised footage to the theatrical version, in a form that approximated Barker’s novella Cabal. For the Scream! Factory release, Barker has supervised a full re-edit, removing only some of what Morgan Creek and 20th Century Fox mandated, replacing takes with ones he’d always liked better, and adding back a few deleted scenes in a way that still aims to preserves the brisker pace of the theatrical version. All told, the director’s cut restores 40 minutes of footage, but its running time is only 20 minutes longer. The intent of the Barker/Scream! Factory, though, is the same as “The Cabal Cut”: aiming to change the entire focus and meaning of Nightbreed.

Craig Sheffer stars in Nightbreed as Aaron Boone, a Calgary auto mechanic who’s haunted by dreams of a monster-ridden underground city called Midian. When Boone’s deranged therapist Dr. Decker (David Cronenberg) frames Boone for serial murders Decker himself committed, Boone flees to Midian, where after a rough introduction—and after getting gunned down by the police—he’s accepted as one of the “Nightbreed.” But Boone’s new life is complicated by his strongest tie to the old one: his girlfriend Lori (Anne Bobby), a nightclub singer who shows up in Midian looking for her lost love. Meanwhile, Decker keeps pursuing Boone and his new family, annoyed that his former patient won’t stay dead.

The version of Nightbreed that came and went quickly in 1990 was marketed as a slasher film—emphasizing Decker—and cut as an action picture, with about a third of the movie taken up by Decker leading a cadre of cops in an assault on Midian. In the current form, the big battle sequence is down to about a quarter of the film, with most of the added material fleshing out Boone and Lori’s relationship, while exploring the creatures and mythology of Midian. The longer Nightbreed establishes the universe that Boone is fighting to save. It also adds a wholly irrelevant but fun nightclub musical number from Lori, which is one of the many examples in the director’s cut of Barker showing some quirks and personality.

In either form, Nightbreed has issues. Barker built a magnificent world, but didn’t come up with a story worthy of it. The expansion of the Boone/Lori arc is significant, because it emphasizes the main dilemma in Nightbreed: whether this couple can find acceptance in a place that initially seems off-putting and inhospitable. But there’s still not a lot of plot here. Barker brings Boone to Midian, hints that he’s destined to save his new family of monsters, and then the grand monster/cop combat ensues. Because Nightbreed was originally made under the terms of a contract that allowed for a sequel—which never materialized—the film builds to the point where it feels like it’s about to become a genuine epic. And then the credits roll.

But given that Barker’s main intention with this project was to fetishize the creatures of the night—and to use their community as an analogue to outsider cultures of all kinds—the longer Nightbreed is definitely more satisfying. In the featurettes on Scream! Factory’s DVD, a member of the effects team says that the movie set a record for the most distinct monsters in a single movie, with more than 300 different designs. At its best, Nightbreed is like a living version of a coffee-table book, with each page filled with tentacled, quilled, or moon-faced monsters. The ultimate cut of Nightbreed would jettison the plot altogether, and would just be three hours of Boone and Lori descending into Midian, with Danny Elfman’s score playing wondrously behind them.

Scream! Factory is selling a “Director’s Cut” DVD/Blu-ray combo pack, and a “Limited Edition” Blu-ray box set that includes the theatrical cut and a bonus disc of with some of the “Cabal Cut” videotape scenes that didn’t make the new version, as well an assortment of behind-the-scenes featurettes. (The best of these extras is an interview with Mark Goldblatt, the editor Barker worked with after his first editor quit the project in protest of Morgan Creek and Fox’s demands. Understandably, Goldblatt’s a little defensive about the criticism of his cut.) From the main Blu-ray disc—the one available in both editions—the key additions are a disappointingly dry, Barker-free documentary about the making of the movie, and a much more rewarding commentary track from Barker and Miller, who wax poetic about the whole idea of a horror movie that lives with the monsters.