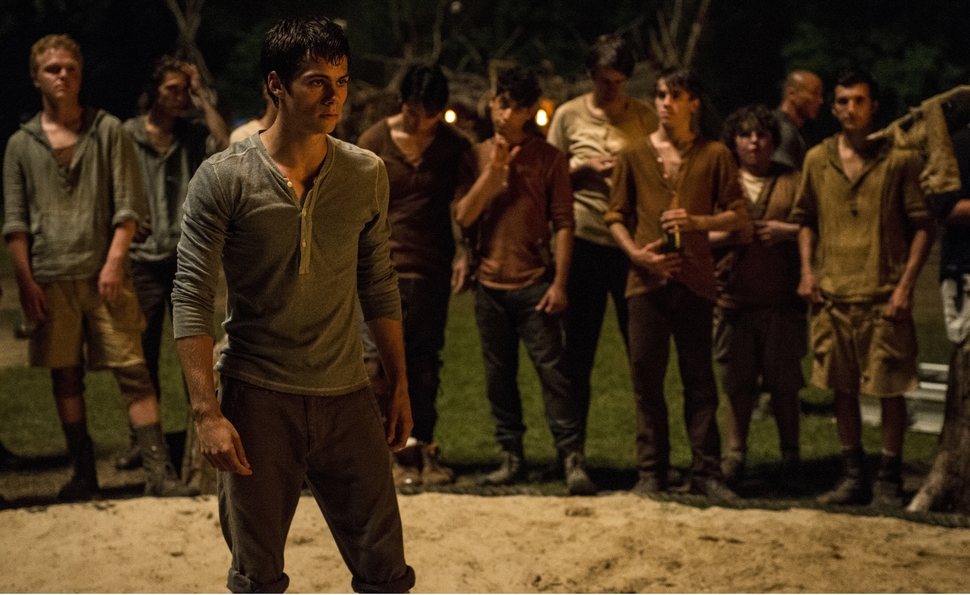 Like so many previous young-adult future-dystopia stories, The Maze Runner raises a lot of questions. There are the plot-significant ones viewers are supposed to ask, like the ones the characters are asking: “How did a group of twentysomething boys with no memories end up trapped together in a meadow surrounded by towering walls, and ringed by an immense maze? What terrifying monster lurks in the maze, killing everyone who encounters it? Why does a system that’s been static for three full years suddenly change radically when the protagonist arrives? Who set up this scenario, and what do they want?” And then there are the questions viewers probably aren’t supposed to ask, like, “Why does this film blatantly contradict itself? Who thought that final confrontation made any sense at all? How is any of this remotely possible, and why should we be invested in something so ridiculous?” Much like the societies of Divergent and The Hunger Games, The Maze Runner’s story only really works if viewers live in the moment and react to the characters’ immediate and intense fears and trials, rather than analyzing the situation that produced them.

But within that framework of immediate action, The Maze Runner is admirably propulsive. This adaptation of James Dashner’s bestselling YA novel was scripted by Noah Oppenheim, Grant Pierce Myers, and T.S. Nowlin—all first-timers to the screen, though Maze Runner’s production notes dutifully point out that they all have “a number of scripts in development.” They’re often smart about picking and choosing what works for film in Dashner’s novel, instead of clinging to the text where it would hamper them. In particular, they streamline the book’s interminable opening, in which newcomer Thomas (Dylan O’Brien, star of TV’s Teen Wolf) asks more frustrated questions than a secondary character on Lost, and gets fewer answers, with less reason. All the film’s early plot changes are directed at making the monsters more mysterious, the hidden maze-designers more menacing, and the whole story a little more logical. But that changes radically as the story progresses.

The film version gets all the necessary setup out of the way in a quick, natural introduction, free of voiceover or title-card exposition. When Thomas emerges from a freight elevator into a huge, tree-lined area called The Glade, traumatized and stripped of memory, he quickly learns he’s undergoing an initiation ritual like the dozens of other young men who arrived before him. (They’re teenagers in the book; the average age of the actors here is closer to 24.) Their leader, Alby (Aml Ameen, from The Butler), shows Thomas around and gives him the basics: The boys have built a small, hardy community full of handmade buildings and well-kept livestock, more Robinson Crusoe than Lord Of The Flies. They send runners out daily to explore the immense maze around them, looking for a way out, but the doors to the maze close at night, and monsters they call Grievers wander freely. No one has ever survived a night in the maze, or seen a Griever and lived to describe it.

Thomas, fulfilling his inevitable protagonist role, decides the rules aren’t for him, and starts doing things no one’s tried before. Things change rapidly, especially when for the first time, the freight elevator delivers a girl (Kaya Scodelario), who seems to recognize Thomas, and has a note in hand describing another momentous change to the situation the group has lived with for so long.

There’s a mildly interesting thread of social message running through Maze Runner, regarding how quickly and dangerously even a recently invented set of group mores can rapidly become hidebound tradition, to the point where even questioning them is taboo. The Glade-dwellers deal with the threat of change in radically different ways: Conservative, suspicious Gally (We’re The Millers’ Will Poulter) clings to the Glade’s established rules like a pagan priest, while maze-runner leader Minho (Ki Jong Lee) embraces Thomas as a leader, Alby’s second-in-command Newt (Thomas Brodie-Sangster, recently seen as Jojen on Game Of Thrones) hedges his bets and watches events develop, and the Glade’s youngest kid, Chuck (Blake Cooper), develops a full-on case of hero worship. Many of the confrontations between them are simply over whether it’s better to take action and risk their fragile safety in the hopes of freedom, or keep their heads down and enjoy whatever life they have.

But that’s a tenuous theme in a story that’s more concerned with thrills. To the film’s credit, it spends the needed time on the setup before kicking into high gear. Former special-effects contractor and first-time director Wes Ball studied Terrence Malick films as an inspiration, and while Maze Runner has none of Malick’s hushed-and-heady contemplation or sense of wonder, it does at least have a lush look and an overriding aura of dread and awe in the early going. By establishing some of the Glade’s castes, rituals, and personalities, the writers make an incredibly contrived scenario seem a little more tangible.

But once that high gear is engaged, the IQ and ambition drop precipitously. Suddenly Maze Runner becomes a standard-issue children’s-book fantasy film, on the order of Bridge To Terebithia or the recent run of Chronicles Of Narnia movies, with young people fighting CGI beasties through a series of videogame scenarios, and becoming little more than plasticine CGI figures themselves. And once the Creators’ plans become a little clearer, the entire story falls apart into rank nonsense, then ends with the a signoff that isn’t so much a cliffhanger as the kind of clumsy “Tune in for the next movie!” setup that’s become standard since Peter Jackson established the language for modern serial-film endings.

And by the end, again, viewers are supposed to be left with questions: “Where are the survivors going? What was the plan all along? What, above all, comes next for our intrepid heroes?” Instead, the question that most comes to mind is “Wait, really?” There are two more books in Dashner’s Maze Runner series (plus a prequel), so viewers may get those questions answered if this film makes Hunger Games money instead of The Giver money. But given how poorly this film lives up to the potential of its fleet, stylish first half, viewers might just be tempted to side with Gally in his desperation to stick to the Glade, where life at least made a little sense.