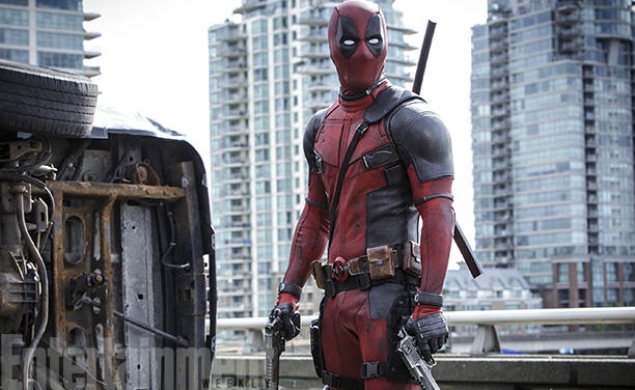 Deadpool Thing Of The Day: Deadpool has guns, gives zero fucks
Entertainment Weekly is giving us a first look at Deadpool and his guns, both of which will star in Deadpool, the upcoming Marvel movie about how Deadline forces all of its employees to take swimming lessons. The photo shows Deadpool holding two guns, standing in front of a turned-over car and a person who has presumably been shot or is about to be shot (both equally cool things). There’s a lot of PR nonsense within the piece, too, including this quote: “‘Deadpool is a hard R,’ assures producer Simon Kinberg. ‘It’s graphic. Nothing is taboo. You either commit to a truly outrageous boundary-pushing kind of movie or you don’t.’” Guys, in case it wasn’t clear, Deadpool doesn’t give a fuck. Deadpool hangs kids from basketball hoops by their underwear and doesn’t let them down until they rap the entirety of The Chronic from memory. Deadpool just strapped your grandmother to a mechanical bull and fed her nachos until she passed out. Deadpool falls asleep to the sounds of Trent Reznor throwing up into an empty KFC bucket on repeat.

How Far? Of The Day: All The Way, starring Melissa Leo
Melissa Leo will star as Claudia Alta Taylor “Lady Bird” Johnson in All The Way, HBO’s adaptation of Robert Schenkkan’s Tony-winning play about when LBJ lost his virginity. The movie, directed by Jay Roach and executive-produced by Steven Spielberg, will follow LBJ (Bryan Cranston) from “the moment the assassination of John F. Kennedy made Johnson the 36th president of the United States, and through a turbulent first year that included leveraging his power to pass Civil Rights legislation in Congress, up to his landslide re-election victory [and the loss of his virginity.]” Anthony Mackie, that guy you are making a sandwich for right now, will play Martin Luther King, Jr. in the film.

TV Adaptation Of The Day: CHiPs, starring Michael Pena and Dax Shepard
Crunch! That’s the sound of the CHiPs movie being given the green light and also the sound of Deadpool stomping on the wine glass at your Jewish wedding before you have the chance to, because it’s funny, suckers!! The film will star Michael Pena as Frank “Ponch” Poncherello and Dax Shephard as Don Baker, two California Highway Patrol motorcycle cops. Pena told Collider that he’s been prepping for the role over the past two weeks by “learning how to ride a motorcycle, rehearsing, and then working out” and also by “throwing up every day after workouts.” That is metal as fuck, Michael Pena. Are you sure you aren’t Deadpool?

Why? Of The Day: Michael Bay’s remaking The Birds, hired Dutch filmmaker Diederik Van Rooijen
In case you’ve scrubbed this haunting fact from your mind: Michael Bay’s Platinum Dunes is remaking Alfred Hitchcock’s The Birds, because birds are the original Transformers, if you think about it. Today brings news that Dutch filmmaker Diederik Van Rooijen (Daylight) is going to direct the movie, which has no plot details at this point, but who needs plots when you have just tons and tons of birds? This remake is going to be really great.

Heartwarming Love Story Of The Day: The Perfect Match
Terrence Jenkins, Paula Patton, Kali Hawk, and Joe Pantoliano will star in indie rom-com The Perfect Match, which “explores what happens when a successful playboy meets his match.” Here’s what happens (spoiler alert): They get married and eventually preside over the White House and help pass Civil Rights legislation in Congress. Later, Anthony Mackie is cast in a movie about them.

Fake Thing Of The Day: Creed fans want to change the name of the new Rocky movie
The Internet awoke this morning to news that Creed fans had started a petition to change the name of the new Rocky movie, which is titled With Arms Wide Open Sucks!!!!. The petition, hosted on Change.org, read, “The movie CREED about the son of Rocky Balboa’s deceased trainer’s son, is making it difficult, if not impossible, for the still-vital online Creed fanbase to exchange thoughts and discussion regarding band developments, song interpretation, rumors, non-erotic fanfiction, and deeper insights into the expanded Creed universe.” As of this afternoon, 48 people had signed it, 49 people were thinking about signing it, and 50 people were hospitalized after thinking too hard about Scott Stapp. But turns out the petition was actually started as a “hoax” by Nick Robinson,who clearly isn’t aware that only Deadpool is allowed to perpetrate mass hoaxes on the American media. Watch your grandma, Nick.