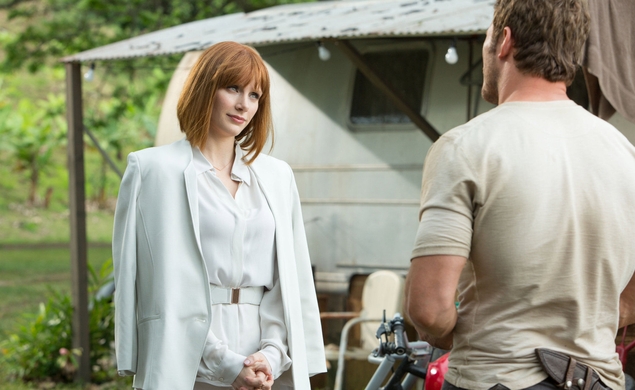 What Is Colin Trevorrow Doing Besides Being Rich As Hell Of The Day: Negotiating his next movie
Jurassic World’s Colin Trevorrow took a break from counting his money and commissioning a to-scale Neuschwanstein Castle replica out of fresh human teeth to start discussions with Focus Features about his next movie. The studio is desperately trying to acquire Book Of Henry, which has a script from Gregg Hurwitz but no plot details to speak of because fuck your plot details Colin Trevorrow is rich. Variety notes that “given how quickly his follow-up project has been set up, there’s a possibility that Trevorrow would have time to direct the next potential installment in the Jurassic World franchise.” Trevorrow had no comment because he was busy punching piles of caviar (like, as a workout).

Things That Got Some Titles Of The Day: Star Trek 3 and Michael Bay’s Benghazi film
Like most babies and all male genitalia (#yesallpenises), two upcoming films have been bequeathed with names today. Star Trek 3 will be called Star Trek Beyond, as in, “Wow, that trek to the stars was beyond. I can’t even.” It will hit theaters on July 8, 2016. Meanwhile, Michael Bay’s Benghazi film starring John Krasinski and Pablo Schreiber will be called Benghazi: Ben There, Ghazied That. Fine, it will actually be called 13 Hours: The Secret Soldiers of Benghazi. That movie will be released on January 15, 2016.

People Cast In A Movie Of The Day: John Heard, Cloris Leachman, and Jacinda Barrett in So B. It
John Heard, Cloris Leachman, and Jacinda Barrett have joined the cast of So B. It, which is what Michael Bay originally wanted to call 13 Hours: The Secret Soldier Of Benghazi, but it was already taken (a lot of caviar piles were punched that day). The film is an adaptation of Sarah Week’s YA novel about a 12-year-old girl (Talitha Bateman) who “decides to take a solo cross-country trip and leave the safety of her home life with her mentally challenged mother (Jessica Collins) and agoraphobic neighbor (Alfre Woodard).” As a future politician who firmly believes the driving age should be lowered to 12 and the drinking age lowered to 9 and 3/4, I think this seems safe.

Made-Up Type Of The Day: A “Michelle MacLaren type,” which somebody wants to direct Tomb Raider
Heroic Hollywood is reporting that the upcoming Tomb Raider reboot is seeking a female director, despite rumors yesterday that Tron’s Joseph Kosinski was in early talks. “Here is the kicker,” reads the piece, “they’re looking for a female director, a Michelle Maclaren [sic] type.” In other words, she must be blonde and have been fired from Wonder Woman due to creative differences; no brown-haireds or people who have not clashed publicly with large studios need apply. I don’t know who’s right or what HH’s source is here or what a Michelle MacLaren type actually is, but what I do know is that the butler I locked in the meat closet in the Tomb Raider practice level is definitely still in there.

Never Say Never Unless You Really Want To Say Never Of The Day: Robert Zemeckis says he will never sign off on a Back To The Future Remake
Robert Zemeckis, who is immortal in a very low-key way (like, don’t ask him about it, just trust me that it’s true), told the Daily Telegraph that he would only green-light a continuation of the Back To The Future films over his cold, dead body. “Oh, God no,” he said when asked if he’d consider signing off on a remake. “That can’t happen until both Bob and I are dead.” He grinned ominously, knowing he would never die, before continuing. “And then I’m sure they’ll do it, unless there’s a way our estates can stop it. I mean, to me, that’s outrageous. Especially since it’s a good movie. It’s like saying ‘Let’s remake Citizen Kane. Who are we going to get to play Kane?’ What folly, what insanity is that? Why would anyone do that?” Nobody tell Robert Zemeckis about money or caviar-punching or teeth castles. Preserve his innocence.