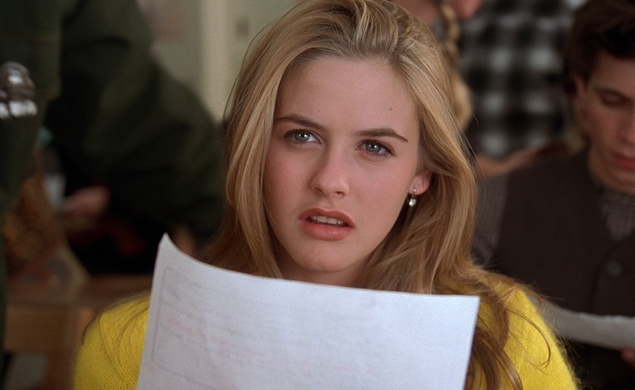 Best News I’ve Ever Heard In My Life Of The Day: There will be a Clueless musical
Here’s one for all the people out there who love Clueless but wish it had more songs about dying from routine liposuction: Amy Heckerling has confirmed that Clueless will become a Broadway musical, we hope not sporadically. “I’ve written what they call ‘the book,’ and it’s a jukebox musical,” the writer-director told Entertainment Tonight. But don’t pick our your premiere outfit or schedule that fatal fat-sucking appointment yet, guys; as Variety reports, “Excited fans should know that it might be a while before they can line up for tickets. Heckerling cautioned that the process of developing the musical is a slow one. ‘Everything goes so slowly,’ she said,” referring both to making Broadway musicals and how hard it is to drive when one is a virgin.

Live Person Of The Day: Aaron Eckhart, who will star in “high-concept action film” Live!
Aaron Eckhart is set to star in a new “high-concept action film” called Live! (Exclamation point very much not not mine, but a harbinger of high-quality, to be sure.) The “high concept” is threefold: 1) The film will take place in real-time, 2) It will be shot in real-time, and 3) Eckhart will definitely be alive (!) throughout the entirety of filming. The script “tracks disgraced cop Kyle Penny, on his hunt to rescue Police Commissioner Volk’s kidnapped daughter, trapped somewhere in the city with only 80 minutes to live (!).” Oh, I see, it’s more of an imperative “live (!)” “A deranged killer on his heels, Penny’s only hope is teaming with Ava Brooks, an ambitious young online reporter who films the wild chase live (!).” Real question: As an ambitious young online reporter, should I feel discouraged that I’ve never filmed a disgraced cop racing against the clock to save his boss’ almost-murdered kid?

Don’t Get Mad, Get Furious Thing Of The Day: Jason Statham is returning for Furious 8
Jason Statham has confirmed that he’ll be returning for Furious 8, the forthcoming biopic of the Jon & Kate Plus 8 kids. Despite the fact that he played villain Deckard Shaw, a man who went “toe-to-toe” with Vin Diesel and The Rock, Statham is being welcomed back to the franchise with open arms made of various car parts. As he told Access Hollywood, “We’re already talking about doing another one, Part 8. I’m a newcomer, I just got invited to the party in this last one, so it’s nice to know I’m going to be doing another.” That is nice to know, Jason Statham. It’s almost like you guys are family or something.

Fantastic Beast Of The Day: Ezra Miller, who may star in Fantastic Beasts And Where To Find Them
Ezra Miller—who will never not be Kevin in my eyes, sorry in advance forever, Ezra—is in talks to star in Warner Bros.’ upcoming Harry Potter spinoff, Fantastic Beasts And Where To Find Them (hint: on Wikipedia). Miller may play the role of Kredan, who is a “person with magical powers who encounters magizoologist Newt Scamander (Eddie Redmayne) when he stops in New York City on his travels to find and document magical creatures.” Katherine Waterston is already on board as a witch who encounters Newt; there’s so much encountering happening in this movie that I’m worried there won’t be any time for delightful magic!! Josh Gad and Michael Cera are also in talks to play the role of Jacob, Scamander’s rival.

Depressing Thing Of The Day: Chariots Of Fire sequel The Last Race
Joseph Fiennes has been cast as the lead in The Last Race, which “plays like an unofficial sequel to Chariots Of Fire,” which plays like an unofficial sequel to She’s All That. The Last Race will center on the Christian one, Eric Liddell, as he goes on with his life “after the events depicted in Chariots Of Fire, when he worked as a teacher and missionary in China.” Spoiler alert: This story does not end happily in any way; Liddell is interned by the Japanese and dies in prison camp of a brain tumor. Please refer back to the Clueless musical thing if you want to feel joy again.