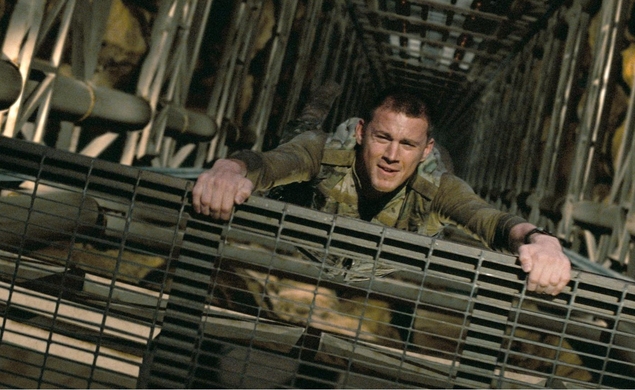 Important Celebrity Regret Of The Day: Channing Tatum hated G.I. Joe: The Rise Of Cobra
Channing Tatum, who may or may not be made entirely out of pepperoni, “fucking hated” G.I. Joe: The Rise Of Cobra as much as we did. In an interview with Howard Stern yesterday, Tatum admitted he only did the movie—a raunchy comedy about getting unwanted erections while arms-dealing—because of money and the sweet idiocy of youth. “Look, I’ll be honest. I fucking hate that movie. I hate that movie,” he said. “I was pushed into doing that movie … [After] Coach Carter, they signed me for a three-picture deal … And as a young [actor], you’re like, ‘Oh my god, that sounds amazing, I’m doing that!’” The lesson here? Don’t do anything, ever, because it will embarrass you later in life.

Making A Crime Thriller Of The Day: Josh Brolin, Maggie Gyllenhaal, and Olivia Munn will star in Three Seconds
Josh Brolin, Maggie Gyllenhaal, and Olivia Munn have joined the cast of Otto Bathurst’s crime thriller Three Seconds, a movie about how long it takes most people to start crying after turning on G.I. Joe: Rise Of The Cobra. Based on the bestseller by Anders Roslund and Borge Hellstrom, the movie follows “an ex-con, working undercover for the police, who is sent into a maximum-security prison to break a criminal organization’s stranglehold on amphetamine dealings, and then must escape on his own after he’s abandoned during the mission.” Luke Evans and David Oyelowo are starring in this one, too; Gyllenhaal will play “an FBI agent who has history with Evans,” Brolin will play her supervisor, and Munn will “do some of the emotional heavy-lifting” (she will carry him out of prison using only her heart) as Evans’ wife.

Worst Idea The World Has Ever Had Of The Day: Field trips, a horrendous tradition that will be taken to task in Miss Stevens
Lily Rabe, Timothee Chalamet, Lili Reinhart, Anthony Quintal, and Rob Huebel are set to star in Miss Stevens, which will mark Julia Hart’s directorial debut. Hopefully, the film will make a rock-solid case against the American tradition I hate the most: field trips. “When high school teacher Rachel Stevens (Rabe) chaperones three of her kids (Chalamet, Reinhart, Quintal) on a weekend field trip to a regional drama competition, nothing turns out the way she thought it would.” Of course it doesn’t, Rachel Stevens. Oh, the delusions you must labor under to believe bringing a group of rowdy children who aren’t your own to another state and letting them loose on the world will turn out exactly the way you thought it would. The film is apparently “about students, teachers, parents and children,” and “explores the comedy of living, the tragedy of loss, and everything we learn on the road between here and there.” We learn not to take field trips. That’s what we learn.

Second-Worst Idea The World Has Ever Had: Exploring uncharted wilderness totally alone, like in Gabriela Cowperthwaite’s The Search
Because she did not poke hard enough at our mortal souls with Blackfish, director Gabriela Cowperthwaite has signed on for her next project, The Search, an “adventure-thriller” that “centers on an expert tracker who battles his demons while on a journey to rescue his estranged older brother, who’s struggling to survive near-fatal wounds sustained while exploring the uncharted Northwest wilderness.” Now I’m all confused. Should we hang out in the wilderness or should we hang out at SeaWorld, Gabriela??

Bravest State in 1938 Of The Day: New Jersey, according to Brave New Jersey
Tony Hale, Heather Burns, Anna Camp, and Raymond J. Barry are set to star in Brave New Jersey, an indie comedy from Jody Lambert. The film will “tell the story of a small New Jersey town on the night of Orson Welles’ famed 1938 War of the Worlds radio broadcast, which led millions of listeners to believe the U.S. was being invaded by Martians.” This movie is clearly just a shameless ploy to get everybody to go on a field trip to 1938 New Jersey. It’s not happening, Jody.

Dystopian Nonsense Of The Day: Mr. And Mrs. Smith reality series
3 Ball Entertainment (the “minds” behind Extreme Weight Loss) have teamed with New Regency to develop and produce a reality game-competition version of Mr. And Mrs. Smith. As you struggle to find the will to keep living in a world that shelters that sentence, allow me to share the premise with you: “The show will feature married couples that compete in a high-octane, high-stakes game, with the producers offering no further details.” If you’re thinking, “Are these producers going to force these married couples to attempt to kill each other? Ha, no, that would be crazy,” remember that there was once a reality show called Kid Nation where 40 children were sent to New Mexico to create their own society and fend for themselves without adults and also The Bachelor.