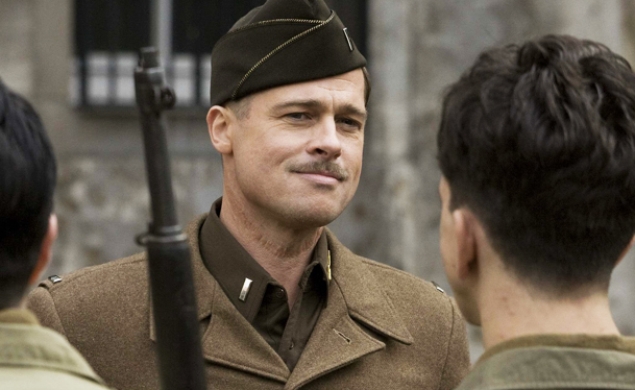 he Newsies is a regular feature that sees The Dissolve cheerfully adding to the awards glut by handing out imaginary awards related to the day’s movie news.

Money Is Hard Of The Day: Netflix paid $60 million, not $30 million for War Machine
Last week, we reported that Netflix paid $30 million for Brad Pitt’s military satire War Machine. That seemed like a lot of money to all of us, but we were wrong. It was actually no money at all and we are all so bad at money. THR reports that “Netflix chief content officer Ted Sarandos was willing to pay the $60 million the filmmakers wanted, according to a knowledgeable insider, debunking reports that pegged the price at about half that. ‘It's great for the specialty film business, since people might be more willing to see challenging, liberal-leaning material in the comfort of their own home [rather] than in a movie theater,’ says a source close to the deal. ‘More people might actually see the movie this way.’” Oh, I see what’s happening here, Ted Sarandos. Netflix: Making it easier for you to watch think-y stuff without getting embarrassed in public about it.

Christmas Fun Of The Day: Kay Cannon is adapting short-story collection Let It Snow
Universal will release Let It Snow, based on a short-story collection from YA Svengali John Green, Maureen Johnson, and Lauren Miracle about how much fun it is to do cocaine in the wintertime, just in time for Christmas 2016. Kay Cannon of Pitch Perfect fame is adapting the collection, which will “weave together three unexpected romances that take place over the course of one Christmas Eve.” So,  it’ll be sort of a Love Actually meets Paper Towns meets Blow (because the cocaine, remember?).

Meme Of The Day: Zookeepers re-creating scenes from Jurassic World
Zookeepers around the globe (maybe) have created a Jurassic World meme, which is why all those thousands of animals died yesterday, because nobody was tending to them. These keepers of the zoo have been re-creating Chris Pratt’s iconic scene where a bunch of dinosaurs close in around him, except using other animals, like penguins and chickens, who are famously great at taking direction. In an attempt to endure himself to the oft-stony zookeeper community, Chris Pratt picked up on the meme and tweeted about it, writing, “This is absolutely awesome!”

Sandra Bullock Ruins EVERYTHING Of The Day: The Blind Side dude thinks the movie messed up his career
Michael Oher, the NFL player whose story was told in The Blind Side, told ESPN he “feels that the film has negatively impacted his athletic career by putting extra scrutiny on him.” “I'm not trying to prove anything,” Oher said. “People look at me, and they take things away from me because of a movie. They don't really see the skills and the kind of player I am. That's why I get downgraded so much, because of something off the field.” In other words, Sandra Bullock has destroyed the dreams of yet another young man. When will she stop her reign of insouciant terror?

Morally Ambiguous Aliens Of The Day: The ones in Story Of Your Life, now starring Michael Stuhlbarg
Michael Stuhlbarg has signed on to star opposite Amy Adams and Jeremy Renner in the sci-fi film Story Of Your Life. The film, directed by Denis Villeneuve, “kicks off with aliens landing on Earth,” as most of our own lives did, then “the military then recruits a linguistic expert (Adams) to determine whether they come in peace or are a threat.” I’m gonna go ahead and say “Sandra Bullock-level threat.” Stuhlbarg will play the role of Agent Halpern, a “CIA agent focusing on international relations relating to the project.” Agent Halpern is probably gonna get alien-murdered.