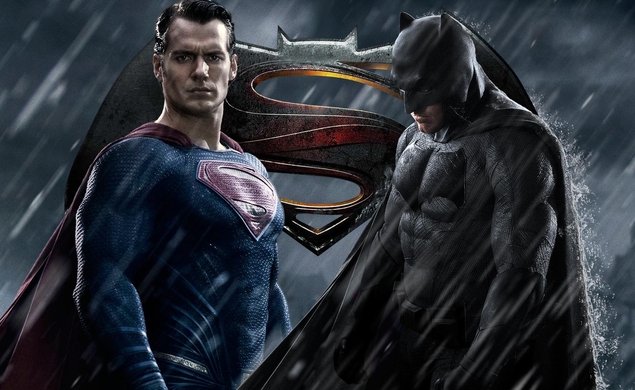 Meaningless Plot Synopsis Of The Day: Batman V. Superman
The official plot synopsis for Batman V. Superman was revealed today, and it is not, disappointingly, “the story of a child whose parents hated him and named him Batman Vladimir Superman.” Rather, it is this: “Fearing the actions of a god-like super hero left unchecked, Gotham City’s own formidable, forceful vigilante takes on Metropolis’s most revered, modern-day savior, while the world wrestles with what sort of hero it really needs. And with Batman and Superman at war with one another, a new threat quickly arises, putting mankind in greater danger than it’s ever known before.” So many words, so little information. Just like the official testimony of Batman Vladimir’s parents.

Hunt Or Be Hunted Of The Day: Josh Brolin and Danny McBride starring in The Legacy Of A Whitetail Deer Hunter
Josh Brolin and Danny McBride will star in The Legacy Of A Whitetail Deer Hunter. The logline for this one is “under wraps,” just like all of the whitetail deer that Danny McBride and Josh Brolin brutally murdered, but Jody Hill will direct from a script co-written with McBride and John Carcieri. Scott Rudin and Rough House will produce; the latter is made up of Hill, McBridge, and Carciere, all of whom are behind HBO’s excellent comedy series Eastbound & Down. They’re also behind a deer right now, shooting it dead.

Feel-Good Film Of The Day: Jason Banker’s next one, probably
Indie director Jason Banker—known for helming Toad Road, a horror movie and somehow not a level in Mario Kart, and Felt, which looks totally disturbing in the best possible way—is working on his next feature. It’s an untitled project set in the jungles of South America, and will be financed by Revolver Picture Company and Random Bench. Only great and cute things happen in South American jungles and Jason Banker’s films, so we can all assume this will be a musical comedy.

Who Will Beat Up Charlie Day? Of The Day: Ice Cube, in Fist Fight
Ice Cube and Charlie Day are in talks to star in Fist Fight, a comedy from Van Robichaux and Evan Susser. The movie will be “in the tone of the ’80s cult hit Three O’Clock High, but a grown-up version,” so, like, Seven O’Clock High, which is a more appropriate time for adults to get fucked up. Day will play a “mild-mannered English teacher who is put to the test when one of his colleagues (Ice Cube) who thinks he is trying to get him fired challenges him to a fistfight after school.” Ah, yes, a tale as old and poorly recycled as time itself. Who will win the great schoolyard fist fight? The mild-mannered lover of literature? Or “one of his colleagues”?

Oh, Haha, Sounds Cool, Weinsteins! Of The Day: The Weinsteins developing a sequel to Escape From Planet Earth
The Weinstein Company is developing a sequel to its animated comedy Escape From Planet Earth, which is a euphemism for the unholy fate of anyone who dare insult or question the Weinsteins. The original followed “a group of good-natured aliens that must escape from Area 51,” specifically Scorch Supernova, a “national hero from the planet Baab” who “finds his mission to free imprisoned aliens on Earth botched.” Which is ironic, because former writer-director Tony Leech and producer Brian Inerfeld, who were removed from the original production, claimed that the Weinstein Co. botched the movie through re-writes and budget cuts and sued them. Soon thereafter Leech and Inerfeld were shot into space.

#Sports Of The Day: Elisha Cuthbest has joined Goon: Last Of The Enforcers
Elisha Cuthbert, who is delightful, has joined the cast of Goon: Last Of The Enforcers, the sequel to the 2011 “sports comedy” starring Seann William Scott and Jay Baruchel. All sports are hilarious, so this is redundant. Baruchel is returning as co-writer, actor, and now, director; Liev Schreiber, Scott, and Allison Pill are reprising their original roles in a story that sees “the Halifax Highlanders reunite with a host of new players during a pro lockout.” Cuthbert will play the “outlandish sister” of Pill’s character. I will play a news editor who knows what a pro lockout is.