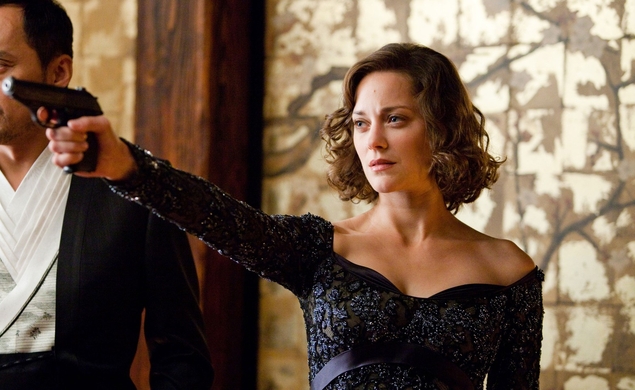 Period Spy Pic Of The Day: “Untitled period spy pic” starring Marion Cotillard and Brad Pitt
Marion Cotillard is in negotiations to co-star with Brad Pitt in Robert Zemeckis’ “untitled period spy pic” about a spy who gets her period and can’t spy good anymore. Steven Knight penned the script for the film, whose logline is “being kept under wraps” (the period puns write themselves, guys). The pairing of Pitt and Cotillard was “almost not meant to be,” as both are busy-as-hell divas, filming Assassin’s Creed and War Machine, respectively. Production for the film has moved from the fall to early 2016 to accommodate their schedules and their requests for all-taupe trailers filled with sea water and wallpapered with foie gras and suspended over the Grand Canyon.

Fake War Reports Of The Day: Eric Bana’s in Special Correspondents, now starring Vera Farmiga and America Ferrera
Vera Farmiga and America Ferrera have joined the cast of Ricky Gervais’ Netflix film Special Correspondents, alongside Gervais himself, Eric Bana, Kelly Macdonald, Kevin Pollack, Raul Castillo, and Benjamin Bratt. Bana stars in the film as a “struggling New York-based radio journalist whose arrogance and lavish lifestyle hinder his career.” Take out “struggling New York-based radio journalist” and “lavish lifestyle” and then you have the story of Ricky Gervais, amiright? Perhaps this is a biopic. “With his job on the line, he fakes front line war reports from his hideout above a Spanish restaurant in the city.” Oh, so this is more Brian Williams-y, then, if Brian Williams had had the decency to hide inside a Spanish restaurant for a while.

Not So Much Of The Day: Derek Connolly hadn’t seen the original Jurassic Parks before agreeing to write Jurassic World
Empire magazine has a new oral report on Jurassic World, which is not even out yet, can we live?  Screencrush points out one of the tidbits within: Screenwriter Derek Connolly had not even seen the original movies before he signed on to write the sequel. “I’m not sure if I should reveal this [ed note: you were correct; always listen to your gut], but I had never seen a Jurassic Park film until the day Colin called me,” said Connolly, beginning to choke as the long arm of Colin Trevorrow slowly encircled his neck. “I watched all three that afternoon for the first time in my life. The first one is amazing: It’s funny and the characters are great. The sequels, not so much.” That’s actually a great title for the next installment, I think—Not So Much: Jurassic Park. Gonna pitch it to Trevorrow as soon as he calms down.

Zombie Thing Of The Day: Zombie Prom, the movie
Michael J. Roth and Steve Longi, two men whom I know nothing about outside of the fact that they are probably alive, have acquired the film rights to the off-Broadway musical comedy Zombie Prom. The original story was written in the early 1990s, so it totally came before all the other zombie shit; it’s an “homage to the musicals and films of the 1950s, telling the story of a forbidden romance between the rebellious bad boy Jonny and the good girl Toffee who falls in love with him. After falling into a nuclear reactor, Jonny returns to his love as a zombie.” The most disturbing part of that summary is that it involves a woman named Toffee. Women are not food! (Unless you are a zombie. Then it’s fine.)

Retrofitter Of The Day: Quentin Tarantino, who is giving some theaters 70mm projectors for Hateful Eight
Quentin Tarantino is basically Santa Claus for cinephiles, albeit slightly less kinky than his chimney-fixated predecessor. At this weekend’s Cine Gear expo, it was announced that Tarantino has plans to retrofit at least 50 theaters around the country with 70mm projectors for screenings of Hateful Eight. “He really wants to get people back into theaters,” explained Panavision's VP of optical engineering Dan Sasaki, who presented test footage from the film at the expo. “Quentin wanted an epic Western, something that hasn’t been seen in forever, that would really wow people. [When he saw this test,] he started bouncing in his seat.” Just like Santa does when he sees a piping hot smokestack.

Okay. Of The Day: There will be a movie based on mobile game Cut The Rope
Somebody is making an Angry Birds movie and somebody else hired a Jurassic World screenwriter who grew up inside an XXL Croc clog without any access to movies or pop culture, so it follows that a third person is making a movie based on mobile game Cut The Rope. I’ve never played this mobile game, because I like to do IMPORTANT things on my phone like make 3-D Chinese avatars of my friends and family, but apparently it centers on a tiny green monster who really likes candy. (They should really have called it The Rachel Story lol!!!!) The movie version will be titled Om Nom, because real words are very passe in the mobile-gaming world; it will tell the story of “13-year-old Evan, a boy whose impulsiveness leads him to open a secret package containing a living scientific experiment—with mischevious intentions! Known only as Om Nom” oh sorry I really can’t keep typing this.