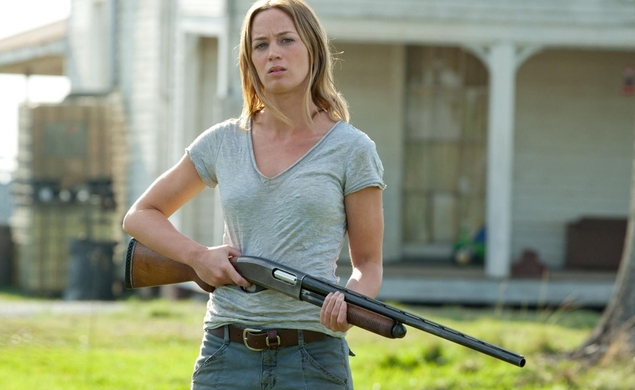 Good Reason To Mind Your Own Business Of The Day: The plot of The Girl On The Train, maybe starring Emily Blunt
Perpetual badass Emily Blunt is in talks to star in Tate Taylor’s The Girl On The Train, the very depressing spiritual sequel to Snakes On A Plane about a lonely, alcoholic divorcee who has a voyeurism problem. Blunt will play protagonist Rachel, who “fantasizes during her daily commute about the seemingly perfect couple who live in a house that her train passes every day, until she sees something shocking happen there one morning and becomes entangled in the mystery that unfolds.” A nice object lesson in not being a creep, I suppose. The movie is based on the best-selling book by Paula Hawkins, and Kate Mara may play another one of the “major female characters.”

Hidden Treasure Of The Day: The Alchemist, maybe directed by Laurence Fishburne and maybe starring Idris Elba, who knows?
The Weinstein Company is in talks with Laurence Fishburne and Idris Elbra to direct and star (respectively) in The Alchemist, their long-in-the-works adaptation of Paulo Coelho’s wildly popular novel. The book—which holds the world record for being the most translated work by a living author and is known for being a thing you put in your house to signify you are smart and thoughtful—centers on a “young Spaniard who embarks on a quest to find a hidden treasure within the Egyptian pyramids.” This adaptation’s been gestating since 1994, when Warner Bros. first bought the rights; it’s high time this shit gets going, because Idris Elba will only be fuckable by Hollywood standards for 30 more years.

Real Shit Of The Day: Chiraq, which has added some cast members
Some new dudes have joined the cast of Spike Lee’s Chiraq, a movie about Chicago’s gang violence that is pissing off everyone from Rahm Emanuel to some other, less-famous Chicago politicians. Dave Chappelle will now star in the film, as will Nick Cannon, Wesley Snipes, and D.B. Sweeney, who is reportedly playing Chicago’s mayor. The plot allegedly focuses on “a woman who strives to end gang warfare in the city” Lysistrata-style (a.k.a., withholding sex, which, how did we not think of this earlier?). Filming has already started in Chicago, and will continue through July 10; Chicago’s rampant and horrific violence will continue indefinitely.

None Of This Matters But Here We Go Of The Day: Dakota Johnson and Jamie Dornan may not star in a movie that doesn’t yet exist
Fifty Shades Of Grey stars Dakota Johnson and Jamie Dornan have not signed on for a potential spinoff film based on the wholly absurd forthcoming fourth book, Grey. Which is weird, because they really seemed to take pride in and enjoy the process of filming and promoting the first movie. If you missed the news on Monday, Grey will tell the exact same story as the first book, except from the perspective of whiny, needy billionaire Christian Grey. I, for one, am thrilled to be able to read more stories told from a male point of view. I’m also thrilled to report that all of this is total nonsense because nobody is even making a Grey movie yet.

International Collabo Of the Day: Bruce Willis, China
Bruce Willis is set to star in Chinese World War II epic The Bombing, because, as Yahoo puts it, “While American filmmakers continue to feast on China’s capital and rapidly growing audience, the Chinese are intent on using American partnerships to enhance the size and profile of their own film industry.” Sounds fun! After signing on for the film just last week, Willis flew to Shanghai on Tuesday (damn, son, that must have been a mighty check) to film “a dramatic re-creation of the Chinese population’s abiding endurance during the more than five years the Japan bombed the city of Chongqing, beginning in 1938.” Sources put the budget at $90 million; $89.9 million of that was in Bruce Willis’ check.