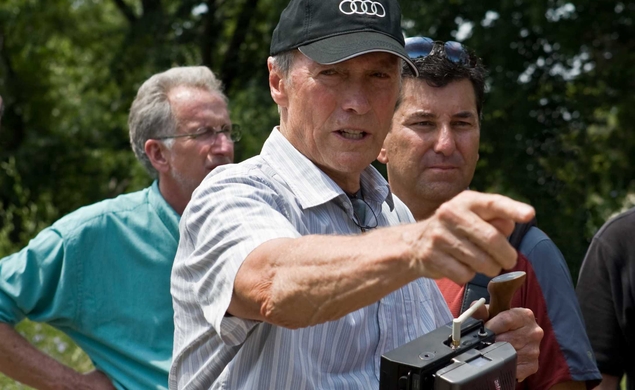 #American #Hero Of The Day: Sully, directed by Clint Eastwood
Warner Bros in talks to acquire the rights to Sully, the true story of heroic American pilot Chesley “Sully” Sullenberger. Clint Eastwood is attached to direct, because Clint Eastwood loves mounting biopics of American heroes. Based on the book by Sullenberger and Jeffrey Zaslow, the story “takes a closer look at the man who became a national hero after his plane began to malfunction shortly after takeoff and he was forced to take drastic measures in order to save all those on the plane.” Fear not, animal activists; all of the birds that jammed up Sully’s plane will be played by very lifelike baby dolls.

Bond, James Bond (TM) Of The Day: Who will own James Bond after November?
James Bond belongs to no one. I’m kidding, of course; he belongs to Sony. But not for long. The November 6 release of Spectre will “mark the end of a multi-picture pact between Metro-Goldwyn-Mayer and Sony” that’s encompassed Casino Royale, Quantum Of Solace, and Skyfall. A meta piece from Variety speculates that “insiders” (Variety) are speculating that the “close relationship between MGM chief Gary Barber and Warner Bros. CEO Kevin Tsujihara could result in the super-spy shifting addresses to the Burbank studio.” Sony Chairman Tim Rothman acknowledged that the fight for the right to Bond will be “fierce.” It may even be…deadly.

Non-Hacks Of The Day: Jehane Noujaim and Karim Amer, who will direct a doc about the Sony hack
Speaking of Sony and international espionage, the first film to address the Sony hack, outside of YouTube reaction vids we all made of ourselves reading Channing Tatum’s emails, is in the works. Spouses Jehane Noujaim and Karim Amer, the team behind 2013’s Oscar-nominated, Emmy-winning documentary The Square, are set to produce and direct the movie, a documentary that “explores the cyberattack, whose twists and turns captivated Hollywood late last year, culminating with Sony’s Amy Pascal stepping down from the co-chairman post under CEO Michael Lynton in February.” Apparently, the doc will reveal new “bombshells,” including “alternative theories about the hack’s culprit.” My pet theory is that it was Channing Tatum; your boy loves a well-executed prank with worldwide sociopolitical repercussions.

Please Make Up Your Fucking Minds Already Of The Day: Sony is still deciding on a Spider-Man director
Speaking of effing Sony, again, Sony has slightly narrowed down its directors for the Spider-Man reboot, starring one of six perpetually auditioning youths. “After a long vetting process,” which is the most massive understatement I’ve ever printed in this here column, “Sony Pictures and Marvel are zeroed in on the favorites, St. Vincent helmer Ted Melfi and Warm Bodies’ Jonathan Levine.” At least they’re down to two, which is a good sign. Oh, wait. “There is a new contender who was a surprise to me,” writes Deadline’s Mike Fleming, Jr, quite diplomatically. “He is Jon Watts, a top commercials guy who made his feature debut with Cop Car, a Kevin Bacon-starrer that debuted at Sundance.” Sure, why not. I am also in the running to direct Spider-Man.

I Totally Get What This Is Of The Day: Disney’s Playmation
Disney and Hasbro have unveiled a new…thing…called Playmation. Here is what it is not: a movie, a videogame, an athletic dalmatian. Here’s what it is? According to /Film, Playmation is “Disney’s attempt to tap into the active play market.” Tom Staggs, chief operating officer of the Walt Disney Company, calls the product “play for the 21st century,” a “physical play for a digital generation,” an “unique system of connected toys and wearables that combine the latest technology and Disney storytelling to inspire kids to run around and play using their imaginations.” Now that we all totally get what’s going on, here’s the trailer for this thing that is not a movie or a videogame, but involves Star Wars and The Avengers.

Sony, Part 400, Of The Day: Nikolaj Arcel may direct Sony’s The Dark Tower
Nikolaj Arcel may rewrite and direct The Dark Tower, the adaptation of the Stephen King novel about the gothic castle where Amy Pascal, Kevin Feige, and the Russo brothers go to make casting decisions and gnaw on petrified human scalps. The adaptation, which has been in various stages of development for as long as the Russo brothers have been alive (P.S. they’re immortal), is “set in a world woven with magic and revolving around the gunslinger Roland Deschain,” and Sony is behind it because Sony is behind everything. Even you. Don’t turn around.