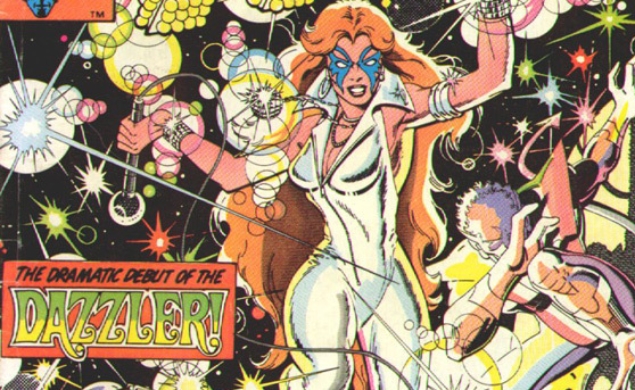 I have long been fascinated by Casablanca Records, the flamboyant 1970s entertainment dynamo led by the charismatic Neil Bogart that gave the world KISS, The Village People, Donna Summer, Parliament-Funkadelic, Can’t Stop The Music, and a whole lot of other tacky shit. So you can only imagine how excited I was to discover that during its late 1970s heyday, Casablanca collaborated with Marvel on the design and creation of a new, Casablanca-friendly superhero called Dazzler. I was even more intrigued to discover that while Casablanca bailed on the character during its long gestation, and a proposed film vehicle for the character starring Bo Derek never materialized (in that respect, it had much in common with the rest of her post-10 career, which similarly failed to materialize), the character has shown surprising staying power, headlining her own comic books and showing up in various Fantastic Four and The Avengers iterations.

Now, in an interview with EW, Simon Kinberg, one of the seven or so people who write every superhero movie, is teasing that Dazzler may show up as part of the 1980s color in the forthcoming superhero team-up movie X-Men: Apocalypse. When asked about the film’s Reagan-era setting, Kinberg answered, “That’s the era that I grew up in...The music, the fashion, the videogames: We really want to integrate all of that in the movie, and have it infuse the movie with a different vibe.” When asked if that vibe could include Dazzler, he responded, “Could happen...We’re certainly looking at mutants that would fit into the period.”

That could be good news for such similarly ’80s-centric superheroes as The Cube-Solver (can solve the Rubik’s Cube in less than a minute), the Fool-Pitier (dynamite comeback role for Mr. T), the Human Sound Effects Machine (paging Michael Winslow’s agent!), mutant crack dealer Just Say Yes (Nancy Reagan's worst nightmare), and, most nefariously, The Noid (mutant ability: ruining pizzas while they are being delivered).

The article in EW buries the lead by focusing on boring-ass questions about crossovers between The X-Men and The Avengers (snooze) and actress Rose Byrne returning as CIA officer and Professor X love interest Moira MacTaggert. There’s a lot of conjecture in the piece, in part because the answer to just about any question involving superhero movies is “could happen.” That “could happen” response that Kinberg gives regarding the possibility of Dazzler’s debut could also apply to the question, “Will Superman one day punch a super-intelligent dinosaur on screen while singing a Lady Gaga song?” It’s probably not likely, but it could happen, just as X-Men: Apocalypse could shock the world by featuring the Noid as its primary villain. He’s into a pizza-delivery apocalypse. Who’s to say he wouldn’t be into causing an apocalypse of a more general variety?