Michael Shannon in Before The Devil Knows You’re Dead 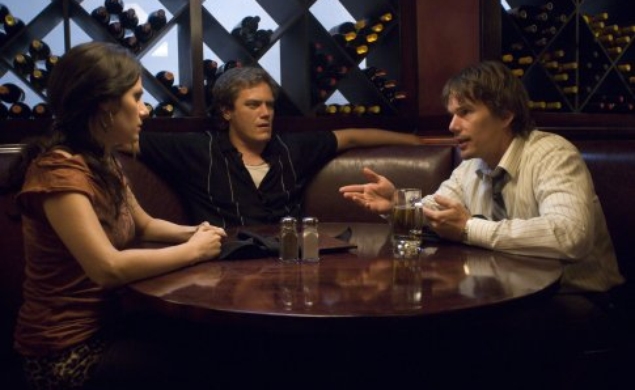 Staunch Characters pays tribute to great character actors by singling out a specific performance that illustrates their mastery.

Welcome to the first entry in Staunch Characters, a new column in honor of my very favorite kind of actor: Character actors, those prolific, sometimes funny-faced fixtures who make movies inherently more compelling through their presence. Staunch Characters is designed to single out the great character actors throughout time, your Warren Oateses and Christopher Walkens and Preston Sturges repertory players. But let’s start things out on a more contemporary note by singling out one of my favorite contemporary character actors, Michael Shannon.

I want to establish upfront that the performances that I write about here are not necessarily the actor’s best or most important performance, or the one that launched their careers. I’m singling out performances that illustrate what makes them remarkable. In Shannon’s case, that film is in 2007’s Before The Devil Knows You’re Dead.

Since his breakthrough role in 2006’s Bug, Shannon has specialized in dramatizing internal distress, playing characters at war with themselves as much as with the outside world. In Bug, Revolutionary Road, and Take Shelter, he was brilliant as men uniquely attuned to a strange inner frequency that, depending on the perspective, could be written off as insanity or romanticized as a form of prophecy.

Shannon’s massive frame, deep voice, penetrating eyes, and brooding intensity make him a natural to play villains. In Before The Devil Knows You’re Dead, he embodies a much more everyday form of villainy than the sort found in The Man Of Steel, where he played Zod. In Sidney Lumet’s beyond-bleak neo-noir, just about everyone makes life hard for Hank Hanson (Ethan Hawke), a well-meaning fuck-up bullied by his junkie older brother (Philip Seymour Hoffman) into going in with him on a robbery of the ultimate mom-and-pop jewelry store (in the sense that it is actually owned by their mother and father). But no one terrifies Hank as effectively as Shannon’s Dex, an figure out of Hank’s worst nightmares who sidles up to him in a restaurant of ominous suburban banality and presents himself as a representative for his sister, who lost the father of her baby when Hank was too chickenshit to go into the jewelry store and rob it himself.

Throughout the film, Hank’s scowling, disapproving family calls him a baby, and he never seems like more of a blubbering mass of nerves than when Shannon’s fairy-tale giant of a man is threatening to destroy what’s left of Hank’s life unless he gives him $10,000 of hush money. Shannon plays Dex as a creepy, condescending cat toying with a mouse because he knows that Hank’s life is his to take whenever he feels like it, and because it amuses Dex to watch him suffer. This makes him darkly comic as well as terrifying. He calls Hank “Chico” (and Hoffman’s character “Groucho”) because he can; he takes unseemly delight in bending Hank to his will, which isn’t difficult under the circumstances. Shannon has the innate vulnerability to play characters who are fatally, terminally human, but have the presence—physically and emotionally—to embody forces of nature. In Before The Devil Knows You’re Dead, certain doom faces Hank from all sides, but Dex is its most ominous manifestation. He cuts a Grim Reaper-like figure even if he ultimately ends up playing a much different role.

Shannon has that “Who is that guy?” magnetism that stands out even in a movie with Philip Seymour Hoffman, Albert Finney, Marisa Tomei, and Ethan Hawke, exhibiting a sense that his character had a rich and full life before he ever appeared onscreen. He makes such an indelible impression during his first appearance, it seems inevitable he will return. When he does an hour later, he has the majesty of a dictator holding court in an expensive hotel, despite just being a sketchy dude eating greasy pizza in a beat-up old armchair with his sister and her screaming baby in the next room. At the risk of spoiling a seven-year-old movie, Dex does not survive Before The Devil Knows You’re Dead. Much of the cast doesn’t, but Shannon makes every one of his moments onscreen—and his role maybe lasts five minutes—matter, which is a quality he has in common with every great character actor.