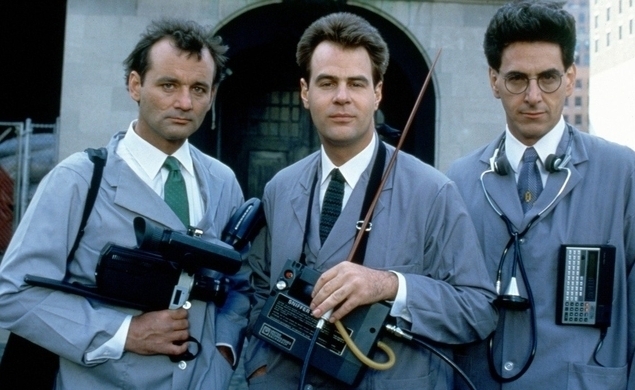 We’re still waiting on definitive word on Sony’s supposed sequel/remake/boondoggle to its beloved Ghostbusters franchise. Is it happening? Is it not happening? Is it happening with an all-female cast under the direction of Paul Feig? Will Bill Murray act as the film’s casting director? There is so much uncertainty in Spook Central these days.

The man who would presumably know the answers to these questions is Ghostbusters co-creator Dan Aykroyd. At a recent appearance in London to promote his vodka brand (I’m told it has a smooth finish of spores, molds, and fungus), Aykroyd offered no concrete details about the future of the series, but did suggest that Sony’s plans could go far beyond one simple reboot/threequel/disaster-in-the-making. His comments, via The Hollywood Reporter:

“[Ghostbusters is] not just another movie or another TV show, but what’s the totality of it? The whole mythology from the beginning of their lives, the end of their lives. Ghostbusters at nine years old, Ghostbusters in high school… The whole vehicle of Ghostbusters has to be rebuilt. That’s the ambitious thinking that’s going on now. Taking on the model of Marvel where we take all of the elements that are in this movie and we put them out there as different ideas.”

Yes, I can see it now. Ghostbusters Babies! Ghostbusters University! Ghostbusters Senior Citizen Home! The possibilities are literally endless (assuming they don’t have to be turned into actual, decent films).

Look, I love Ghostbusters as much as anyone on the planet whose name isn’t Dan Aykroyd. I even like Ghostbusters II! And even I don’t need a whole universe of Ghostbusters movies. Frankly, I don’t need a new Ghostbusters movie, period, but that’s another issue. With so much uncertainty after so much time, it’s imperative to focus on getting one movie right before anyone commits to making a whole series of terrible, reputation-destroying sequels and spinoffs. Which, of course, means they won’t. This is Hollywood, and let me tell you man, in this town? I have seen shit that would turn you white.