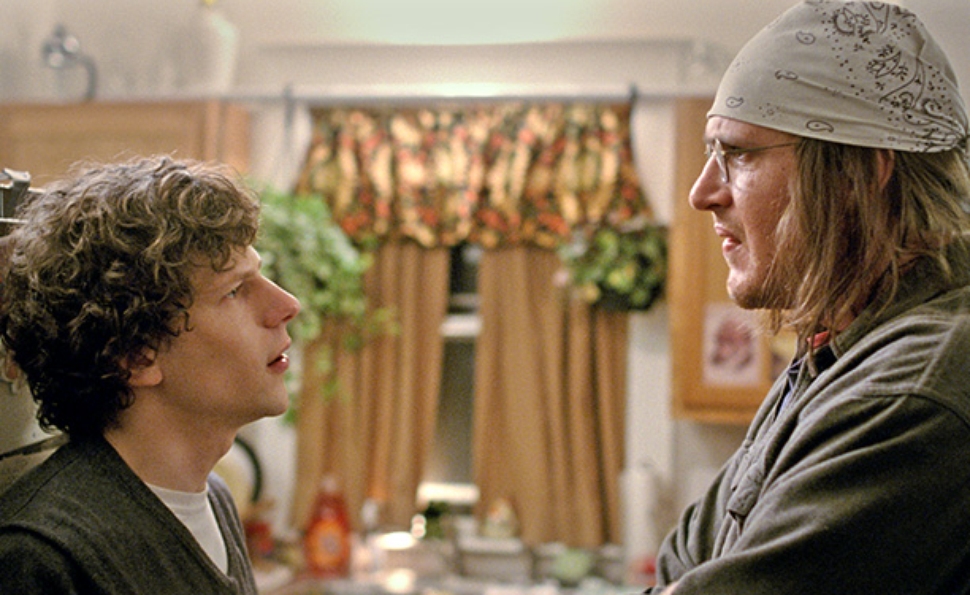 A series of pieces from and about the Sundance Film Festival.

On Saturday afternoon in Park City, I ducked into the New Frontier exhibition on Main Street, to check out what the Sundance Film Festival touts as examples of the latest evolutions in “screen culture.” Spread across two gallery spaces, this year’s New Frontier show features video installations and various immersive experiences, many of which are enhanced by earphones and virtual reality headsets. As I walked in, a Google employee (I presume) handed me a pair of cardboard goggles, with a phone inside and a special app switched on. I received no further instructions, so I stared straight ahead for a while, looking though the goggles at rubble-strewn streets, while through headphones I heard unidentified stomping and roars. Finally, I figured out that I needed to turn my head to see more, so I panned around the space, and looked up just in time to see a giant lizard-creature craning its neck down toward my face.

A couple of hours earlier, I watched a woman die of cancer on an ordinary movie screen. That was frighteningly realistic too.

James White is a prime example of how festival catalog-descriptions often undersell a movie. Reduced to a brief description, James White sounds pretty dire. It’s an impressionistic indie drama, about a spoiled, emotionally unstable New Yorker (played by Girls’ Christopher Abbot) approaching his 30s with no job and no life-plan, which leaves him wholly unprepared when his dad dies and his mom (Cynthia Nixon) sees her cancer return aggressively. These are things that Sundance doesn’t really need more of: arrested adolescent city-dwellers, name actors courting indie cred, and terminal illnesses.

But James White is outstanding, which in retrospect shouldn't be that surprising, since first-time feature writer-director Josh Mond is from the same collective of filmmakers responsible for Afterschool and Martha Marcy May Marlene. Mond's movie has a similarly immediate quality, focusing almost exclusively on James’ face as he spends his days getting intoxicated and picking fights, and his nights mopping his increasingly delirious mother’s brow.  This is a magnificently acted and nuanced character-sketch, often funnier and more nail-biting than the subject matter suggests. Both Mond and Abbot have such a rich understanding of James, a man who in an at-times-appalling way is using his pile-up of life crises as an excuse to be just the kind of selfish, lazy asshole he’d be on an ordinary day.

I don’t mean to imply that intense realism of James White is inherently superior to being dropped into the middle of a virtual kaiju attack. I’m only saying that great movies can freeze moments, characters, and ideas in ways that don’t need 3-D to get them across. Here’s another case-in-point: The Diary Of A Teenage Girl, another film by a first-time feature writer-director, Marielle Heller. Adapting cartoonist Phoebe Gloeckner’s semi-autobiographical graphic novel—about sexual and chemical experimentation in 1970s San Francisco—Heller embellishes the story with a few animated interludes, but for the most part her best special effect is the performance of young British actress Bel Powley, as precocious high schooler Minnie Goetze. The Diary Of A Teenage Girl suffers some from imposing a plot arc onto material that works better as a series of anecdotes about a libertine youth. Minnie’s inability to stop pursuing a relationship with her first lover—her mother’s boyfriend Monroe, played by Alexander Skarsgard—becomes increasingly maddening, and takes time away from the scenes of Minnie maturing through a dangerous process of trial and error. Still, Powell brings a combination of carnality and wide-eyed innocence to a character who treats sex, drugs, and even comics as pass-cards into the secret club of adults. The film is heartbreakingly specific about that particular period of adolescence when kids are mentally and physically primed to experiment with grown-up pleasures, but not emotionally ready.

The most personally resonant film I’ve seen at Sundance so far this year is director James Ponsoldt and screenwriter Donald Margulies’ The End Of The Tour, an adaptation of David Lipsky’s bestselling memoir Although Of Course You End Up Becoming Yourself: A Road Trip With David Foster Wallace. It’s been my impression that a lot of the expectations of and reactions to The End Of The Tour are tied to how viewers feel about Wallace’s work, and how they feel about the idea of sitcom star Jason Segel playing Wallace, in a film about a multi-day interview between the author and needy Rolling Stone reporter Lipsky (played by Jesse Eisenberg). Myself, I like Wallace's essays and reportage a lot, but I’m no super-fan, so I can’t speak to how well The End Of The Tour captures his spirit— aside from the focus on how Wallace struggled to live like an ordinary person delighted by ordinary pleasures, just as he often described in his writing. But I can say that the movie might be better served if everyone forgot about the famous person Segel’s playing. Because really, The End Of The Tour could be about any two writers of disparate accomplishment.

As was the case with his The Spectacular Now, Ponsoldt excels at capturing the flavor of a place—in this case the snowy Midwest where Wallace plied his trade—and the hard truths of personal interactions. A lot of journalists will feel a painful sting of identification as Eisenberg’s whiny, careerist David tries to get someone he admires to like him back. But just about anybody who's experienced the clumsy give-and-take of trying to make friends—on a blind date, at a party, at work, or wherever—should get what Ponsoldt is dramatizing here. With a bravely abrasive Eisenberg and a soulful, affable Segel anchoring the film, The End Of The Tour is both a finely honed look at a brief, strange relationship and an engaging dialectical inquiry into what life, art, and celebrity are all about.

A lot of critics have already called it one of this Sundance’s best. I can’t go that far, because this is more of a crowd-pleaser, and I prefer the rawness of James White. But I love that for a conversational film that touches on so many big topics, The End Of The Tour is ultimately about so something as small and specific as a socially awkward guy trying to impress someone that he knows is his superior. That taut, narrow through-line enhances the tension and stakes of every back-and-forth between these two men. Sometimes Lipsky and Wallace are simpatico, and all is well. But when the hulking Wallace loses his patience, he’s as intimidating as any CGI monster.

Also seen: I began and ended my Friday at Sundance with documentaries about cinema—both enjoyable to a point, but both ultimately failing to do proper justice to great stories. Brad Besser’s The Beaver Trilogy Part IV takes an overly gimmicky approach to the behind-the-scenes history and somewhat sad legacy of Trent Harris’ underground classic (for which Harris first spotlighted an eccentric Utah youngster in a docu-sketch and then recreated the footage with then-budding Hollywood stars Sean Penn and Crispin Glover). Both Harris and his film remain fascinating, but Besser tries to cover too much ground with Harris’ checkered career and the later life of “The Beaver Kid,” and ends up overworking the material, trying to shove everything into a comment on truth and fiction in cinema. Illinca Calugareanu’s Chuck Norris Vs. Communism is more polished, using talking-head interviews and detailed recreations to give an idea of what it was like to watch smuggled videotapes of American action movies in 1980s Romania. The film really gets at the fetishistic aspects of illicit aesthetic experiences. Even now, the people who gathered in living rooms for unlawful movie nights wax rhapsodic about the fuzzy picture and the quirky dubbing. But Calugareanu makes the same point over and over: that images of western wealth helped shatter The Iron Curtain. While The Beaver Trilogy Part IV is teeming with information, sloppily organized, Chuck Norris Vs. Communism takes about 30 minutes of movie and stretches it to 80.

Though it’s not as buzzed-about as the above films (and unlikely to become a critics’ darling here), Louise Osmond’s documentary Dark Horse is one of the best things I’ve seen during my first three days at Sundance. There’s nothing edgy or arty about it: It’s just a straightforward sports-doc, about what happened when a working class Welsh village pooled its money to breed and raise a race-horse. Osmond and her editors skillfully weave together reenactments, video from the actual races, and the colorful reminiscences of the locals, to tell a stirring and pertinent story about how UK’s landed gentry underestimated this unpedigreed horse, Dream Alliance. Dark Horse wrings maximum tension and uplift from each moment that Dream Alliance is on the track, putting the audience into the villagers’ heads thanks to a dense soundtrack and dynamic pacing—sometimes galloping, sometimes loping.

Lastly, while there’s no reason for me to write at length about It Follows after Mike covered at Cannes and Scott wrote about it at Toronto, I will say that neither of those gentlemen are wrong to call it one of the cleverest and scariest horror movies of recent years (in an era that has given us the greatness that is The Babadook and, according to Mike, The Witch). We seem to be entering something of a new era for horror, marked by relentless, well-written, character-driven films in which evil is inescapable. I'll leave it to the socio-politically minded out there to analyze what that means.

Tomorrow: Mike D’Angelo on the Noah Baumbach/Greta Gerwig film that Noel skipped yesterday (to see The Diary Of A Teenage Girl), plus a gambling movie from the directors of Sugar and Half Nelson.