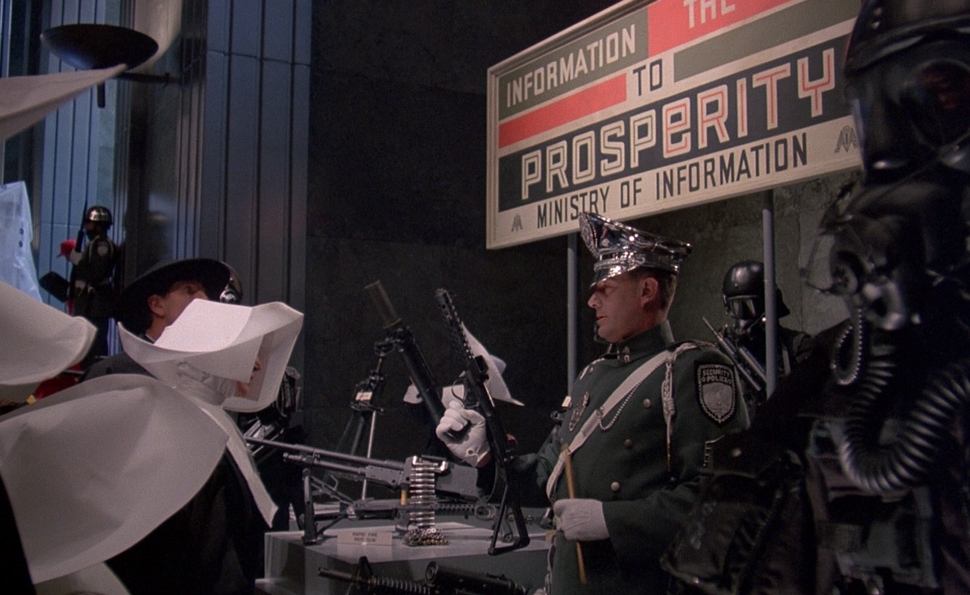 Duct to the future: The nightmare of Brazil never arrived, but it’s still resonant

Each week, The Dissolve designates a Movie Of The Week for staffers and readers to watch and discuss together. Feel free to pitch in or suggest your own discussion points.

On June 11, Slate and other sources published an item about a dramatic spike in Amazon.com sales of George Orwell’s dystopian 1949 novel Nineteen Eighty-Four. It wasn’t hard to figure out why. Mid-June marked the height—so far, at least—of revelations concerning the National Security Administration and its surveillance programs, and set many people thinking that the NSA slogan might as well read “Big Brother Is Watching You.” Exaggeration or not, it made sense that so many readers returned to Orwell, not because Nineteen Eighty-Four is prophetic in its particulars about life in the future (1984 or 2013) but because of its insights into how in an age of mass communication, governments—from totalitarian regimes to constitutional democracies—insinuate themselves into their citizens’ lives and thoughts.

To create a vision of a future gone wrong, Orwell drew details from the Soviet Union under Stalin, but also from British wartime propaganda, which suggested that nobody could be trusted when it came to state security, not even the sweetheart on the couch next to you. In the struggle between the state and the human heart, only one could truly be trusted.

There’s more than a little bit of Nineteen Eighty-Four in Terry Gilliam’s Brazil, which at one point had the title 1984 1/2, in a nod to the twin influences of Orwell and Federico Fellini. Anyone who’s found reading Orwell instructive of late might do well to turn next to Brazil, which at times plays like an analog prophecy of digital-age nightmares to come.

“If there’s a ray of hope in Brazil—and that’s a mighty “if”—it’s in Gilliam’s refusal to let the oppressors keep their masks on.”

“What do you believe is behind this recent increase in terrorist bombings?” an interviewer asks Brazil’s Deputy Minister Helpmann, following an explosive blast that destroys the window of a department store. “Bad sportsmanship,” Helpmann replies, elaborating about a “ruthless minority of people” who “just can’t stand seeing the other fellow win.” He might as well have added “They hate our freedoms,” George W. Bush’s oft-repeated, and no less vague, explanation of why al-Qaeda and other terrorist groups hate America, made in an address shortly after 9/11. Bush, to his credit, soon got more specific, but the soundbite lingered, and it could have been lifted from the playbook of Brazil’s Ministry Of Information. The broader and vaguer the accusation, the easier it is to believe.

Over the course of Brazil, viewers never learn what the terrorists want, or what their objections to the government are. It’s never even clear whether there are terrorists, or any subversive elements more malevolent than Harry Tuttle, the rogue HVAC repairman. The film shows only explosions, never the people instigating the explosions, who remain invisible and silent. There’s a hint in the swiftness of the government’s response that the state has no answers; the remarks could be canned to apply to any such incident. Or the government might be behind the attacks itself, killing its own citizens to create an environment of fear. “How many terrorists have you met?” Jill asks Sam at one point. He doesn’t have a good answer. Since 9/11, talk about false-flag attacks have multiplied. It’s the stuff of conspiracy theories, yet it isn’t hard to see how such theories thrive, growing fast and strong in an environment rich with vagueness, secrecy, and misinformation, whether in the never-named country of Brazil, or our own.

Brazil is set in motion by a typographical error—caused by a dead fly—that sends a police raid into the home of the hapless Archibald Buttle instead of their real target, Tuttle. It’s the sort of mix-up that’s only gotten easier to imagine in an era of identity theft, catfishing, and online confusion. (I’m assuming no one’s ever confused me with the West Virginia high-school principal who shares my name, who was arrested for smoking meth in his own office, but who knows?) More disturbing is another element of the Brazil universe that feels too close to one we lived in recently: The way torture has become an item of state business, and an accepted part of everyday life.

Pursuing the woman of his dreams, protagonist Sam Lowry (Jonathan Pryce) reluctantly accepts a promotion to Information Retrieval, an opportunity he’d previously turned down—at least in part, it’s implied, because he knows what goes on within its walls, and would prefer to remain within a less actively destructive wing of the bureaucracy. His friend Jack Lint (Michael Palin) has fewer qualms, and wears clothes that suggest he’s benefitted materially from his choices. Lint’s office captures the messy overlap between his job and the rest of his life, though it’s an overlap in which he seems comfortable living. Discarding a stained smock by a blood-soaked sink, he moves to a cozy couch near where his daughter plays with some toys. Outside, his secretary transcribes verbatim, down to the last shriek, the interrogation session happening in the next room. 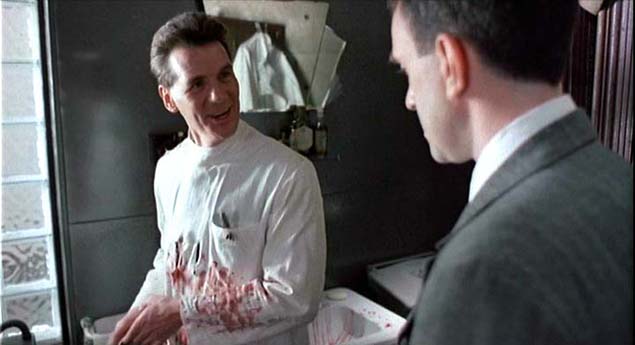 It’s messy, but Jack lives with it, just as the general populace has come to live with the understanding that Information Retrieval does what it does. It’s all in the name of security, which trumps any other concern. The ugly act of abusing flesh has become systematized and filed away, kept out of public view and evident only in the invoices distributed to the families of the tortured, because it takes money to keep everything running smoothly. It really needs no further justification than the one Jack gives Sam before beginning his interrogation, the last words Sam hears before his fantasy of escape consumes his mind: “This is a… professional relationship.”

If there’s a ray of hope in Brazil—and that’s a mighty “if”—it’s in Gilliam’s refusal to let the oppressors keep their masks on. Though it does him little good in the end, Sam knows it’s Jack beneath the mask. Earlier, in the rubble of a shopping-mall bombing, Sam does brief battle with police clad in terrifying stormtrooper uniforms. Swept up into a paddy wagon, he watches as they take off their helmets and complain about how they make their scalps itch, and produce “a great Niagara of perspiration.” No matter how hard the system tries, it can’t hide its humanity.

Yet it’s also that humanity that makes Brazil so terrifying, and what’s been done and will continue to be done in the name of national security so appalling. Speaking of the film’s architecture in his 1985 review of Brazil, Time’s Richard Corliss suggests readers “Imagine that Nazi Germany had colonized Britain after winning World War II.” But beyond the buildings, Brazil doesn’t really lend itself to that kind of alternate-history thinking. The imagery is fascist, but—beyond a brief glimpse of a group called “Consumers For Christ,” and the state’s frequent encouragement that its citizens keep shopping—its ideology remains unnamed and unclear. Nonetheless, there’s no sense that whatever beliefs the nation’s government lives by have been imposed from without. The nation has done this to itself. And as bleak a vision as Gilliam offers, part of what makes Brazil worth revisiting, frequently, is the unspoken questions beneath its surface: Is your country doing this to itself now? And if so, is it too late to stop?

Our Movie Of The Week discussion concludes here. Don’t miss Monday’s keynote on all the ways in which Brazil nearly didn’t happen, and Tuesday’s staff Forum on the film’s bleak humor and debatable ending. And next week, we’ll be discussing Terrence Malick’s Days Of Heaven, which serves as a strange sort of non-debut origin story for an idiosyncratic director.