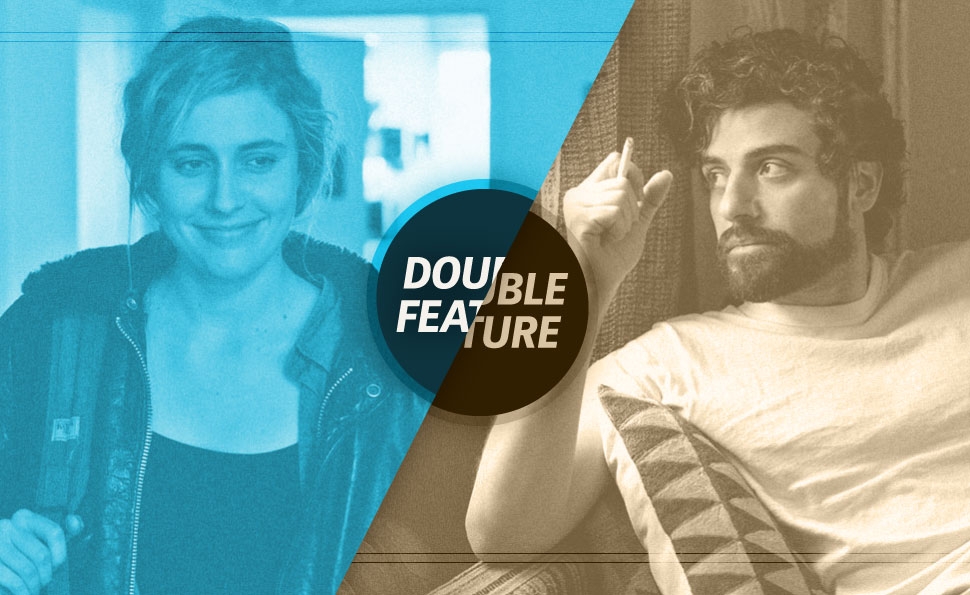 2013 DOUBLE FEATURE IS A SERIES OF COLUMNS EXAMINING SOME OF THE PAST YEAR’S MORE INTERESTING FILM PAIRINGS: MOVIES THAT COVER SIMILAR TOPICS OR THEMES, AND REFLECT ON EACH OTHER IN INTERESTING WAYS.

“Thanks for the couch I was a sorry mess last night.” Llewyn Davis (played by Oscar Isaac) writes this note at the start of Inside Llewyn Davis, apologizing to his occasional host family the Gorfeins, who have taken him in yet again when no one else will. But that note could just as easily have been written by Frances Halladay (Greta Gerwig) to any of the people she crashes with during the course of Frances Ha. Two of the best films released in 2013—the best two, according to my Top 15 list—were about New Yorkers struggling to make a go of it in the arts, finding themselves in a kind of limbo, shuffling from couch to couch as their resources dwindle. They’re sure of themselves, but unsure—or unwilling—to do what it takes to advance their careers. So they live lives marked by one stopgap measure after another, while continually getting bumped back to square one.

For reasons that can only be speculated upon, Noah Baumbach’s Frances Ha has been well-reviewed, but much less written about than the Coen brothers’ Inside Llewyn Davis—at least when it comes to the kind of essays and debates that usually trail in the wake of a critically acclaimed film. It may be because comedies about immature women from fairly comfortable backgrounds are so common in the indie film world that they’re practically a subgenre. It may be because the predominately male critics corps generally takes young women’s problems less seriously than young men’s problems—especially when the women in question seem privileged enough to be thriving more and complaining less. Or it may be because Baumbach and Gerwig make movies that are intentionally ragged, reflecting life as it’s lived, while wearing their meaning on the surface, while the Coens make movies that are abstracted and allusive, demanding interpretation.

Part of Inside Llewyn Davis’ appeal is the process of sorting through it, considering how its recurring motifs and cultural references explore Llewyn’s life, and how the movie fits into the Coens’ larger filmography. What does it mean that Llewyn chases a cat, the way Tom in Miller’s Crossing dreams about chasing a hat? Is the cat’s name, Ulysses, a nod to the Coens’ Homerian O Brother, Where Art Thou? When Mitch Gorfein’s secretary mishears “Llewyn has the cat” as “Llewyn is the cat,” is that a clue to who Llewyn is: aloof and on the go, scampering back to the same locations like the lost little critters in The Incredible Journey? Or does the cat represent the music business, slipping past Llewyn while the more personable folksinger Troy Nelson sits calmly with the cat purring on his lap, “peaceful” and “contented”? (Even when Llewyn catches the cat, it’s the wrong cat, lacking a scrotum. That has to be a metaphor for something.)

And then there’s the recurrence of shit throughout Inside Llewyn Davis—figuratively and literally. At the start of the film, Llewyn’s occasional lover Jean (Carey Mulligan) complains that everything he touches “turns to shit.” Later, Llewyn shares a ride to Chicago with a surly jazz musician named Roland (John Goodman) who hears that Llewyn’s name is Welsh and tells a story about getting diarrhea from a dish of Welsh rarebit. Even when Llewyn sings a beautiful ballad to his ailing father—“touching” him—his dad soils himself. Meanwhile, one of the main plot-drivers in Inside Llewyn Davis involves Llewyn’s efforts to get enough money to pay for Jean’s abortion—money that comes, ironically, from Jean’s boyfriend Jim (Justin Timberlake), who may actually be the father of Jean’s child. Llewyn is foul and corrosive. It’s possible to spend a happy afternoon poring over Inside Llewyn Davis scene-by-scene, charting all the ways the Coens define their hero through his failings. 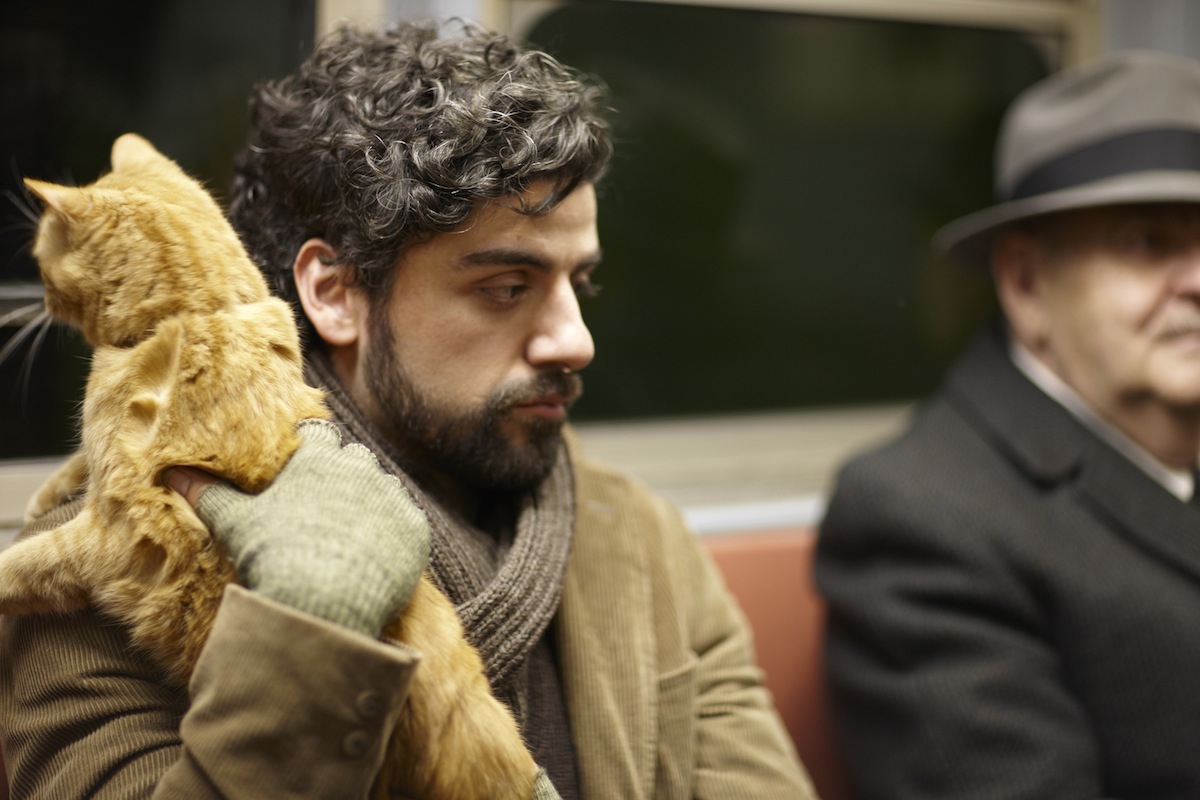 But just because Frances Ha doesn’t invite the same kind of analysis doesn’t make it a lesser film. If anything, what Baumbach and Gerwig (who co-wrote the script) achieve with Frances Ha is more impressive, because they pull a cohesive picture out of what at least feels unstructured and off-the-cuff. Baumbach follows Gerwig’s Frances from New York City to California (for a holiday visit with her parents), to Paris (for an impromptu vacation), and to upstate New York (where Frances takes a job at her old college), and at times it seems like Baumbach is staging entire scenes just for the purpose of excerpting one good three-second Gerwig line. But those little snippets of funny dialogue accumulate into a character, similar to the way the Coens construct Llewyn through recurring images and public scorn. When Baumbach cuts to Frances looking into a frying pan and saying, “I tried to make a frittata, but it’s really more of a scramble,” and then immediately cuts away, it’s a quick, amusing little gag, but it also speaks to who Frances is: a woman who begins with big plans, and ends up with a mess.

As with Llewyn Davis’ anti-Midas touch, Frances gets tagged as a pariah—or at least “undateable”—by her temporary roommate Benji (Michael Zegen). The difference (besides Benji’s obvious crush on Frances, very much unlike Jean’s bitterness toward Llewyn) is that Frances turns her haplessness into a big joke. Llewyn is defensive about being an asshole, tying his snarliness to his artistic integrity. Frances jokes, “I’m not a real person yet,” and excuses her irresponsibility by suggesting that she’s a hilarious, beloved character to her circle of friends. Which she is—to an extent. But Frances’ mistake is that she assumes everyone in her generation is at the same “still figuring it out” level, because that’s how they all behave when they’re hanging out together at parties. In truth, her closest chums have real jobs, and relationships that are moving toward marriage, while Frances is still holding out hope that her irregular gig as a teacher/understudy at a dance company will develop into a career as a world-famous dancer who gets profiled in all the classy New York magazines. (Meanwhile, whenever anyone complains that Frances is too messy, she reflexively lies, “I’m busy!”)

There are further connections between Inside Llewyn Davis and Frances Ha. Frances breaks up with her boyfriend at the start of her movie because he wants them to share ownership of a cat. Both films feature Adam Driver in bit parts. Both Llewyn and Frances receive an unexpected windfall: a well-paying recording session for the former, a tax refund for the latter. Both are asked to perform at a party, with Llewyn getting pissy about being asked to sing, while Frances sheepishly but happily does a few pirouettes. Both refuse to push too hard for what they want. When Llewyn performs for big-shot Chicago club owner/promoter Bud Grossman (F. Murray Abraham), Grossman listens impassively, then says, “I don’t see a lot of money here,” to which Llewyn shrugs, “So that’s it.” When Frances asks the director of her dance company for more work and gets the brush-off, she chirps, “I’m just proud of myself for asking.” 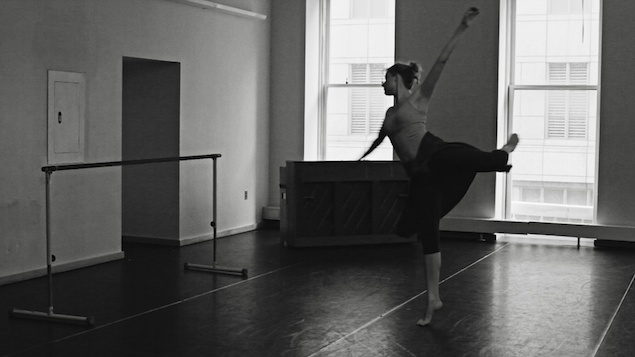 The movies move toward different conclusions. Both Llewyn and Frances are in a kind of stasis for most of their movies—with Frances unable even to leave a room, no matter how many times she says, “I should go”—but in the end, Frances has a breakthrough when she takes a clerical job, starts working on her own choreography, and gets her own apartment. Inside Llewyn Davis, on the other hand, literally ends where it begins, with Llewyn lying bruised and beaten in an alley. Roland makes fun of Llewyn’s profession because unlike jazz musicians, who “play all the notes,” folksingers only use a few chords; Jean dismisses Llewyn’s troubles, saying, “All the shit keeps happening to you… you want it to.” Llewyn doesn’t learn any lessons or make any changes at the end of Inside Llewyn Davis, because there’s nothing anyone can say about Llewyn that he doesn’t already know. He’s stubbornly limited.

Because of that, some people find Inside Llewyn Davis hard to connect to emotionally, as much as they enjoy thinking about it. (My wife falls in that category: She liked Inside Llewyn Davis, but loved Frances Ha.) But just as it’s a mistake to undervalue Frances Ha as a complex piece of cinema, Inside Llewyn Davis is far from cold. About halfway through the film, when it’s revealed that Llewyn’s former partner Mikey killed himself, it changes the meaning of what happened earlier in the story, and adds a stronger tone of melancholy to what comes after. Llewyn is a man who’s lost something bigger than a cat.

And I’m not just talking about Mikey. Inside Llewyn Davis reminds me a lot of what might be my favorite Coen brothers movie, A Serious Man, in that both are about a person surrounded by colleagues and relatives who seem to have a more innate understanding of how the world works. That’s true of Frances, too. Early in Frances Ha, when she’s about to lose her apartment, she spends an evening with Benji and his friend Lev (Driver), who offer her a place to stay (where she can smoke indoors!) and an audience for her quirks. They even suggest that she could do some work with a friend of theirs who makes music videos. “You guys are like magic!” Frances enthuses. But they aren’t, really. As soon as Frances can’t come up with her share of the rent, she’s booted from fantasyland.

Inside Llewyn Davis and Frances Ha are linked by more than just their couch-surfing protagonists. In both films, there’s a strong sense of exclusion. For a time, prior to the opening credits, both Llewyn and Francis were part of a close community that shared the same rituals and ideals. Then the world changed into a place inhospitable to a man who knows three chords, and a woman who can’t leave a room.