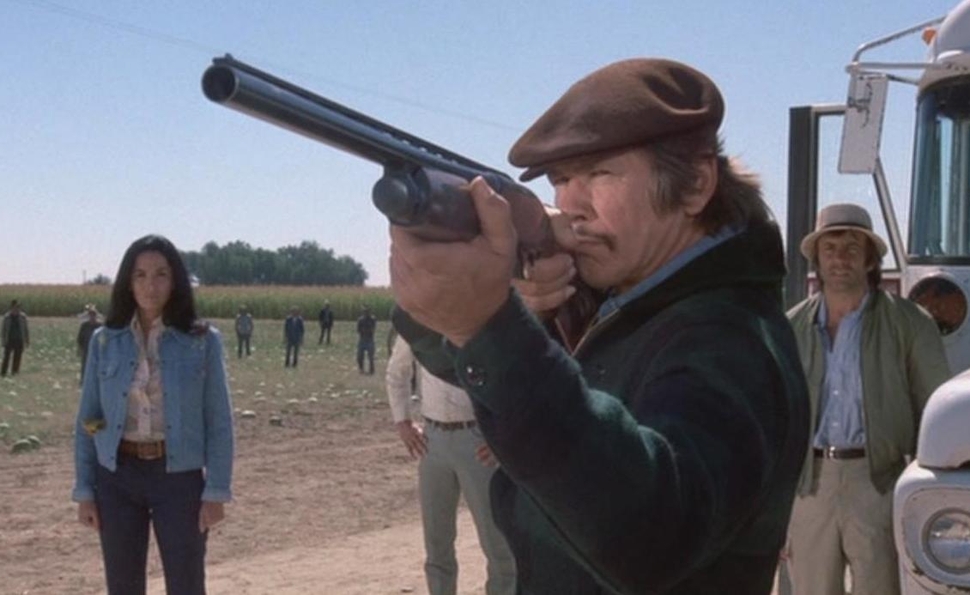 Charles Bronson had a slow but steady rise in Hollywood, starting out as a bit player in the 1950s, graduating to character-actor status in the 1960s, then becoming a leading man in low-budget genre pictures in the 1970s. Bronson was 53 when he had his first really big hit as the star of a major motion picture, with the controversial revenge thriller Death Wish. And one of the reasons Death Wish did so well is that Bronson spent so many years refining his stock character of the mumbly, no-nonsense tough guy, reluctantly pushed into picking up his guns or clenching his fists.

One week before Paramount released Death Wish, in July 1974, United Artists released Mr. Majestyk, an equally violent action picture (albeit less grim overall), with Bronson playing another strong man who would prefer not to have to kick as many asses as circumstances demand. Bronson is Vince Majestyk, a Colorado melon farmer who stands up against a criminal syndicate and the local law when he hires migrant day laborers to bring in his crop, rather than using the local mob’s drunken goons. Unwilling to wait around for the cops to do their job—or for the mafia to rub him out—Majestyk sets a trap for big boss Frank Renda (Al Lettieri), ambushing him at his mountain cabin, leading to a chase and a shootout across rugged terrain, just like in an old Western.

Mr. Majestyk was directed by Richard Fleischer, a Hollywood veteran who specialized in action-adventure and thrillers, and who could usually be counted on to deliver an unfussy, well-made film. That’s certainly the case with Mr. Majestyk, which was written by Elmore Leonard, and sports Leonard’s usual strong plotting and character-building. The dialogue isn’t as flavorful as Leonard’s best work—actually, the last third of the movie is almost dialogue-free—but the slight story develops well, showing Majestyk and Renda developing a real antipathy for each other through a series of confrontations that start small, then escalate. The violence isn’t unmotivated, or generic. Fleischer and Leonard establish the setting and premise well enough that it’s damn near tragic when Renda shoots up Majestyk’s watermelon crop. And Bronson establishes Majestyk’s bullshit-averse approach to life, such that it makes perfect sense that he’d confront Renda directly, saying simply, “Let’s finish it. I got work to do.”

The 1975 Bronson Western Breakheart Pass isn’t as well-known as Mr. Majestyk, perhaps because it doesn’t have such a cool title—or names like Elmore Leonard and Richard Fleischer in the credits. (It was written by Alistair MacLean, the author of the novels Ice Station Zebra, Where Eagles Dare, and The Guns Of Navarone.) But it’s a nifty little adventure picture, not unlike Fleischer’s 1952 noir classic The Narrow Margin. Bronson plays John Deakin, an undercover government agent who poses as a wanted outlaw so he can be captured and transported on a train, where he hopes to find out what became of a cache of stolen guns. As the train rolls through the snowy hills, people keep turning up dead, just as a horde of outlaws encroach. The contrast between the train’s tight spaces and the vast empty spaces outside creates a simultaneous feeling of confinement and remoteness.

Breakheart Pass sports some spectacular stunts—including a train-top punch-out that ends with one of the fighters taking a fall off a trestle, loudly clunking his head off the wooden beams on his way to the ground—and it has a plot as enjoyably twisty as a winding mountain railroad. The movie also offers an unusual spin on a classic Hollywood genre, not just by working in elements of a drawing-room mystery and a spy picture, but by starting in a relatively civilized part of late-19th-century America and then rolling way out into the wilderness, becoming more of a Western as it goes.

But Breakheart Pass is mostly a good example of the kind of movie Bronson made a lot of in the 1960s—an ensemble piece, with actors like Ben Johnson, Richard Crenna, and Charles Durning—only with Bronson at the center rather than as part of the support team. It’s a position he’d worked to earn. In movies like Mr. Majestyk and Breakheart Pass, Bronson held that center well, treating bad men like chores he had to dispatch quickly, so he could go back to being low-key.

Like Bronson, these new KL Studio Classics Blu-rays are discs of few words. (Translation: No extras.)