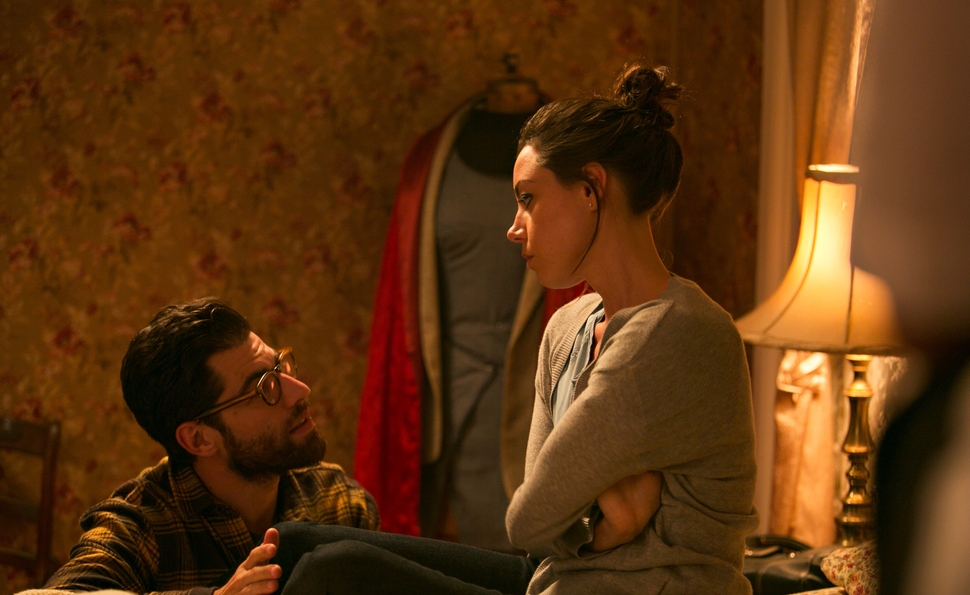 Jesse Zwick’s debut feature About Alex is a prime example of a particular over-represented subgenre of independent film: the earnest, plotless dramedy, populated by TV stars on hiatus from their series, playing characters who gather and then keep talking until they’ve revealed all their backstories and aired all their grievances. In About Alex, the inciting incident is the attempted suicide of the title character, played by Jason Ritter. Alex’s college friends come to his country house, reuniting for the first time in years. There’s Ben (Nate Parker), a reporter struggling to write a novel; Siri (Maggie Grace), whose relationship with Ben is being tested by their divergent life plans; Josh (Max Greenfield), an acerbic, misanthropic Ph.D. candidate; Isaac (Max Minghella), a successful player in high finance; Kate (Jane Levy), Isaac’s 21-year-old girlfriend, the outsider to the group; and Sarah (Aubrey Plaza), the perpetually dissatisfied career woman whose decision to become a lawyer instead of a restauranteur mirrors her decision to keep sleeping with Josh instead of making a play for Isaac. This septet plays out over a Big Chill weekend of eating, dancing to records, getting loaded, arguing, and asking over and over, “What happened to us?”

Nobody in About Alex uses the words “big” and “chill” together in that order, but Zwick does attempt to cover for his film’s derivativeness by having Sarah suggest they give the name “Jeff Goldblum” to a stray dog that the guys find. Later, Sarah says of the gathering, “This is like one of those ’80s movies!” Getting even more meta (though the movie never acknowledges this openly), About Alex comes from the son of an established mainstream filmmaker in Zwick, and stars two more descendants of showbiz families in Ritter and Minghella. In other words: The film comes by its copycatting honestly.

Zwick has some skill, as both a director and a writer. He puts the house and its surroundings to good use, making the movie look warm and homey; he moves the various pieces into place quickly, getting everybody together and conversing within the first 15 minutes. And while there’s way too much expository dialogue of the “How’s that follow-up to your New Yorker short story going?” variety, About Alex has a few snappy lines, too. One advantage of hiring veteran television actors—even relatively young ones like this lot—is that they know how to bring charm and personality to a film, even when they’re just sitting around and talking for an hour and a half. If About Alex were the pilot to a new television series, there’d be reason to stick around for a few episodes, if only to see these actors grow into their roles and develop more chemistry.

But About Alex isn’t television, and Zwick never really solves the problem of how to make a houseful of semi-likable characters into cinema. At times, About Alex feigns at being about how the relationships between a previously tight-knit circle of friends have been affected by the age of social media, where people can read Facebook status updates and check Instagram and feel like they’re staying in touch. In one of the movie’s strongest scenes, Alex’s friends confront him over his suicide attempt, and admit they didn’t reach out to him or even answer his calls because his recent Twitter updates kind of freaked them all out. But moments like this are thin on the ground in About Alex, which more often has the principals reminiscing about old times, re-fighting old battles, and judging each other’s lives since college.

A common stumbling block to movies like this is how to make compelling drama out of people who only talk about what they did in the past. It can be done—The Big Chill, again, is a big case in point, as is John Sayles’ Return Of The Secaucus 7—but more often than not, this kind of screenplay comes across as a cost-effective, quick-and-easy way for writers to do something with a bunch of characters drawn from their own lives. Zwick tries to make the idea of crumbling college relationships into something resembling an actual crisis, and he means to offer some insight into the choices and complications facing youngsters today as they transition from their late 20s to their early 30s. But he fails to work those ambitions into an actual story where these characters take action. Put it this way: Throughout About Alex, these friends remember the epic adventures they used to have in college. If they gather again in five years, almost nothing that happens in this movie would make that cut.