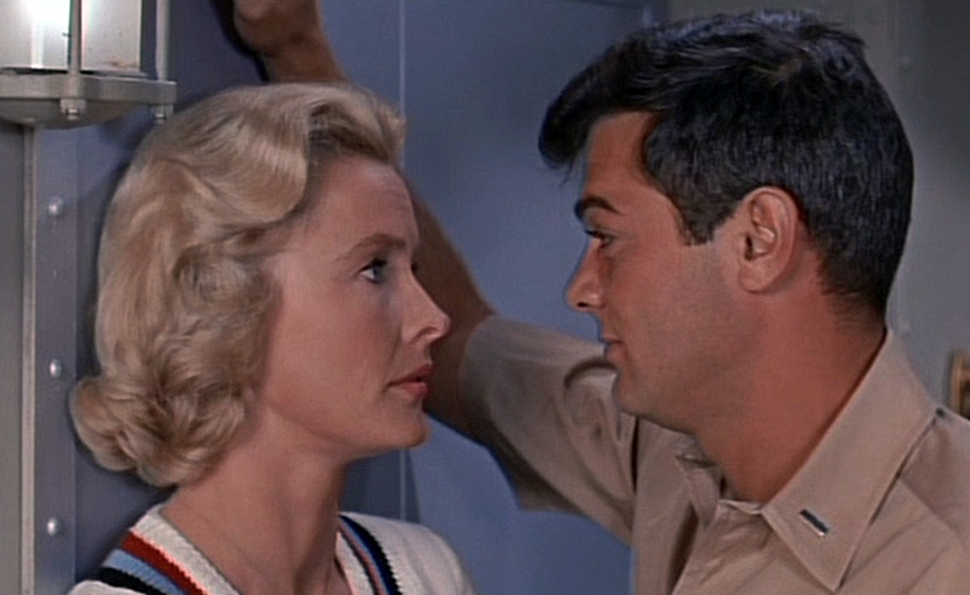 It’s hard to imagine a war movie with less interest in war than Blake Edwards’ Operation Petticoat, which came out in December 1959, and became 1960’s third-top-grossing film. Then again, it might be a stretch to consider it a war movie, even though its plot revolves around the wackiest submarine in the Navy at the beginning of World War II, and the diverging agendas of Rear Admiral Matt Sherman (Cary Grant) and Lieutenant Nick Holden (Tony Curtis).

Sherman is eager to get his battered shell of a submarine in fighting shape so it can get back into action and do its part to win the war. Holden, whom Curtis plays as a more lovable, less evil version of his incorrigible schemer from Sweet Smell Of Success, sees the Navy and the war through the prism of his own insatiable self-interest. He’s a man with larceny in his blood who sees the world as an endless series of green lights for him to speed through in his endless quest to fatten his pockets and better his standard of living. In other words, he’s a regular Sergeant Bilko, to cite a television program the film often resembles.

The filmmakers’ sympathies naturally seem to lie with Holden. If anything, the film is even less eager to see actual combat than Holden is. Since Edwards went on to specialize in sex comedies and slapstick romps featuring Peter Sellers—most notably the Pink Panther series—perhaps it’s not surprising that the film is much more interested in girls than in guns.

The film’s submarine, Sea Tiger, is barely seaworthy, but it sees action of a different kind when it picks up five attractive Army nurses whose presence has a powerful, unprofessional effect on the vessel’s fragile ecosystem. The submarine quickly becomes an underwater hotel, acquiring more and more unlikely guests, including a pregnant woman about to deliver, and even a goat. Shenanigans ensue as Holden uses the war as an excuse to run wild and execute schemes ranging from securing parts for the sub by running a makeshift casino, to stealing a pig from a nearby farmer.

All these monkeyshines and tomfoolery seems more appropriate to a sitcom. Aside from its similarity to Sgt. Bilko/The Phil Silvers Show, Operation Petticoat spawned a tardy television adaptation in 1977, with John Astin in the Grant role, and Jamie Lee Curtis, Tony Curtis’ daughter, cast as one of the nurses. The film’s surprising absence of visual style suggests television as well, though some of the its inertness can be attributed to the limits of its claustrophobic setting.

There’s a distinct lack of forward momentum plaguing Operation Petticoat, which takes forever to get going, and even then only moves in fits and starts, plot-wise. At least it’s consistently amusing, even when it’s seemingly heading nowhere, and taking its sweet time to get there. The film is further weighed down by a clunky framing device that finds the now-grey Sherman revisiting his old ship decades later, and re-reading the diary that launches the action via flashback.

But while Operation Petticoat is sometimes stilted, and it strands Grant in a role that mostly just has him reacting to his subordinates’ scandalous antics, it’s also consistently funny, and a terrific showcase for Curtis. With Curtis as its presiding example, Operation Petticoat depicts the Navy as an aggregation of dopes and dupes easily manipulated by sharpies like his incorrigible schemer. (There’s a great final joke, albeit an unintentional one, in the closing credits, which gratefully acknowledge the Navy’s full participation and cooperation in making the film.) There are a lot of inspired jokes scattered throughout Operation Petticoat, like a folk-singer seaman whose bleak ditties all involve certain death, and while it’s a shame Blake Edwards and screenwriters Maurice Richlin and Stanley Shapiro (who were nominated for an Oscar for their work here) didn’t design a sleeker, less clunky vehicle to house them, the film is pretty damn entertaining all the same.