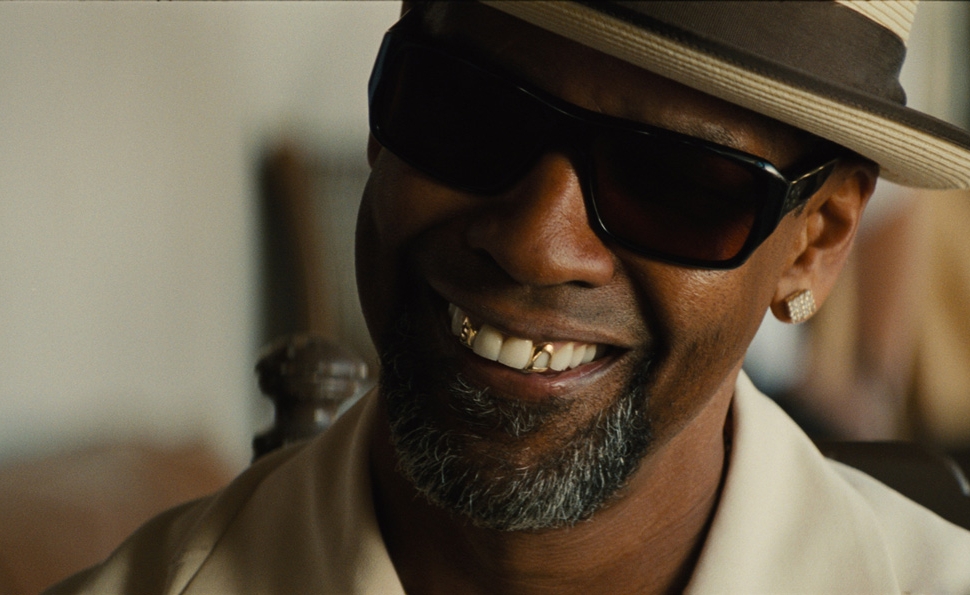 For a while, 2 Guns looks like it’s going to be a study in what separates the bad from the awful. In an early sequence, Bobby and Stig (a pair of partners in crime played, respectively, by Denzel Washington and Mark Wahlberg) travel south of the border to the compound of Papi (Edward James Olmos), a drug lord with a sideline in animal husbandry, and a specialization in easily angered bulls. (Yes, this detail will pay off later.) The pair exchange a stack of forged passports, but Papi offers them cash instead of the cocaine they expected. Bobby politely refuses and says he’ll simply collect it later, a deal being a deal. Outside, Stig is incensed by a bunch of thugs using chickens buried up to their necks as target practice. It’s cruel and they’re terrible shots, so he takes a gun and blows the chickens’ heads clean off to make it stop. What Bobby and Stig do isn’t nice, but they do it professionally, and with a code of honor. Or so it seems.

Scripted by Blake Masters from a comic-book series written by industry veteran Steven Grant, 2 Guns quickly upends everything viewers think they know about its protagonists. Both men have loyalties they’ve kept hidden from the rest of the world, and each other, but that hasn’t stopped them from falling into an easy, banter-rich rapport that looks a lot like genuine friendship. And while neither Washington nor Wahlberg reveal new depths, their charismatic work is a reminder of why they became stars in the first place: Washington is smooth and charming, Wahlberg talks fast, and both keep an aggressive edge just under the surface of their smiles. They play well together, and the script keeps their exchanges crisp, both as their characters work side-by-side, and later, when they’re at odds.

Before the split, however, they work well together toward the common goal of knocking over a bank in a small Texas town, an institution with a safety-deposit box they believes holds the money Papi owes them, and maybe a little more. They go about the job methodically, first burning down a cop-favorite diner across the street, then returning the next day to finish the job. When they discover the bank holds a lot more than Papi’s money, their success starts to look problematic. And when Stig and Bobby each figure out that the other wants all the money for himself, their troubles begin in earnest, though they can’t explain their planned betrayals to each other without revealing their true identities. A steady parade of supporting players, including Paula Patton, Bill Paxton, Fred Ward, and James Marsden, thicken the plot as the pair’s friends, enemies, or some combination of the two, giving 2 Guns even more characters who have one face they show the world, and another they keep to themselves.

Icelandic director Baltasar Kormákur—who made his American breakthrough in 2012 with the no-nonsense Contraband, also starring Wahlberg—loses his grip a bit at the end, but he keeps what could be a ball of confusion from growing unwieldy while pushing the plot forward. Kormákur lets his stars balance the buddy-movie levity with just enough dramatic weight to keep it grounded, and his directing style seems like a conscious corrective to the disorienting cutting and obvious CGI effects that have come to dominate Hollywood action films. 2 Guns’ setpieces are gripping, rough, and blessedly coherent, whether Kormákur is staging a hand-to-hand tussle in the desert or blowing up half a naval base, window by window and floor by floor. It’s tempting to call what Kormákur does here a throwback, but really, it looks like a model others should be following.

Eventually, the film becomes a bit much. Its crosses, double-crosses, and mixed signals turn into a Burn After Reading-like tangle but without any satirical bite, and its characters threaten to flatten into caricature as the film’s lightness hardens into glibness and cruelty. In other words, 2 Guns starts to look like any other modern action movie, and live down to its generic title. But that’s a late development in a film that otherwise gets right what many other genre entries get wrong, mixing charm, gunfire, and squealing tires while studying the dirty business of men who long ago crossed over to the wrong side of the law, for what they once believed were all the right reasons.