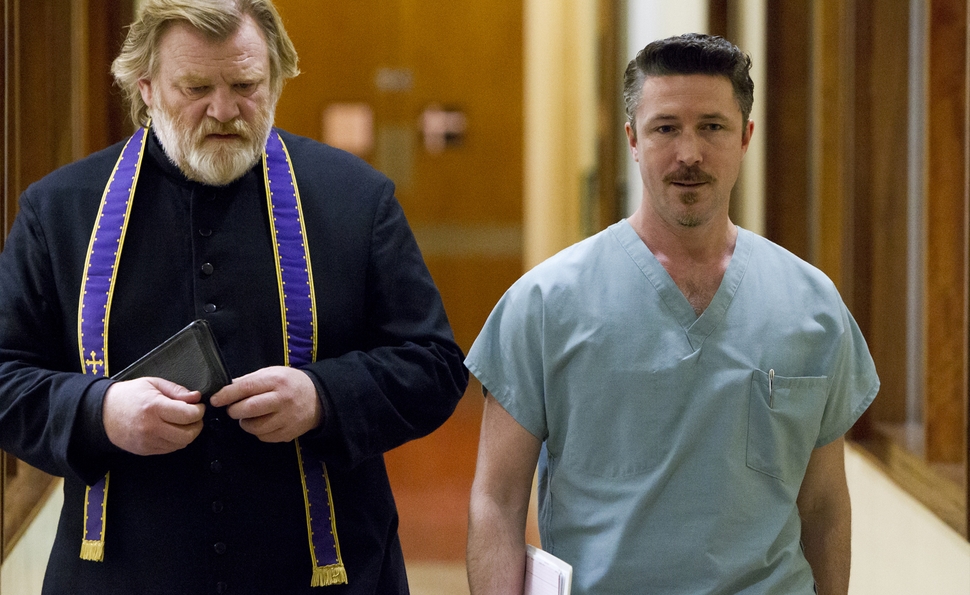 Calvary is none too subtle about equating its protagonist with Jesus, as it watches him willingly and knowingly set himself up to die for other people’s sins. Even if it were possible to miss the reference in the text, it’s right there in the title: The film follows the road to Calvary, and the struggles, decisions, and downfalls along the way. But John Michael McDonagh’s follow-up to his feature debut, The Guard—Ireland’s biggest independent box-office success of all time—is subtle in other ways. While it’s less playful and less giddily, enjoyably excessive than The Guard, it explores similar ground, as a good-hearted man largely abandoned by his community attempts to do the right thing as he sees it. But it brings in much more complicated matters of religion and morality, asking what it means to be a man of faith in an age of doubt.

McDonagh again puts The Guard star Brendan Gleeson in a perfectly fitting role as a rough, emotionally clumsy bear of a man whose stolidity and intelligence seem undervalued by the people around him. As the senior priest in a small Irish parish, Father James Lavelle is taking confession when the man in the other side of the booth reveals that as a child, he was systematically molested by a Catholic priest, and the pain and humiliation destroyed his life. To avenge himself, and in hopes of shocking the Church, he plans to kill Father Lavelle in one week, specifically because Lavelle is a good man and innocent of wrongdoing. Father Lavelle knows his parishioners well, and knows exactly who made the threat. (Viewers shouldn’t bother guessing based on the voice; McDonagh knew the trailer would be analyzed for clues, and the actual voice used is a red herring.) What he doesn’t necessarily know is whether the man will follow up. Lavelle could turn in the confessor at any time, or confront him and try to change his mind. Instead, he respects the sanctity of the confessional booth and waits out the week, processing his own emotions and continuing to patiently attend to his flock.

What follows is partially a modern-day, small-Irish-town The Last Temptation Of Christ, and partially an Agatha Christie mystery in reverse, less whodunit than who’s-going-to-do-it. As Father Lavelle makes the rounds among his flock, virtually all of them become suspects: Anger, despair, and contempt for the Church, or for God, or for the world, seethes through the locals when they talk with him. One of Calvary’s most compelling aspects is that people like the town’s grotesquely morbid doctor (Game Of Thrones’ Aiden Gillen, sporting an even stranger, barkier accent than he uses on the show) and its resident jaded, self-destructive aristocrat (Dylan Moran) seem to respect and even like Father Lavelle as a person. But when he comes around, they unload their bile on him unstintingly, as if they feel it necessary to publicly prove their contempt for the very idea of a moral compass. Lavelle isn’t a particularly spiritual man—as a priest, he’s more weary counselor and one-man support network than Bible-banging true believer. But the parishoners determined to hurt themselves and each other—like all three members of a spitefully aggressive, adulterous love triangle between characters played by Orla O’Rourke, Chris O’Dowd, and Isaach De Bankolé—seem to want to hurt Father Lavelle as well, as if they could, through him, somehow slap God’s face and demand His attention and explanations.

With The Guard, McDonagh created a story where Gleeson’s character responded to his isolation by crudely mouthing off, amusing himself by being infuriating and insensitive. Here, Gleeson’s character wanders, determined and melancholy, through a crowd of people who seem just as pained and prickly as he was in the last film. His only really warm human connections are with his adult daughter Fiona (Kelly Reilly), who was born before he took his vows, and with a frail but amiably whiskey-soaked old novelist (M. Emmet Walsh). Fiona is fragile after a suicide attempt, and the writer (in the film’s credits, just “The Writer”) is nearing the natural end of his life, but in spite of the sadder elements of their lives, their warmth buoys the film past miserablism or wallowing.

They also help ground the film in a more low-key, human sensibility, which it sorely needs: The dialogue sometimes reaches a histrionic pitch, and its characters border on caricatures. Fiona and the writer don’t entirely pull the story back from a purely metaphorical plane where Father Lavelle’s town consists solely of conceptual representatives of doubt and dissatisfaction. At times, they don’t seem like individuals, so much as conflicting ideologies given a thin veil of flesh.

Like The Guard, Calvary was beautifully shot by Larry Smith, and its windswept seascapes and cloud-blanketed moors are their own kind of troubled character, one that implies the presence of God as a brooding, silent, waiting figure rather than one actively involved in the many plights of Father Lavelle and his flock. There’s a heavy grimness hanging over the film, as its protagonist heads toward the end of the week, and an encounter that may not even happen, or may amount to his crucifixion. But that sense of doom gives Calvary an edge of thrill, as well. As old and foreordained as some of these dance steps seem, there’s always the chance that McDonagh will play a different tune.

Watching Gleeson follow in Christ’s footsteps in a variety of ways, some almost literal, comes at the Last Temptation question from another angle: What if Jesus had decided, instead of turning the other cheek, to turn in a different direction? McDonagh doesn’t answer this question—or many others, since Calvary is more questing and philosophical than didactic—but he does offer some new insights. His film amounts to a Bible story more spiritually and emotionally accurate than most Bible adaptations actually put on film.