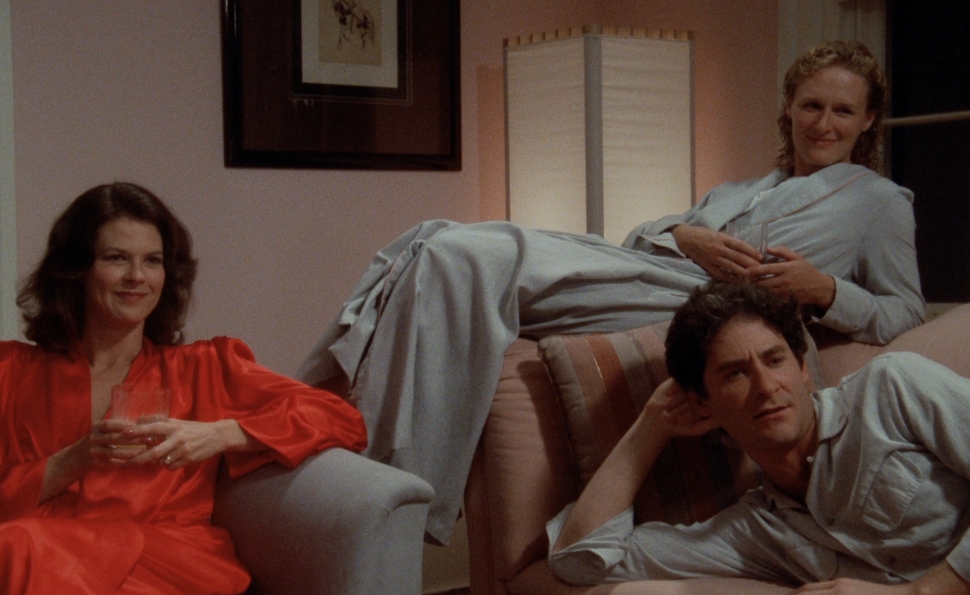 When younger generations complain about the self-involvement of Baby Boomers, The Big Chill, Lawrence Kasdan’s second film as a writer-director, often gets held up as an example of what they mean. The 1983 film is, after all, a movie in which a group of adults who came of age in the 1960s sort through what they’ve become while reflecting on the times that made them, one powered by the sounds of yesteryear and filled with characters for whom the past looks a lot brighter than the present. For those who weren’t alive in their glory days, it can play as yet another Boomer nostalgia item reminding everyone else they missed it, man. Yet as generous as the film is to its characters, it also keeps finding ways to criticize their myopia.

Of the eight main characters gathered to mourn the death of the never-seen Alex, seven have known each other for many years, having met as idealistic students at University Of Michigan at the height of campus radicalism. But the eighth, the quiet, cryptic Chloe (Meg Tilly), is a newcomer, the younger girlfriend Alex left behind. She’s not exactly of a different generation, but she’s young enough not to get their references, to say nothing of their shared experiences. While others probe their shared history to figure out when things went wrong, for Alex but also for themselves, Chloe sees it as an act of self-indulgence, saying, “I don’t like talking about my past as much as you guys do.”

For all the reflectiveness on display in The Big Chill, there’s an underlying suggestion that its characters’ advanced introspection might not be doing them any good, and that it might just get worse as they get older. The appearance of a video camera, which plays a role in a few key scenes, doesn’t foreshadow the arrival of YouTube so much as the seemingly endless stream of 1960s-themed movies and TV shows produced in the years that follow. Yet even though it’s aware of their narcissism, The Big Chill still views its characters sympathetically, even when they do little to invite much sympathy themselves.

The film is set almost entirely during Alex’s funeral and the days that follow, when the reunited mourners decamp to a large country house owned by Sarah (Glenn Close) and Harold (Kevin Kline). In addition to Chloe (who was staying in the house with Alex before his death), their ranks include Sam (Tom Berenger), the star of a cheesy TV action show; Nick (William Hurt), an impotent radio psychologist turned drug dealer; Michael (Jeff Goldblum), a journalist now working for People magazine; Meg (Mary Kay Place), once a public defender, now a high-powered corporate lawyer; and the unhappily married Karen (JoBeth Williams).

Over the course of the weekend, they cook, drink, get high, dig up old grudges, revisit old crushes, question what they’ve become, and lament the way the world hasn’t accommodated their ideals. It’s this last element that drives both the characters and the film, much more than any plot. Not that plot’s entirely absent: Meg wants to get pregnant, Nick battles with impotence, and everyone tries to unravel Alex’s suicide. (It’s the film’s darkest joke that Alex stayed closest to his ideals and experienced the least material success.) But it’s disappointment in the present that unites them as much as their shared past. Reflecting on her time as a public defender, Meg doesn’t like that she ended up calling most of her clients “scum,” but doesn’t really regret choosing comfort over ideals, even if she recognizes comfort exacts a cost that has nothing to do with money. “It’s a cold world out there,” she says. “Sometimes I feel like I’m getting a little frosty myself.”

Kasdan co-wrote the film with sitcom veteran Barbara Benedek, and the script occasionally leans a little on one-liners and easy gallows humor. Characters dart in and out of scenes to deliver witty remarks and look for chances to crack wise rather than engage with the grimness. While that usually seems like part of their personality, it occasionally plays like a script that hasn’t had all the unnecessary cleverness scraped away from it. The best moments, however, cut deep, and the shapelessness becomes a virtue. While some characters leave the film in better shape than they enter it, The Big Chill doesn’t peddle easy epiphanies or offer any reassurance they’ll be happier once they leave each other’s company. The film originally ended with a flashback to their college days, a scene in which the then-unknown Kevin Costner played Alex, but Kasdan was wise to cut it and make the past and their absent friend things the characters remember, even if they remember them differently.

The Big Chill is famous for its soundtrack, an assemblage of 1960s favorites from Marvin Gaye to Creedence Clearwater Revival, put together when those who lived through it were still figuring out the generational canon. There’s no Dylan there, but the best parts of the film feel inspired by “Tangled Up In Blue,” Dylan’s Blood On The Tracks song that finds its narrator wondering how people who start out together end up in such different places: “Some are mathematicians, some are carpenter’s wives.” Kasdan’s film brings one such bunch together and lets them discover that who they used to be and who they are now have much in common. But what that means, if it matters at all, whether that knowledge will prove helpful or make them any happier, and where they go from here remain open questions.

Special features: This new Criterion edition of the film offers an interview with Kasdan reflecting on his career, deleted scenes (though not the flashback), a trailer, a 1983 appreciation from critic Harlan Jacobson, and an excellent piece from Lena Dunham, who captures the way the film can speak to generations other than the one at the center of the film. But the two best features are a typically good, hourlong Laurent Bouzereau documentary made in 1998 for a previous DVD release, and a cast reunion held at the 2013 Toronto Film Festival. Both repeat some information, but the distance between them keep them true to the spirit of the film. They’re like class reunions where the attendees keep showing up to tell the same stories, looking a little older and more wistful as the years go by.