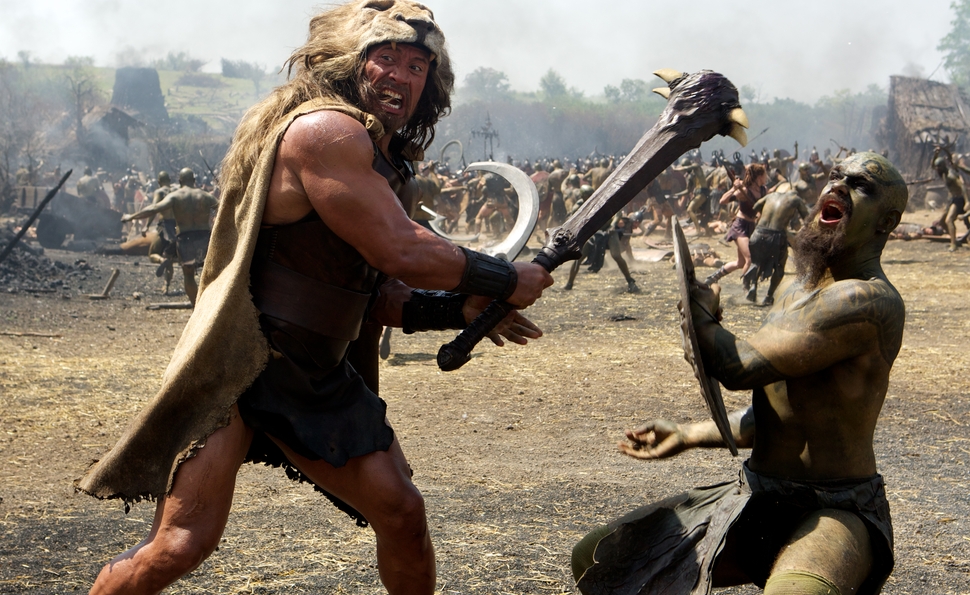 Hercules, this year’s second movie about the Greek demigod after Renny Harlin’s dire January release The Legend Of Hercules, opens with a bit of eyeroll-inducing narration that suggests it will be even worse than its predecessor. Recounting the origin and mighty deeds of Hercules (Dwayne Johnson), an unseen narrator notes that “His father was Zeus: the Zeus.” That, however, turns out the be the first bit of misdirection in a film filled with such moments. The voiceover comes courtesy of Hercules’ nephew Iolaus (Reece Ritchie) in an attempt to intimidate the pirates holding him captive. It’s also an example of how the stories of Hercules—slayer of the Nemean Lion, conqueror of the Cretan Bull, etc., etc.—have more than a hint of spin. Centuries before anyone had the ability to print the legend, he’s a man benefitting from the way legends have a way of superseding facts.

The film’s Hercules isn’t a nobody. Maybe he isn’t the son of Zeus—the Zeus, or any other—but he didn’t get the lion pelt he wears on his head from a furrier, and he has a way with a club, as he soon demonstrates to the pirates. He also has more than a little help, in the form of a band of compatriots assembled over the course of his journey. These include lifelong companion Autolycus (Rufus Sewell), the half-feral Theban Tydeus (Aksel Hennie), Amazonian archer Atalanta (Ingrid Bolsø Berdal), and Amphiaraus (Ian McShane), a self-styled soothsayer with a tendency to see his own death, and a fondness for the burning herbs he uses to tell the future. Yet despite their success, the band is on the verge of breaking up as the film opens, with Hercules vowing to make one last big score, then retire far from civilization. That opportunity presents itself via an offer from the Thracian king Lord Cotys (John Hurt), who needs a little help defending his turf from Rhesus (Tobias Santelmann), whose army may or may not include centaurs. Reports vary.

Adapting a comics series written by the late Steve Moore (though his friend Alan Moore suggests he wouldn’t approve of the adaptation), screenwriters Ryan Condal and Evan Spiliotopoulos keep finding ways to demythologize Hercules without deflating him. Johnson looks superhuman, which doesn’t hurt. If anything, his mere appearance makes the is-he-or-isn’t-he question linger a little longer than it should, even though he’s particularly good in scenes when he acts embarrassed at the stories that follow him around.

The film is a little less assured when revealing Hercules’ troubled past over the course of several flashbacks, one of several elements that feel a little too rote in an otherwise clever film. Also rote: an oversized finale that tries a little too hard to create the massive destruction of a modern blockbuster, using the elements of the ancient world. Yet otherwise, this surprisingly entertaining film brings out the best of everyone. Brett Ratner remains a director of no great distinction, but here, he proves himself an adept orchestrator of battle scenes, clearly presenting the forces on both sides, and using clear, coherent editing and dynamic compositions. The cast clearly enjoys itself too, particularly McShane and Hurt, whose performance makes the most of an unexpected late-film twist. What’s more, the film moves quickly, with none of the modern blockbuster bloat. No one will mistake it for an accomplishment on par with, say, defeating the Stymphalian birds, but as this movie’s Hercules proves, sometimes getting the job done is accomplishment enough.