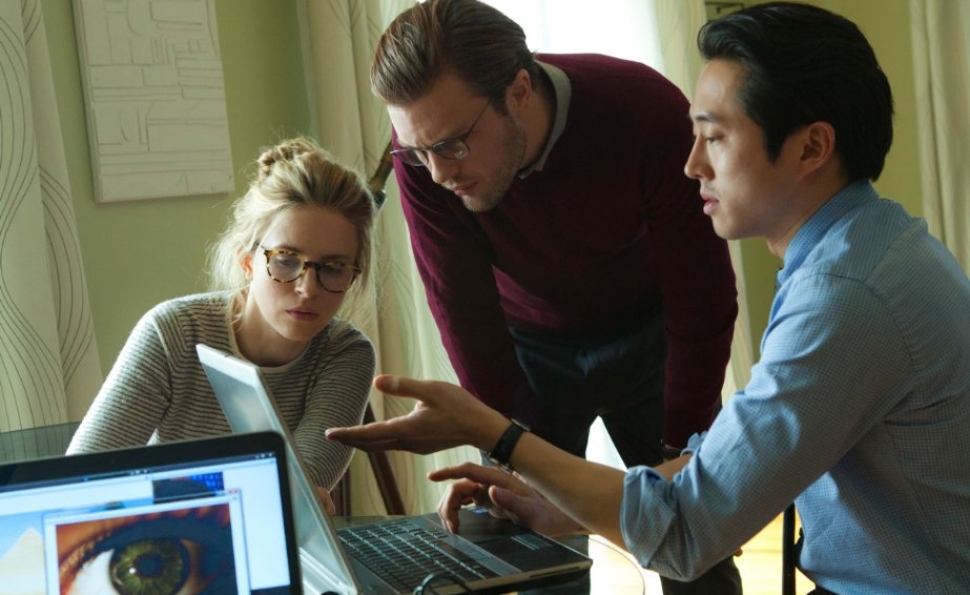 Low-budget science-fiction movies like Primer, Moon, Coherence, and Europa Report tend to take on a portentously serious tone. It doesn’t necessarily get in the way—those four movies range from clever and absorbing to exceptionally clever and absorbing—but it’s such a common approach for heady, inexpensive, concept-based science fiction that it now looks like indie filmmakers consider emotional intensity to be its own kind of standard-issue, world-building special effect, the ultra-inexpensive equivalent of explosions and lasers.

Writer-director Mike Cahill takes a different approach with his two low-budget science-fiction features, 2011’s Sundance Jury Prize-winner Another Earth and the new I Origins: Both films address their high-concept topics with a heavy dose of romanticism. They take their premises very seriously—if they don’t, who will?—but both add an extra layer of dreamy abstraction. Cahill’s script says all scientists are romantics at heart, then bears that out through a floaty story that’s simultaneously about the mechanics of a huge discovery and the feelings it stirs.

Michael Pitt (Hedwig And The Angry Inch, Boardwalk Empire) stars as Ian Gray, a molecular biologist obsessed with finding the missing links in the evolution of the eye, as part of a personal mission to debunk God. The human eye is too complex to have evolved, one creationist argument claims, but Ian thinks genetic manipulation of simple lifeforms can prove otherwise. His research gets a huge boost from new lab student Karen (Cahill’s Another Earth co-writer and star Brit Marling), who leads him down a particularly insightful path, but at the same time, he’s distracted by meeting Sofi (Astrid Bergès-Frisbey), a gorgeous model whose enigmatic behavior at a party hooks him in. Instinctively following a mystical trail that goes directly against everything he believes in, he finds her again. But their relationship is deeply troubled by the conflict between her flaky spiritualism and his grim atheism. When he loses her, the situation between them is unusually nuanced—Cahill never suggests they were soulmates, or anything else so cosmic. In a much more believable way, he simply conveys that Ian was so besotted in his opposites-attract relationship, and has such a need for closure, that it drives him to continue grasping at magical thinking when the inexplicable happens. Possibly his desperation opens him up to things he’d never begin to accept otherwise, or possibly that’s the one thing Sofi successfully taught him.

Many of I Origins’ pieces don’t hold together well. The film requires a large leap of literal faith, first in the mysticism (or serendipity, or unlikely coincidence, or divine intervention, or whatever) that brings Ian and Sofi together again after the party, then in the contrivances that follow. Ian’s scientific plan is left mighty vague, as are character-significant questions like whether his research drove him to his all-encompassing obsession with eyes, or vice versa. Pitt plays Ian as subtly angry and close-to-the-vest, in a way that conveys his drive while making him inaccessible and distant, both to Sofi and to viewers. He’s rarely a sympathetic protagonist, even in tragedy; he’s selfish and withholding, and in some cases downright mean. When the story goes in a direction with worldwide ramifications like Another Earth’s, it’s tempting to think viewers aren’t really meant to care what any of this means for Ian; he’s just an unworthy conduit for the information. (A short post-credits sequence bolsters that impression by opening up the story considerably.)

And some of the narrative choices are particularly sketchy, like framing Ian’s central science-vs.-spiritualism conflict as a standard-issue, Reality Bites-esque choice between two representative women, and the way the story ends just as it finally sets aside its many fuzzy, inchoate questions and reaches a point of real relevance. (Cahill is currently writing a sequel.) The emotionally tinged, character-based approach to a global discovery worked well in Another Earth, which looks at big events from the worm’s-eye view of a traumatized woman (Marling). A similarly huge discovery, filtered through a similarly traumatized protagonist, is more problematic here, largely because Ian is driving the decisions, and the film’s distanced, romanticized understanding of the world doesn’t jibe well with the decisive scientist Cahill wants Ian to be.

But I Origins still has its strengths, largely in the beautiful cinematography—the scenes shot in India are particularly striking—and carefully tuned execution of that delicate tone. The hypnotic, clicky soundtrack, Bergès-Frisbey’s playful yet sad performance, and a few significant script moments laying out the film’s philosophy all aim toward a sleepy trance that helps put the biggest flaws into soft focus. And the loosely edited sequences where Ian and Sofi enjoy their time together are extremely winning. Without expressly explaining their sexual and emotional spark, those scenes convincingly convey how people ignore their differences, and often their own best interests, when in the grips of infatuation. In a grimmer, harder-edged, more pointedly Important version of this story, this might all come across as self-important hoodoo. Seen through Cahill’s lens of poetic idealism, it’s more a proof that people do strange, contradictory things for love.