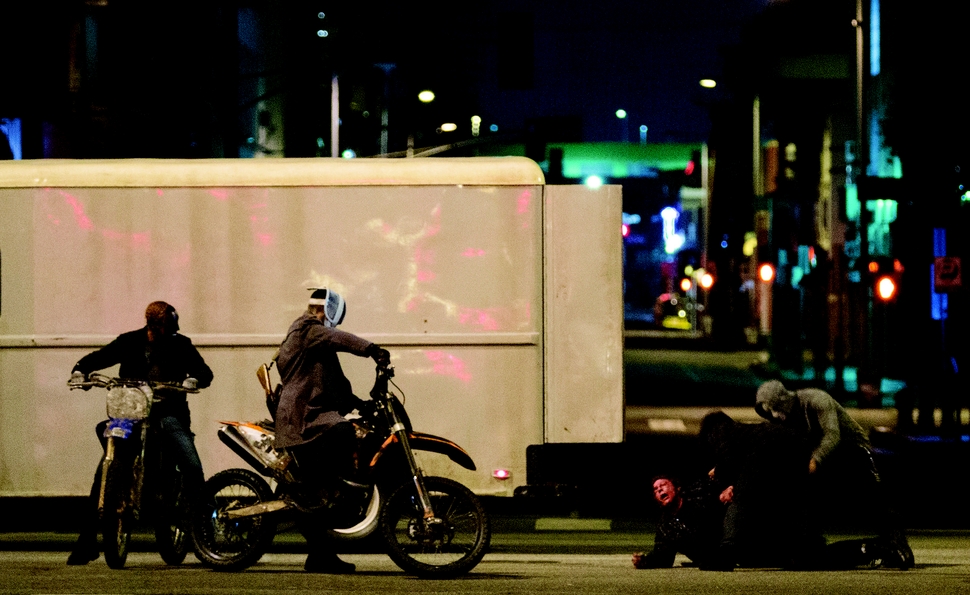 Last year’s high-concept home-invasion thriller The Purge was pure junk, all the more maddening because it set up a perfect B-movie premise, then did nothing with it. Writer-director James DeMonaco imagined an America that legally sanctioned all crime for one night a year, with an opening montage of wanton destruction scored to “Clair De Lune,” but then kept his sights on a boring rich family in a boring giant mansion wrestling with boring, unsubtle class metaphors. He suggested both a method and a madness that never fully materialized.

When the film made almost $90 million worldwide on a $3 million budget, DeMonaco’s true genius emerged: Here was an instantly sellable concept that could be infinitely repeated, with no need to retain the same actors, setting, or story, and with an “annual tradition” hook baked right into the marketing pie. So one year later, America is blessed with The Purge: Anarchy, a film that from its hilariously redundant title on down (isn’t the Purge already, by its nature, anarchic?) lusts for stupidity the way its characters lust for blood. The film should have been called Binge And Purge, or perhaps The Splurge.

With an actual budget, the festivities can now spread across an entire city’s blood-soaked streets, just as this film’s New Founding Fathers intended. With the closed-off moroseness from the first film cast aside, the broader canvas is all the better for appreciating the Purge’s perfect idiocy. The movies are inching closer to the Roger Corman style of unbridled surrealist mayhem they desperately want to become, though they aren’t entirely there yet. An early, bizarre shot of sword-wielding, fancy-dressed rich folk lording over their prey in their tarp-covered mansion comes close, as does the garish genius of a climactic auction sequence that segues into a new meaning on the phrase “class warfare.” But other scenes have a nasty tone, as when a violent drunk threatens to murder an attractive woman for resisting his advances. The real-world shame of the moment is too strong for this type of movie.

Grafted onto this patchwork of hooliganism are characters who have been airlifted in from other action movies. There’s the struggling single mother (Carmen Ejogo) and her wisecracking child (Zoë Soul); the couple on the rocks (Kiele Sanchez and Zach Gilford), who rekindle their relationship in the face of certain death; and the grizzled loner on a revenge quest (Frank Grillo), whose stone-faced non-answer to the question “What’s your name?” provides the movie’s second-biggest laugh. The biggest laugh is reserved for Michael K. Williams, in the Samuel L. Jackson role as the profanity-spewing, hard-raging leader of an anti-government separatist movement. He’s only in a small number of scenes, and every second the camera is not trained on him is a wasted opportunity.

Due to various circumstances, the folks who are not Michael K. Williams must let their emotional guards down and depend on each other to survive the Purge. So begins the night of fleeing and shooting at the roving gangs of law-abiding Americans in hockey masks, although the gruff loner does most of the shooting, while the rest cower uselessly behind him. Apart from the murders, the Purge looks surprisingly tame for a night when anything goes—there’s no property damage to speak of, no looting, no arson. Detroit has dealt with worse than this on Devil’s Night. The class allegories are still front and center, which renders them, on the whole, more obnoxious than the politics of other mindless action movies. Zombies have a point of view about societal conformism, but they can’t talk, so it goes down easier.

Because some will insist otherwise, it needs to be emphasized again for the record that The Purge: Anarchy is a tremendously stupid film. The script is filled with unnecessary characters, the story spends forever building to payoffs that sputter and die, and the hate-the-rich angle is so blunt that Occupy Wall Street would cry for more subtlety. But there’s an almost-camp quality to how DeMonaco takes this stupidity to greater heights, building a complex mythology around the plot like a giant moat around a pillow fort. (When a government is already encouraging its citizens to kill each other, is anyone surprised to learn it might be secretly joining in the fun?) As with the Saw franchise, this series seems destined to become the topic of immense cultural debate about the mechanics of death at play in this decade’s chosen violent entertainment franchise, and whether they throw a mirror onto society at large. When the zeitgeist moment arrives, remember that The Purge: Anarchy features not one but two separate instances of cars breaking down at the worst possible moment, and let the thinkpieces run their course.